Top 9 Things To Do In Quebec City 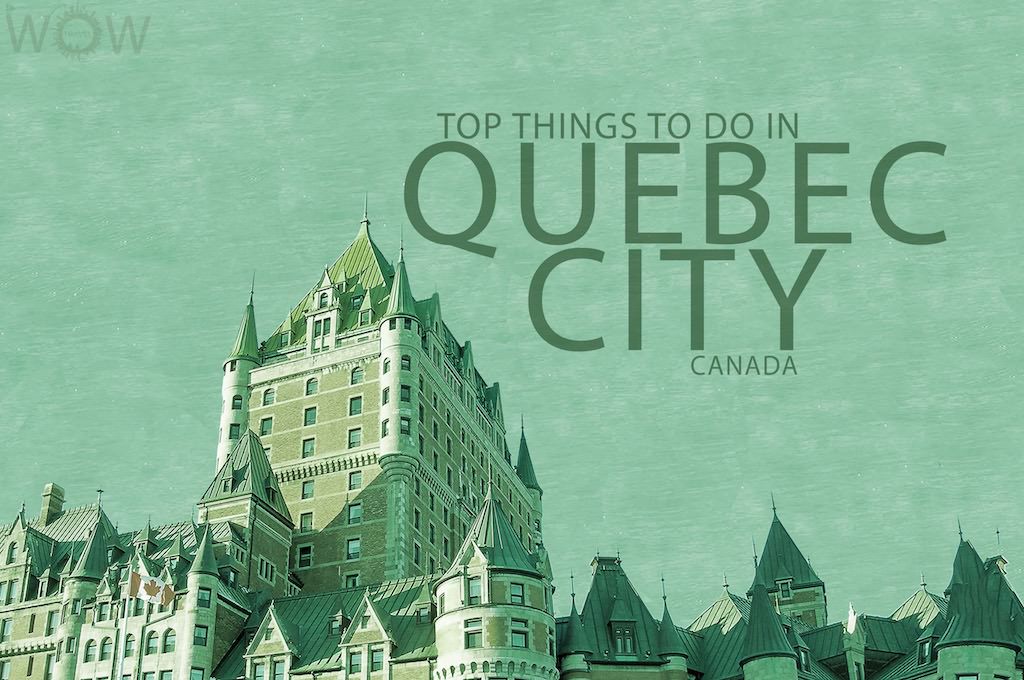 Loaded with history and culture, Québec City is unique among North American cities and maintains its European roots with a predominantly French-speaking society. With its cobblestone streets, 17th and 18th-century architecture and outdoor cafes, Old Québec has a European-style charm. It is a magical wonderland in the winter and a breathtaking landscape in the summer time. Here is our list of the Top 9 Things To Do In Quebec City.

The Port of Quebec is an inland port and the oldest port in Canada. The harbor dates from the 17th century when ships brought supplies and settlers to the new colony. Nowadays it is a popular cruise destination. You will love the charm of rue Saint-Paul, with its inviting antique shops, art galleries, sidewalk cafés and the Old Port Market that has a large variety of seasonal foodstuffs or produce for sale, including locally-made cheese, deli meats, baked goods, fresh fruit and vegetables as well as fine food items.

Sainte-Anne-de-Beaupré, located only 20 minutes outside of Québec City, is the second oldest pilgrimage site in North America. Each year, over a million and a half pilgrims and visitors come to the Shrine to spend some time in peaceful prayer and reflection.

This small but picturesque plaza is famous as the birthplace of French America. It is where the city was established in the early seventeenth century and where Samuel de Champlain chose this site to construct a trading post in 1608. It grew throughout the 17th and 18th centuries to become a bustling town marketplace and the heart of business and industry in Quebec City.

This grande dame, which lords over Quebec City from a cliff overlooking the St. Lawrence River, is one of the most photographed hotels in the world. This heritage urban resort will seduce you with its breathtaking views and the architecture of the Old fortified City, designated a UNESCO World Heritage Site. In any one of its 611 guestrooms and suites, you’ll feel an elegant touch of historic Europe.

The star-shaped Citadelle, one of Quebec City’s most distinctive features, is open every day to explore the largest British military fortifications in North America, which is still in active use. The official residence of the Governor General of Canada and home to the Royal 22nd Regiment, you can take guided tours year-round and in the summer, you may even get to see the Changing of the Guard. If you enjoy a little spookiness, try the Ghost Tour of the Citadelle at night. Source: we3travel

Not far from Parliament Hill are the Plains of Abraham which are beautiful parklands and also the scene of the 1759 battle between the French and British Empires in North America. This green heart of the city is a community focal point and welcomes some 4 million visitors, both tourists, and locals, each year.

Quartier Petit Champlain is a historic neighbourhood in the Lower Town area of Old Quebec. It is known as one of the most beautiful sites of Old Quebec. Particularly magical during winter, illuminated by thousand of lights, the pedestrian streets offer a variety of interesting shops and restaurants in a romantic setting every season. There are lots of stores selling souvenirs, specialty items by local artists and craftspeople, jewelry and clothing.

Come experience one of the world’s largest winter carnivals, which take place every year in February. Every year, thousands of visitors flock to the Québec Winter Carnival to enjoy a host of activities for all ages, including snow bath, night parades, snow slides, giant foosball, snow sculptures, shows, sleigh rides, and skating. The Carnival is a unique winter experience you won’t want to miss.

The Quebec City Summer Festival is an annual 11-days music festival in downtown Quebec City which takes place, every year, in the first half of July. It is Canada’s largest outdoor music event festival and one of the most important music events in North America. The aim of the festival, since it was established, was to exhibit the art, the tourists’ centers and the economic potential of the city and its area. More than 300 musical shows take place indoor and outdoor venues throughout the city. During the festival days, the city turns to an artistic center where all the coffee houses and bars offer shows of jazz music, world music, electronic music, etc..