Top 13 Things to Do in Grand Rapids, Michigan 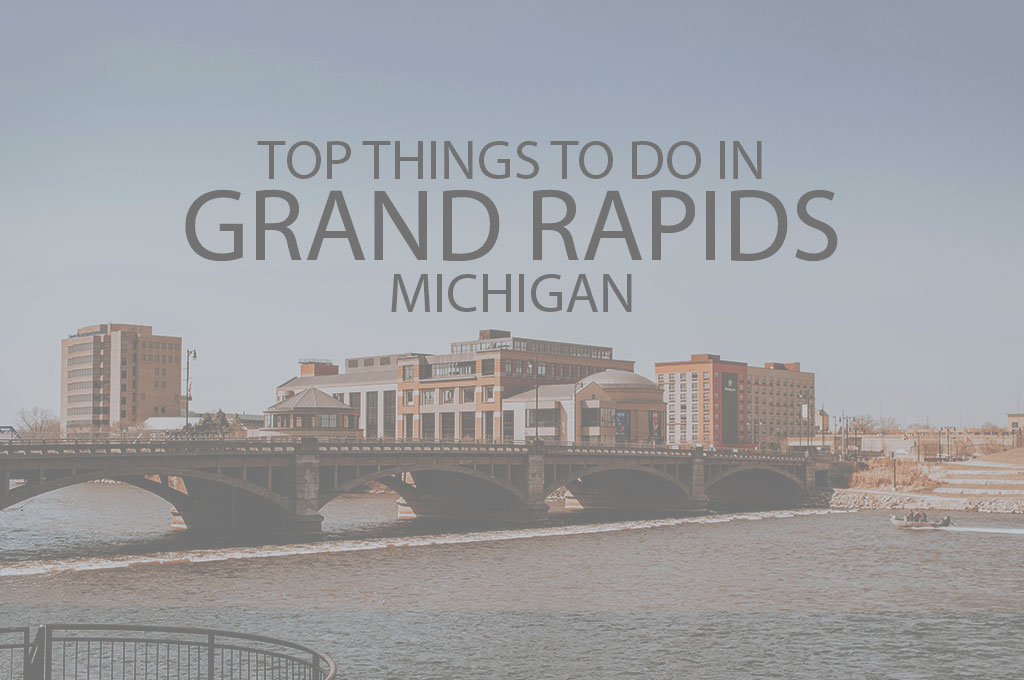 Michigan’s second-largest city Grand Rapids is named for the scenic Grand River and is well-known for its culture, art, and history. This city’s origins go back to 1826 when it was a trading post, eventually becoming the boyhood home of former President Gerald Ford. That’s why the city is home to unique museums, such as the Gerald R. Ford Presidential Museum. So, the answer to the question “What to do in Grand Rapids, Michigan” is very long, as it has a host of fun things on the list! For instance, there’s also the Sculpture Park, the Frederick Meijer Gardens, and the Frank Lloyd Wright-designed Meyer May House. Moreover, Grand Rapids also has many fun family attractions, including the John Ball Zoo and the Grand Rapids Children’s Museum.

Since Grand Rapids has also seen a lot of revitalization in the last few years, you’ll also see many locally-owned restaurants, commissioned street art projects, and urban parks. So, what are you waiting for? Here are the top 13 fun things to do in Grand Rapids, Michigan.

Strolling around the Frederik Meijer Gardens & Sculpture Park is one of the most fun things to do in Grand Rapids, Michigan. This 1995-opened destination is one of the world’s most famous sculptures. This major cultural, educational, and recreational Midwest destination sits on a massive campus. What’s more, it’s home to the largest three-story conservatory in Michigan with various rare and tropical plants, a rock garden, and a waterfall. Moreover, the park also has a wetlands boardwalk, picturesque forest trails, four-season outdoor gardens, and five themed indoor gardens.

Furthermore, the sculpture gallery is home to an internationally acclaimed collection of around 300 works by some of the best-known sculptors in the world. These include everyone from Alexander Calder, Henry Moore, Edgar Degas, and Auguste Rodin. These artwork are displayed all over the garden, among the extreme natural beauty of the gardens.

Frank Lloyd Wright designed the Meyer May House in 1908 for a wealthy clothier. The lovely structure, which was originally a modest-sized Prairie-style home, is one of the most faithfully restored Frank Lloyd Wright’s creations. Wright’s house designs are easily recognizable due to distinct touches such as a wall of windows, deep overhangs, and a low-pitched roofline. When the house was built, the style was not only shocking but also revolutionary for the affluent Grand Rapids neighborhood where it was built. That’s because most of the structures surrounding it were stately and old Victorian-style houses.

Today, this house is a free-of-charge museum, complete with reproduction and original furniture. You can also admire the 108 skylights and windows, which are a testament to Wright’s love for using leaded glass. There’s even a movie that chronicles the restoration and history of the property, including the lush grounds. In fact, the Meyer May House, and other Wright prairie-style homes, inspired the Prairie School, an entire school of architecture.

Discovering the Gerald R. Ford Presidential Museum is one of the most fun things to do in Grand Rapids, Michigan. This core of this 1981-opened museum is the permanent exhibit that showcases the highlights of the celebrated President and Mrs. Ford’s lives. It features not only an interactive holographic and video presentation but also allows you to experience the illusion of “participating” in history. Moreover, they even travel with the president to many of the world’s popular destinations. Moreover, there’s a holographic White House tour during Ford’s time, as well as a sound and light show describing a day in the Oval Office. Finally, there’s even a Watergate gallery with a six-minute and multi-screen history that’s particularly interesting. The best bit? The museum also hosts many special events and organizes many temporary exhibits.

The Heritage Hill Historic District is one for culture vultures and heritage buffs. Other excellent neighborhoods of Grand Rapids surround this gorgeous neighborhood. What’s more, it’s the oldest residential district in the city and is home to more than 1,300 homes. They’re spread across 60 different architectural styles and date from 1844 to the 1920s. The best way to explore Heritage Hill is by taking a self-guided walking tour of the homes that range from Prairie to the Greek Revival. In fact, all these people played a pivotal role in shaping the future of Grand Rapids. It’s no wonder that Grand Rapids today is very diverse and harks back to the time when the original residents called this place home.

Visiting the John Ball Zoo is one of the most fun things to do in Grand Rapids, Michigan. If you’re visiting Grand Rapids with your family, then the zoo is a fantastic place to visit as it’s home to all kinds and sizes of animals from all over the world. Some of the most popular habitats are the Red’s Hobby farm, Budgie Aviary, Treasure of the Tropics, the Mokomboso Valley Chimpanzee Exhibit, and many others. However, one of the best features is the many up-close animal interactions and experiences for visitors, such as the chance to feed pelicans, penguins, bears, and spider monkeys.

Further behind-the-scenes adventures include the hands-on experience with the animal ambassadors, such as handling small animals like birds and reptiles and observing a chimpanzee training session. Other activities include brushing a goat at the Hobby Farm, riding a camel, and trying your hand at zookeeping. Among the zoo’s many other residents include bald eagles, sloths, tigers, and African lions.

The structure that the Grand Rapids Art Museum sits in itself is a piece of modern art. The contemporary and magnificent structure features almost 20,000 square feet of gallery and exhibition space. In fact, it’s the world’s only museum that’s been certified LEED Gold for its environmental design. On the inside, the museum’s collections range from Modern Art all the way back to Renaissance. Moreover, there are special collections that focus on 19th and 20th-century European and American art. If that wasn’t enough, the museum also has 5,000 pieces of art, including more than 3,500 drawings, photographs, and prints. Finally, the place also invites adults to explore their artistic side weekly, is a venue for a yoga studio, and also organizes weekly music concerts.

The Calvin College Ecosystem Preserve is one of the most fun things to do in Grand Rapids, Michigan, for nature lovers. This outdoor teaching and research venue for Calvin College faculty and students focus on preserving animals and plants indigenous to the area and their habitats! What’s more, the Preserve is not just a learning ground for students but also for the denizens of Grand Rapids to enjoy the green spaces and learn about the natural world. You can hike through the Preserve and actually watch the seasons change, enjoy a picnic in the meadows, take photographs, and watch the birds. What’s more, the place also houses the Bunker Interpretive Center, which has an annual plant sale, learning programs for kids and adults, and seasonal displays.

Art lovers will certainly love the urban Institute for Contemporary Arts, which boasts a wide variety of modern artwork by both local and international artists. The themes include even performance and visual art! What’s more, the museum also hosts changing themed exhibits, which are designed to challenge and inspire visitors. It also sponsors programs, classes, and events for the public, as well as public art installations across Grand Rapids. If that wasn’t enough, it also hosts documentary and indie movies, theater shows, talks, receptions, and concerts throughout the year. Besides organizing the extremely popular Holiday Artists Market, the gallery also has docent-led tours.

The Fulton Street Farmers Market is one of the most fun things to do in Grand Rapids, Michigan. This 1922-established market is a Grand Rapids staple on Saturdays and is the oldest in the Grand Rapids region. In fact, it usually attracts more than 200 vendors every week. What’s more, most of them are farmers from the surrounding areas. On Sundays, the market sees artisans who sell an array of locally made handicrafts. This mostly outdoors, albeit tented market sells everything from delicious home-baked goods, jams, pies, pastries, and bread to lots of fresh vegetables and fruits. There’s even a small indoor hall for shops. Furthermore, many food trucks bring their goodies on days when the market is busy, which means an excellent lunch with local brews.

In 1854, the Grand Rapids Public Museum began life as the Lyceum of Natural History. The objective of the museum is to capture the spirit of West Michigan via authentic and immersive experiences that are also educational and entertaining. What’s more, the museum has three floors of permanent exhibits focusing on culture, history, and science, as well as many special exhibits around the year. In fact, there are more than 250,000 artifacts in categories such as fossils, furniture, zoology, automobiles, and so much more. That’s why the museum displays only a small number of artifacts at any given time. Some of the must-see exhibits are the Cook Carousel Pavilion and the Roger B. Chaffee Planetarium. Finally, there’s also a gift shop, the Meijer Theater, and a café to round up the experience.

The Blandford Nature Center is one of the most fun things to do in Grand Rapids, Michigan. This center sits on a massive property of ponds, streams, fields, and wooded areas. Moreover, it focuses on promoting stewardship by educating natural and environmental systems. Plus, it also operates as a wildlife rescue caring for injured wildlife; some have even become permanent residents after being injured and couldn’t survive in the wild. These animals are called “wildlife ambassadors” and participate in presentations to educate the public.

Furthermore, it also offers many programs for both kids and adults that allow up-close interactions with wildlife and nature. The best feature on the property is the Blandford Farm, which features community gardens and also offers kids a chance to learn about sustainable agriculture and farming. Children can even meet the resident chickens, sheep, and goats and even collect fresh eggs.

Imagine indulging in a unique tour in Grand Rapids that involves biking, eating, and drinking – that’s the Great Lakes Pub Cruiser for you! This bike, which can accommodate 15 people, allows you to pedal between different food points of interest in Grand Rapids. You can choose from many different tours that last anywhere from 2-3 hours. What’s more, it takes just about 20 minutes to get from one amazing pub to another, and some tours are more challenging as they have more difficult routes than others. You’ll also get to see some interesting historical sites as you go about Grand Rapids as you go on your adventure.

The iconic sculpture of La Grande Vitesse is one of the most fun things to do in Grand Rapids, Michigan. The name of the sculpture, which sits in Calder Plaza and was created by iconic sculptor Alexander Calder, literally translates to “the great swiftness” in French. It was commissioned as the first National Endowment for the Arts-funded public artwork. What’s more, it was built way back in 1969 from painted steel commissioned as the first National Endowment for the Arts-funded public artwork. It was created in 1969 from painted steel and played a huge role in renewing interest in Grand Rapids. If you’re an art aficionado, then you should go to Calder Plaza to just see this sculpture! In fact, the plaza has been the centerpiece for many performances and festivals. The best bit? The bright red color can easily be seen from a great distance!

Get Some Culture in Grand Rapids, Michigan