10 Amazing Artificial Islands Of The World 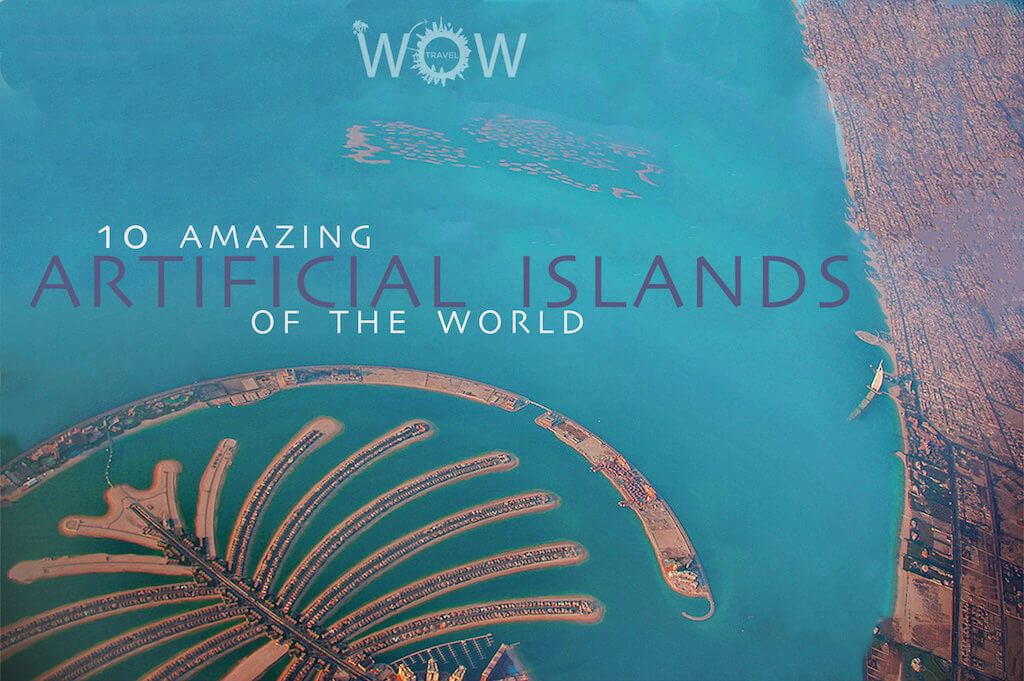 People have always imagined islands as paradisiac places, far from civilization, where people sit in front of turquoise-colored water and drink coconut water while cool sea breeze refreshes hit your face. Nowadays, islands are more than that. Men have created their own islands where they build empires, cities, multi-million dollar skyscrapers, luxurious hotels, floating airports and more. Dubai is a great example, it has bagged two spots (The Palm Jumeirah and The World Islands) on our list of the 10 Amazing Artificial Islands Of The World.

Covering 400 hectares of reclaimed land, The Pearl is a man-made island development, located in Doha, Qatar. The project has residential accommodation, amazing hotels, a marina, and retail areas. Here one can enjoy shopping in the many high-end retail shops and go and walk along the beautiful boardwalk overlooking the marina filled with a variety of international cafes and restaurants.

Located at approximately 4,000 meters (13,122 feet) above sea level in the Titicaca Lake just off the city of Puno. The Uros people, who co-existed with the Incan civilization, have always led a very simple lifestyle and yet they outlived the glorious Incas. The floating islands were created for protection, as they could be easily navigated. They are made from reed, that grow in Titicaca, and are inhabited by 2000 people.

Île aux Cygnes is a small man-made island that was developed in 1827 in order to protect the port of Grenelle. It is only 850 meters (2,789 feet) long, and 11 meters (36 feet) wide. It is also the location of Paris’s version of New York City’s Statue of Liberty.

The Donauinsel (Danube Island) is a long, narrow island in central Vienna, lying between the Danube river and the parallel excavated channel Neue Donau (“New Danube”). The island is 21.1 km (13.1 miles) in length but is only 70–120 meters (230–394 ft) broad. Danube Island is home to clubs, bars, restaurants and a popular music festival and it is not only the favorite recreational region of the Viennese but also an unforgettable experience for tourists. Planning to visit? Make sure to stay at one of the 11 Best Hotels in Vienna.

Durrat Al Bahrain, photographed from the International Space Station. Set at the southern end of Bahrain Island, it is a complex of 14 artificial islands designed for residential living and tourism with luxury hotels and shopping malls.

Peberholm is an artificial island in the Danish part of the Öresund strait. It was created as part of the Øresund Bridge connecting Copenhagen (Denmark) with Malmo (Sweden). The island is small yet very beautiful and only biologists are allowed annually here for preserving its ecological beauty.

The Venetian Islands are part of the man-made islands that comprise Miami Beach. These six islands are Biscayne, San Marco, Di Lido, San Marino, Belle Isle and Rivo Alto. The islands are transected by the Venetian Causeway, which is a private toll road that provides access to Downtown Miami, the Biscayne Corridor, and major highways. Each of the six Venetian Islands contains both waterfront and dry lot homes, in an array of different architectural styles. From traditional to modern, each home is stunningly appointed and on generous lots. The neighborhood closest to the islands offers a Fresh Market, award-winning fine dining, and boutiques that are within minutes from all the islands, and even walking distance from the closest island, Rivo Alto. Source: thejills

Thilafushi, located just a few miles west of the Maldivian capital of Malé, is a far cry from the white beaches and turquoise waters that surround it. Once a pristine lagoon, the artificial island now serves as a dumping ground for one of the most exclusive tourist destinations in the world. Hundreds of tons of solid waste and toxic material from Malé and luxury hotels on nearby islands are unloaded on Thilafushi every day. The amount of waste continues to grow as more and more tourists flock to the islands. Source: businessinsider

The World Islands in the Persian Gulf is an artificial archipelago of various small islands constructed in the rough shape of a world map. They are composed of sand which is dredged from the shallow coastal waters of Dubai. It was originally conceived by the ruler of Dubai, Sheikh Mohammed bin Rashid Al Maktoum.

Palm Jumeirah is the world’s largest man-made island and is comprised of a two-kilometre long trunk, a crown made up of 17 fronds and a surrounding crescent. Following a number of years of feasibility studies, the Palm Jumeirah was launched in 2001, with reclamation starting in the same year. From the end of 2006, the island’s first residences – comprising 4,000 luxury villas and apartments were handed over during a phased period. Since then, the tourism, leisure and retail elements of the island have been developed, creating a spectacular, world-renowned residential and tourism destination.