15 Most Inspiring TED Talks On Travel 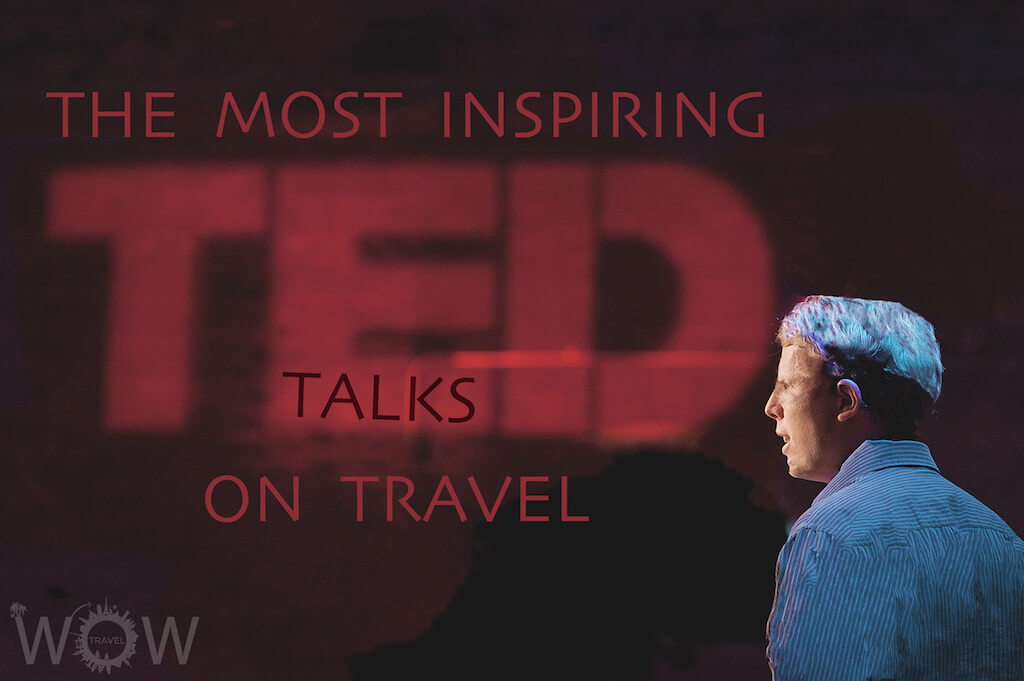 TED is a nonprofit devoted to spreading ideas, usually in the form of short, powerful talks (18 minutes or less). TED began in 1984 and today covers all topics, from science to business to global issues, in more than 100 languages. TED is a global community, welcoming people from every discipline and culture who seek a deeper understanding of the world. They believe passionately in the power of ideas to change attitudes, lives and, ultimately, the world. The ’15 Most Inspiring TED Talks On Travel’ serves as amazing food for thought for all.

Andrew Evans the “Digital Nomad” tells the story of his incredible overland journey from Washington DC to South America as he tried to reach his dream land Antarctica. Through many dangers and uncertainty, he experienced the true essence of traveling, exploring and discovery – something that he could never manage if he would travel efficiently as a tourist. His recipe to relive freedom and wonder is: travel more, plan less!.

Pico Iyer: Where is Home?

More and more people worldwide are living in countries not considered their own. Writer Pico Iyer — who himself has three or four “origins” — meditates on the meaning of home, the joy of traveling and the serenity of standing still.

Colin Wright is a 25-year-old serial entrepreneur, minimalist, and blogger who moves to a new country every 4 months based on the votes of his readers. While travelling, Colin starts up new business endeavours, manages his existing projects, and engages in extreme lifestyle experiments—from not wearing black for half a year to going completely paperless—in order to gain new perspective and to inspire others to make positive changes to their lives that might otherwise seem impossible. Colin writes about entrepreneurship, minimalism, and long-term travel at ExileLifestyle.com. “I wish that the knowledge that humanity has amassed could be evenly and universally available to everyone on the planet, allowing more people to have access to the resources that will allow them to contribute to the global conversation, take care of themselves (and others), and pursue further innovation”.

Roz Savage: Why I’m Rowing Across the Pacific

Five years ago, Roz Savage quit her high-powered London job to become an ocean rower. She’s crossed the Atlantic solo, and just started the third leg of a Pacific solo row, the first for a woman. Why does she do it? Hear her reasons, both deeply personal and urgently activist.

Rick Steves: The Value of Travel

After spending 4 months a year for the last 30 years living out of a suitcase, Rick Steves reflects on the value of thoughtful travel. Sharing lessons learned from Iran to El Salvador and from India to Denmark, Steves tells why spending all that time and money away from home has broadened his perspective, enriched his life, and made it clear to him, as he says in his talk, “Fear is for people who don’t get out very much”.

Tony Wheeler created Lonely Planet after travelling Asia’s ‘hippie trail’ in the early 1970s. Today, after 100 million books, offices on three continents and everything digital from phone apps to websites, inflight infotainment systems to ebooks, the business has moved on to new owners, giving Tony even more time to venture down roads less travelled. Post LP his activities have included the Planet Wheeler Foundation which supports educational and health projects in the developing world and the Wheeler Centre for Books, Writing & Ideas in Melbourne. Travel to the world’s more ‘edgy’ locales has always fascinated me. I want to get my audience to think about what this means through my stories from travelling along George W Bush’s ‘Axis of Evil’ for Bad Lands and the lessons I’ve been learning from my recent Dark Lands travels.

Robin Esrock‘s success as a global adventurer, travel writer, TV producer and international TV personality was no accident, although it did start with one. Struck down on his bike at a Vancouver intersection, Robin hobbled away with a broken kneecap, and one year later, a modest $20,000 insurance settlement. It was just enough for him pack up his things, quit his job, and set off on a one-year solo round-the-world backpacking adventure to 24 countries. He named his journey Modern Gonzo, and committed to record his year of living dangerously, with online weekly reports, photography, videos, and interviews with every person he met. In doing so, he pioneered a new era of multi-platform, switched-on and wired-in travel journalism, leading to adventures beyond his wildest dreams.

Judith Fein: Deep Travel: Connecting on the Road and in Life –

Judith Fein is an award-winning travel journalist who has contributed to more than 100 publications. She is an acclaimed speaker and workshop leader, and is also the author of “LIFE IS A TRIP: The Transformative Magic of Travel” and the new “THE SPOON FROM MINKOWITZ: A Bittersweet Roots Journey to Ancestral Lands.” She is the Executive Editor and co-founder of the popular and much-respected group travel blog: YourLifeIsATrip

Kitra Cahana: A Glimpse of Life on the Road

As a young girl, photojournalist and TED Fellow Kitra Cahana dreamed about running away from home to live freely on the road. Now as an adult and self-proclaimed vagabond, she follows modern nomads into their homes — boxcars, bus stops, parking lots, rest stop bathrooms — giving a glimpse into a culture on the margins.

Francis Tapon: How and Why Travel Transforms You

Travel author Francis Tapon shares some of his traveling adventures, which include walking across America four times and spending three years visiting all 25 Eastern European countries. He discusses how travel can be a catalyst for transforming your life, giving you insights that are hard or impossible to achieve through other means. He also shares a personal story about his father, who motivated him to keep pursuing his dream of visiting every country in the world.

Robert Neuwirth, author of “Shadow Cities,” finds the world’s squatter sites — where a billion people now make their homes — to be thriving centers of ingenuity and innovation. He takes us on a tour..

Sally Webster believes emphat­i­cally that the edu­cated tourist is a respect­ful tourist and that chil­dren want to learn about things dif­fer­ent to their own expe­ri­ences and absorb other cultures. Sally talks about her own passion for travel, her writing, and how she believes we can engage young people in the cultures and places they travel to.

Ms. Bose is a corporate lawyer turned travel enthusiast. Unable to envision herself wasting her life at a desk job, she took to travelling to some of the most exotic places around the world, and gradually turned into a full time travel writer and researcher. She has written for prestigious publications like Outlook Traveler, Hindustan Times and websites like Makemytrip.com. Piya Bose started Girls~on~the~Go with the objective of creating a platform where adventurous women could join in to check out a new destination and also be themselves. ‘Girls on the Go’ (GOTG) Club, a travel company specializing in tours for women, believes in helping women travel to new, exotic destinations.

Abbas Nazari A Journey From Afghanistan

Ten years ago, then 7-year-old Abbas Nazari and his family fled Afghanistan and the Taliban for the hope of a better future in Australia. In this emotional talk, Abbas shares the incredible tale of risk and courage that ultimately led them to New Zealand.