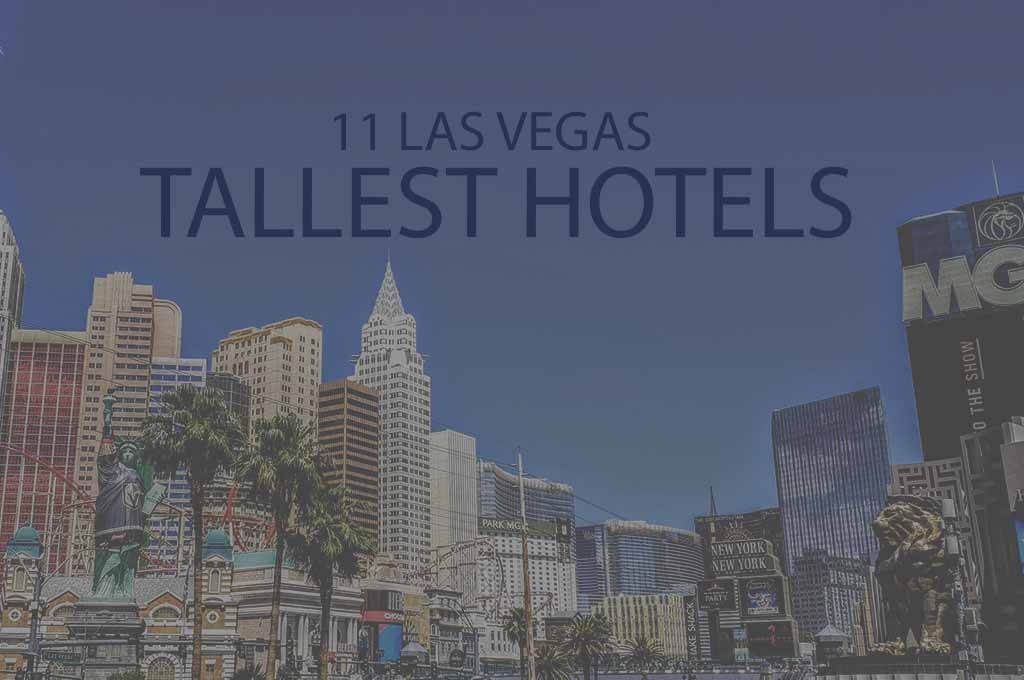 In the middle of the greater Mojave Desert sits the shimmering city of Las Vegas. Its impressive skyline strikingly contrasts with the barrenness of the surrounding desert, and it’s easy to see why. For, Las Vegas’ skyline has a slew of impressive skyscrapers that range from the High Roller to replicas of world wonders, such as the Eiffel Tower. Clearly, it’s easy to be impressed by simply looking skyward at Sin City’s skyline, filled with swanky hotel towers, each taller than the other. In fact, the title for Las vegas’ tallest hotel tower has been passed around quite a few times since Vegas was incorporated in 1911. Since then, the city has been an architectural playground for postmodern designs, thus resulting in an ever-evolving skyline. And with every new project, the developers strive to become one of Vegas’ tallest hotels!

Completing the trifecta at the City Center complex is Waldorf Astoria, one of Las Vegas’ tallest hotel tower options. The 47-storied luxury condo-hotel, formerly the Mandarin Oriental, is decked out in Eastern style elements and is 560 feet (171 meters) tall. It’s unique in layout, as its lobby lies on the 23rd floor of the building. Thereon, you’ll find close to 400 rooms and suites and 225 condo residences that cost up to a whopping 8 million USD! The eighth-floor pool deck is one of the classiest in all of Vegas, making it one of Vegas’ best hotel pools. If that wasn’t enough, this Waldorf outpost has a AAA Five-Diamond Award and even three Forbes Five Star Awards (for its restaurant, spa, and hotel). It’s a distinction that currently only six hotels in the United States have earned.

The 57-storied Vdara condo-hotel and spa in the CityCenter complex stands tall at 570 feet (176 meters) and is amongst Las Vegas’ tallest hotel tower options. This hotel, which has been welcoming travelers since 2009, offers 1,495 suites and is unarguably one of the biggest hotels in the world. It also holds a bar, a market, a fitness center, a salon, and a massive two-storied spa in its folds. In fact, the amazing spa even makes it one of Las Vegas’ best spa hotels. However, its crown jewel is the 40,000 sq. feet huge pool and deck area. Interestingly, the hotel’s concave design and reflective surfaces act as parabolic reflectors, which caused temperatures to be on the higher side at the pool deck! The management covered the glass exterior with a non-reflective film and installed large blue umbrellas over the pool deck to tackle this.

Vdara is one of the few Strip hotels that doesn’t have casino space and one of the two non-smoking and non-gaming of the City Center’s hotels (the other being the Waldorf Astoria). If that wasn’t enough, Vdara got its first AAA Four Diamond Award in 2011.

The 46-storied Hilton Grand Vacations Club Elara Center Strip Las Vegas is a 600-feet-tall timeshare and hotel. This resort has changed a lot of hands and names before becoming a Hilton timeshare property. It was the PH Towers for a long time, but the property began way back in 1941 as the El Rancho Vegas hotel and casino. In 2001, Hilton built the timeshare, making it one of the largest vacation projects in the world. In fact, this property is Hilton’s third timeshare property in Sin City. Rooms here boast floor-to-ceiling windows with superb Strip views, but the lobby bar and the turquoise-hued pool deck area take the cake. The best bit? The hotel is connected to the Miracle Mile shops, making it a fabulous base for shopaholics.

The 49-floor Aria Resort and Casino sits right opposite the Vdara, is 600 feet (183 meters), and is part of the City Center complex. In fact, it’s the City Center’s largest and tallest structure! The luxury resort and casino features two curved glass and steel towers joint at the center, making for a unique architectural style. One of the most unique features of this tall hotel is the inclusion of technology for reducing energy consumption. In fact, it’s the world’s largest hotel to possess a LEED Gold certification. So, you’ll find more than 4,000 smart rooms where the temperature is regulated when one enters or leaves the room. What’s more, unused electronics and lights are turned off, and curtains are automatically adjusted. That’s why Popular Mechanics called it “the most technologically advanced hotel ever built.”

The five-diamond AAA hotel also houses a massive casino, 10 nightclubs and bars, and 16 restaurants. Its pool area is equally huge with 34 cabanas, as is the decadent salon and spa. Plus, it boasts a 1,800-seat theater that hosted Zarkana by Cirque du Soleil until it closed in April 2016.

The luxury resort hotel and casino Cosmopolitan of Las Vegas (a.k.a The Cosmo or just Cosmopolitan) stands tall at 610 feet (184 meters). Located just south of the Bellagio, the hotel comprises two highrises, which are 610 feet tall. If you choose to stay here, you have the choice of more than 3,000 rooms, many of which come with their private terrace. Downstairs, you’ll find a 3,200-seat theater, massive wellness, fitness, and spa facility, and thousands square feet of restaurant and retail space. Gogobot rated the Cosmo the “Best Hotel in the World” in 2013, while CN Traveller’s Gold List rated it one of the “Top Hotels in the World.”

Las Vegas’ tallest hotel tower might also be the epitome of decadence. For instance, it has three different kinds of pools, namely the day club pool, the nightclub pool, and the relaxing pool. Moreover, the Marquee Nightclub & Dayclub on the property was the country’s top-grossing nightclub in 2012. Plus, its “Chandelier Bar” features more than two million crystal beads. Oof! It’s no wonder that it’s also one of Las Vegas’ most expensive hotels.

The 45-storied luxury resort and casino Wynn Las Vegas is the flagship property of Wynn Resorts. It stands tall at 614 feet (187 meters) and holds within its folds 2,716 rooms. Even entry-level rooms measure 640 sq. feet, making them one of the most spacious entry-level rooms on the Strip. What’s more, the complex also has a casino that’s more than 110,000 sq. feet in size. This is aside from the equally massive retail and convention spaces. Wynn Las Vegas also has five-star ratings in every category, spa, restaurant, and hotel, making Forbes Award history. What’s more, it has won the hotel sector award every year since 2007. If that wasn’t enough, it is also a Zagat Survey Top U.S. Hotel and a Forbes five-star, Mobil five-star, and AAA five-diamond hotel.

But that’s not all. Its restaurant Wing Lei also has a Michelin star, making it one of the finest hotels in the world. Along with the adjacent Encore, the entire resort complex has more than 4,700 rooms, making it the seventh-largest hotel in the world.

The 64-storied Trump International Hotel Las Vegas is Las Vegas’ tallest hotel tower, standing tall at 622 feet (190 meters). The structure is a timeshare, condominium, and hotel rolled into one and has residential and non-residential hotel condos. So, it’s also the tallest residential building in Sin City. The hotel is especially famed for its exterior glass, infused with gold. If you stay here, you have the choice of almost 1,300 rooms, of which 300 belong to the hotel’s timeshare division. It has two restaurants, the snazzy poolside restaurant H2(eau) and the flagship full-service restaurant DJT, named after the developer’s initials. Although the developers planned a second tower, they scrapped the plan during the mid-2000s recession. Finally, the hotel is not just tall but also amongst Vegas’ best family hotels and the best Vegas business hotels too.

The luxury resort, casino, and hotel Encore Las Vegas is 631 feet (192 meters) tall and sits with its connecting sister resort Wynn Las Vegas. Together, they hold more Forbes Travel Guide Five-Star awards than any other casino and resort in the world! In fact, the Encore was the world’s second-largest FTG Five-Star resort in 2020, with Wynn winning the top spot. What’s more, Encore has been getting a AAA Five Diamond Award every year since it opened, with the Spa and Tower Suites receiving the Forbes Travel Guide five-star award. It’s no surprise that it’s one of Vegas’ best hotels.

The resort has huge casino and retail spaces, a spa and salon, two bars, four restaurants, and even a nightclub and a beach club. Furthermore, the 63-storied hotel has just 49 floors since they omitted floor numbers 2, 3, 4, 13, and 40–49. While 13 has traditionally been the unlucky number, many East Asian cultures are superstitious about 4 since it’s a homonym for “death” in many languages.

The Palazzo at The Venetian Resort

At 642 feet (196 meters), the Palazzo at The Venetian Resort is Las Vegas’ tallest hotel tower. Not just that, but it’s also the tallest completed building in all of Nevada. The casino and luxury hotel resort brings Italian Renaissance ambiance to the Las Vegas Strip. The all-suite hotel also boasts the largest standard accommodations on the Strip, with every room measuring a whopping 720 square feet. That’s what makes this hotel complex the second-largest hotel in the world! In 2009, the first year of its eligibility, the Palazzo was awarded the AAA Five Diamond Award and has been awarded the honor every year since. The Lamborghini Dealership and the Shoppes at the Palazzo are two prime attractions at this resort.

The resort, mall, and casino of Resorts World Las Vegas stands tall at 679 feet (206 meters) and is the tallest building constructed in Vegas in the 2010s. The 59-storied tower houses a massive casino and three Hilton hotels; the Crockfords, Conrad, and Las Vegas Hilton, one of Las Vegas’ best hotels with private pools. In fact, it cost 4.3 billion USD to build, making it Vegas’ most expensive resort property ever developed. Aside from its height, the hotel has almost 1,500 modern rooms, a hedonistic spa, a casino, and restaurants. Furthermore, it has the largest pool complex on the Las Vegas Strip. It’s no surprise that this Asian-themed resort and casino set a bunch of records when it first opened!

The Strat Hotel, Casino and SkyPod

The Strat Hotel, Casino, and SkyPod is the absolute Las Vegas’ tallest hotel tower. It’s famous for its 1,149 feet-tall (350 meters) observation tower, the tallest one in all of the United States. What’s more, it’s the second-tallest tower in the Western Hemisphere, surpassed only by Toronto’s CN Tower, which has one of the world’s best skywalks and viewing platforms. Furthermore, the tower is topped by a pod home to observation decks, lounges, and a revolving restaurant. Plus, the top of the tower also has several thrilling rides. The casino and the hotel lie at the base of the tower, and the resort even has a shopping mall and a showroom.

The hotel is the brainchild of Robert Edward Stupak, whose idea was for the tower to become a local landmark, like what the Space Needle is for Seattle or what the Eiffel Tower did for Paris. After a series of issues that included everything from breaking local laws to bankruptcy, the hotel was reborn as the SkyPod in early 2020. Did you know that there’s also a wedding chapel at the top of the tower? Yep.