11 Largest Ferris Wheels In The World 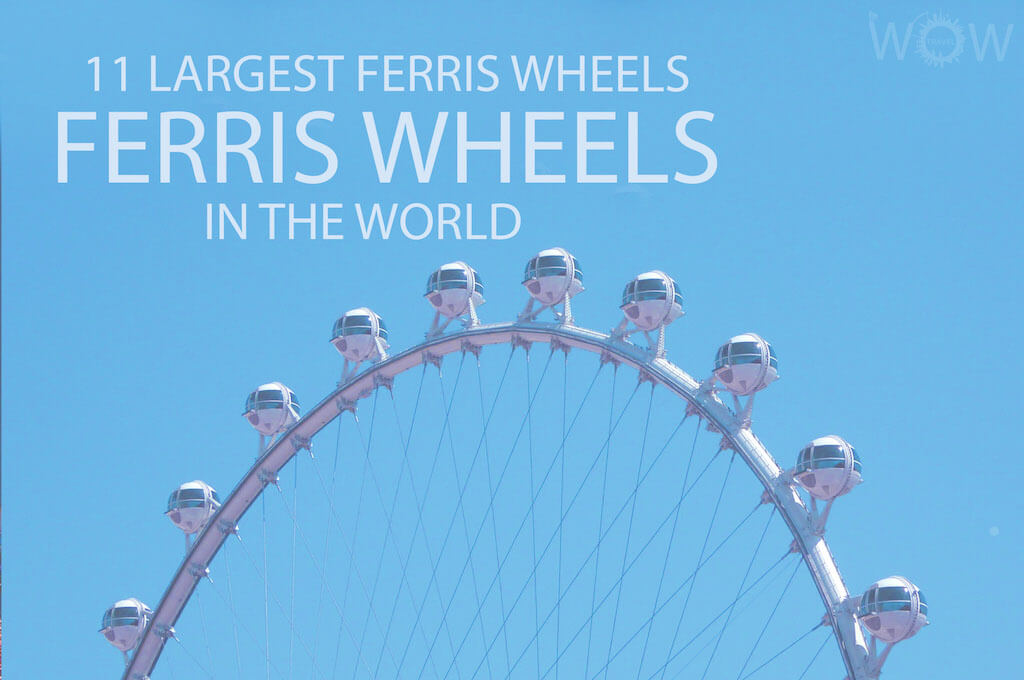 The world saw its first Ferris wheel in 1893 when George W. Ferris constructed it for the World’s Columbian Exposition in Chicago. Intended to rival the Eiffel Tower, the Ferris wheel stood at an imposing 80.4 meters. It soon became a popular recreational activity with its 36 cars. However, the wheel closed in April 1894 a few months after the Exposition ended. Since then many wheels have vied for the position of the largest Ferris wheel in the world, with many giant wheels coming up in different parts of the world.

One of the earliest surviving Ferris wheels is the Wiener Riesenrad in the Leopoldstadt district in Vienna, Austria. Built in 1897 to celebrate Emperor Franz Josef I‘s Golden Jubilee, the wheel was supposed to be demolished in 1916. However, a lack of funds for its removal kept it standing. Today it is one of the most popular attractions in Vienna. The Wiener Riesenrad was the tallest extant wheel in the world until the Technocosmos in Japan knocked it off that pedestal. From its early beginnings at 80 meters the Ferris wheel also referred to as the Observation wheel, has grown considerably. The largest ferris wheel in the world now stands at an astounding 250 meters. Read on to find out which are the largest ferris wheels in the world.

Also known as The Tienstein Eye, this 120-meter tall Ferris wheel soars high above the Yongle Bridge in Tianjin, China. Opened to the public on 7th April 2008, the wheel has since become an important landmark in Tianjin city. It has the distinction of being the only wheel of its kind to be built over a bridge. In fact, commuters on the river and the bridge get a clear view of the people riding the wheel. There are 48 passenger capsules that can carry eight passengers each. A complete rotation takes about 30 minutes.

Located in the Docklands area of Melbourne, Australia, the Melbourne Star rises grandly. At 120 meters, it shares the same height as the Tianjin Ferris Wheel. There are seven spokes on the wheel that are reflective of the seven-pointed star on the Australian flag.

Originally opened in December 2008, two years behind schedule, the giant wheel had to close down 40 days later. Structural defects forced its closure for almost five years. It reopened in December 2013. The only wheel of its kind in the southern hemisphere, this ride also takes 30 minutes to complete and provides an uninterrupted panoramic view up to 40 kilometers.

In terms of height, the Suzhou Ferris Wheel shares the same spot as the previous two, rising to a height of 120 meters. However, despite being the same height, the rotation is shorter at 20 minutes for a complete rotation. This is probably because it has more passenger cabins, with 60 in total. Completed in 2009 on the east bank of the Jinji Lake in Suzhou, this Ferris wheel is one of four 120m wheels of its kind in China.

The Wheel at ICON Park in Orlando, Florida has gone through several name changes before settling on this new name in 2019. This 122-meter tall giant wheel is described as an ‘observation wheel’ rather than a Ferris wheel. However, technically they’re one more or less the same thing. What sets this one apart is that it’s the first observation wheel to feature a ski lift capsule design.

Initially slated to open in the summer of 2014, several delays resulted in the ‘Orlando Eye’ finally opening in May 2015. However, a few months after its opening a technical fault left 66 riders stranded for about three hours. A change of ownership in 2016, resulted in a new name with more interesting capsules added to the ride.

Rotating at a height of 123 meters, the Redhorse Osaka wheel in Osaka, Japan was once the fifth-largest Ferris wheel in the world. It has since fallen two slots after the creation of larger giant wheels. The Redhorse has transparent gondolas that allow you a great view of the city. They even have glass floors, but if you’re squeamish about that part you could always borrow a foot mat.

All the gondolas on the ride have wide seats, air conditioning, and heating. You’ll also find two VIP gondolas with extra facilities. The ride, however, is much shorter than others, taking about 18 minutes.

Opened in 2017, the Sky Dream in Taichung city in Taiwan stands at 126 meters. Located in LIPHAO Discovery Land, the Ferris wheel attracts a large number of visitors. The parts for the giant wheel were shipped from Japan and took 13 trips. It has a total of 60 passenger cars which can hold 8 people each. It takes 25 minutes for a complete revolution.

One of London‘s iconic landmarks and the most popular paid tourist attraction is the London Eye or the Millennium Wheel. Standing at 135 meters with a diameter of 120 meters, it is undoubtedly one of the largest Ferris wheels in the world. It was the tallest Ferris wheel in the world when it opened in 2000 but was subsequently surpassed by larger wheels. However, its operators still tout it as the ‘world’s tallest cantilevered observation wheel.’

The London Eye was not meant as a permanent attraction when it opened. It was only meant to be around for five years but the operators later submitted an application for permanent status which was granted by the council. There are 32 ovoidal passenger capsules in total which are numbered from 1 to 33. The number 13 has been omitted for superstitious reasons. Each air-conditioned capsule holds up to 25 people. The wheel completes one revolution in 30 minutes. Although it does not stop to take on passengers, the rotation is slow enough for passengers at ground level to move on or off. In March 2020, the operators announced that the Eye would be bathed in blue every Thursday to support the NHS during the coronavirus outbreak.

The Star of Nanchang in Jiangxi, China was once the tallest Ferris wheel in the world. However, it was later upstaged by the Singapore Flyer in 2008. Opened in May 2006, the giant wheel revolves at a height of 160 meters. It has a maximum carry capacity of 480 passengers with 60 enclosed air-conditioned gondolas. Similar to the London Eye, the Star of Nanchang takes about 30 minutes for a single rotation. Here too the slow rotation allows passengers to embark or disembark without the wheel stopping.

With a height of 167.6 meters and a diameter of 158.5 meters, the High Roller at Las Vegas, United States is the second-largest Ferris wheel in the world. The wheel welcomed its first passengers in March 2014. Although the initial plans of the wheel were for 32 passenger cabins, it features 28 cabins that can accommodate 40 persons each. The wheel rotates on a pair of custom-designed spherical bearings. Offering sweeping 360-degree views of The Strip and Las Vegas Valley, the 30-minute ride is quite breathtaking. Quite predictably, the High Roller is a popular venue for events, even weddings!

Even though Ain Dubai the largest Ferris wheel in the world, it hasn’t opened to the public yet. It is slated for a 2020 opening during the Dubai Expo. Standing at a whopping 250 meters on Bluewaters Island, the Dubai Eye dominates all the other wheels of its kind. The base of the structure will serve as an entertainment zone whilst 48 capsules will provide extensive views of the Dubai Marina and other landmarks.