11 Most Luxurious Hotels In The World 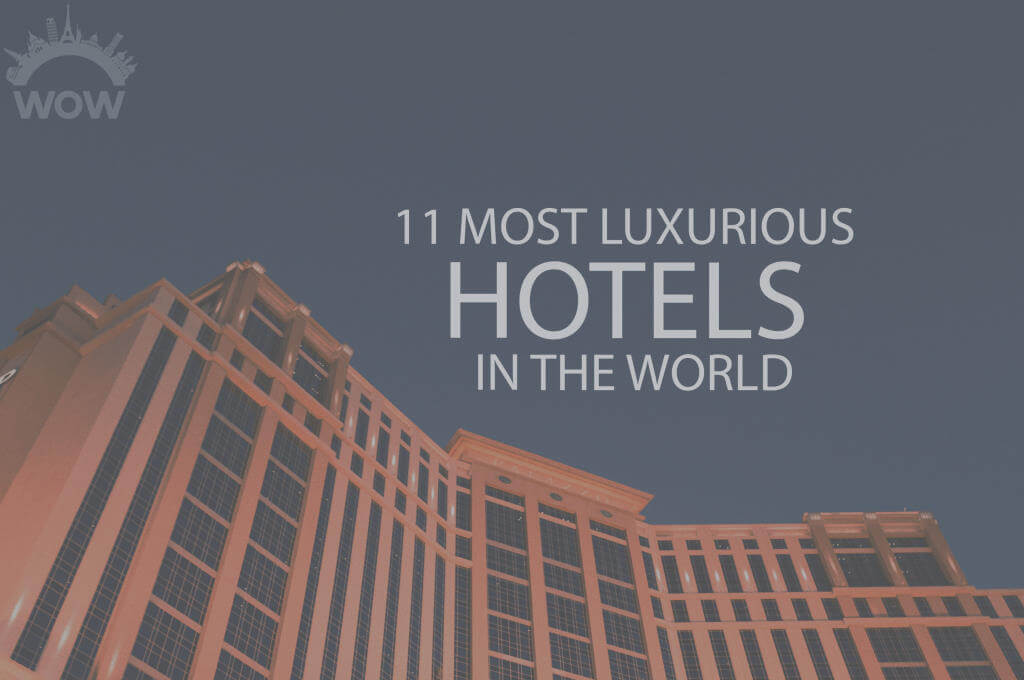 Luxury can be defined as the state of extravagant living and great comfort. What’s more, luxury comes in all sizes and shapes and can be experienced all over the world. But, nothing says ‘luxury’ better than hotels, and lavishness at that. The most luxurious hotel in the world options range from Vegas to Morocco and boast incredible amenities and perks. From private pools overlooking the ocean to butler services for drawing you luxuriant baths, these places have them all. If you’re traveling on a once-in-a-lifetime holiday to a once-in-a-lifetime location, then luxurious hotels are the place to hole up. So, pack your designer luggage for a life of caviar and champagne and check out 11 of the most luxurious hotels in the world.

The most luxurious hotel in the world is also one of the Best Hotels in Doha, the Mandarin Oriental. Down near Souq Waqif and the Corniche, the lavish hotel blends sophisticated design and rich Qatari heritage. For instance, sand dune patterns appear just about everywhere; light fixtures, textiles, carpets, you name it. Moreover, door handles are designed to resemble oryx horns, and windows are shaded with traditional mashrabiya lattices. This Doha hotel is also a hotspot and a see-and-be-seen place in the city, especially the rooftop pools. The dreamy white poolside cabanas are the perfect place to lounge while sipping cocktails and feasting your eyes on mesmerizing views of Doha.

Sprawled on lush green acres on the western banks of Lake Pichola in Udaipur is Oberoi Udaivilas, the mothership of all Oberois in the world. It seems to float on the lake, making it one of the Coolest Floating Hotels Around The World. What’s more, it also happens to be one of the World’s Most Unusual Hotels. The magnificent 18th-century palace hotel showcases the best craftsmanship of the Rajput era. Think delicate miniatures handpainted on walls, glittering thikri mosaics, and marble-carved lotus ponds. However, one of the standouts on the property is the jaw-dropping “Candle Room,” which has a dome with thousands of mirrored glass pieces.

The grandeur is overwhelming and could come off as cold, but not here. Think floating mansions, door attendants with great twirling mustaches greeting you warmly, and small, personal touches such as beaded bags or metal-wrought tea lights. In a city as romantic as Udaipur, the Udaivilas is one of the most romantic places to stay.

Few hotels embody their destinations as spectacularly as La Mamounia. The opulent hotel lies in a 12th-century estate in the heart of Marrakech, complete with fountains, landscaped gardens, and palm trees. Everywhere you look, you’ll see sultry spaces draped in dark velvets and silks, which are a constant reminder that you’re in Morocco! One of its most stunning features is the hammam, a mosaic of pine-green, red, and blue tiles, where clay body wraps are the order of the day. The utterly enormous pool comes in a close second, complete with bow-tie service all day long. However, it’s the bedrooms that’ll steal your heart, with gold-framed bathroom mirrors and Moorish arches and curves on the balcony doors.

The Titanic Mardan Palace is an all-inclusive luxury on the shores of the Mediterranean. The luxury hotel lies in Lara, Turkey, and is famously Europe’s most expensive luxury resort! Get this; a 12,000 square-foot-huge spa, four aquariums, and a massive pool. The cherry on top? There’s even a personal beach with sand that’s been imported from Egypt! The hotel’s one-of-a-kind architectural design pays homage to four of the most iconic landmarks in Istanbul, which is led by the massive Dolmabahçe Lobby. With its majestic staircase and five-story glass ceiling, it is reminiscent of a lavish modern-day palace. With a slew of entertainment and watersports activities, a championship golf course, and more than 30 dining options, this sprawling Turkish estate is a stay for the ages.

When it comes to the most luxurious hotel in the world, there’s no list that won’t find the Emirates Palace on it. Located in the heart of Abu Dhabi, this lavish, golden-hued hotel was designed for royalty and overlooks the sparkling waters of the Arabian Gulf. In fact, it’s one of the most decadent stays in all of the Middle East and boasts a pristine, white-sand private beach and even a private marina. The place is the pinnacle of indulgence with an array of worldwide cuisines and coral rooms with views of the gardens and the lush emirate. If you’re still not impressed (we’re sure you are!), get this; the hotel also has a bevy of fountains and pools, two heavenly spas, and more than 1,000 Swarovski crystal chandeliers!

Want to live as Roman emperors did? The 1906-built Westin Excelsior in Rome is where you should be. This one is not just a luxury hotel; it’s a prized and beloved historical landmark too. With bohemian chandeliers, Empire-style furniture, and swimming pools styled after Pompeian baths, the hotel is the ultimate symbol for Italian opulence. Even if you aren’t staying here, don’t miss dining at the lounge bar Café Doney. You’ll find yourself being serenaded by opera singers as you tuck into your Sunday brunch. If you’re staying here, then the piece de resistance is the absolutely stunning Villa La Cupola Suite. This signature luxury cocoon lies across two full floors, making it the largest suite in all of Italy!

Ever since it debuted in 1907, the Plaza Hotel has been symbolic of and synonymous with opulence and lavishness in New York City. Not only is it the most luxurious hotel in New York City, but it’s also one of the Most Romantic Hotels in NYC. It’s also one of the Best Hotels in Midtown, NYC, where it lies surrounded by the very best dining and, attractions, and entertainment that the city has to offer. For more than a century, this luxurious New York City hotel has welcomed distinguished guests from all over the world, including world leaders, dignitaries, and the who’s-who of Hollywood. Sparkling chandeliers, gilded surfaces and furnishings, and tip-top service; staying at the most luxurious hotel in New York City doesn’t get better than this. Finally, the Plaza was even designated as a National Historic Landmark in 1969.

Paying tribute to the legendary lost city of Atlantis is Atlantis Paradise Island in the Bahamas. In fact, it’s one of the poshest hotels in all of the Caribbean. It lies on Paradise Island, which is one of the Most Colorful Places On Earth! The resort pulls out all the stops when it comes to amenities, which include an 18-hole golf course and a whopping 11 swimming pools. But, that’s not all. The property even boasts 21 restaurants (yes!), a swanky gym, a divine spa, and even a magnificent water park. Want to splurge on a stay here? The 23rd-floor Bridge Suite is as large as 10 plush rooms and comes with a 22-karat gold chandelier, a grand piano, and a permanent staff of attendants and butlers to cater to your every whim. Welcome to paradise, indeed.

The spectacular lobby of the Marquis Los Cabos in Mexico feels like a temple to the wildly restless Pacific Ocean right outside. It’s inspired by a celestial legend of two angels seeking paradise on earth and boasts massive waterfalls and stunning sculptures. The all-inclusive, adults-only property features everything from tranquil infinity pools and a world-class spa to some of the best restaurants in the world. However, the most special bit about this hotel is that besides luxury suites, they also offer private Casitas. These “small homes” are not-so-small and have amenities galore; think rooftop terraces, gardens, and private plunge pools. The icing on the cake is that they lie right by the ocean! So, they ensure unforgettable, once-in-a-lifetime views of Cabo’s breathtaking sunsets.

Coming up next is the most luxurious hotel in Vegas, The Palms, which is one of the most ambitious projects in the city. It lies near the famous Las Vegas Strip, one of the Top Tourist Attractions In The USA. Priding itself on being ‘different in design,’ The Palms is one of the world’s most sought-after luxury destinations. For the same reason, or perhaps the reason for it, it features artwork by greats such as Jean-Michel Basquiat and Andy Warhol in the lobby. If that wasn’t enough, it has a slew of Michelin-star fine-dining restaurants and even a rooftop nightclub, one of the glitziest in Las Vegas. Do all these things about the most luxurious hotel in Vegas don’t impress you enough? They also have a scotch inventory worth three million USD. Take that!

Often touted as the world’s first seven-star hotel, the Burj Al Arab is, without a doubt, the most luxurious hotel in the world. Representing the sail of an Arabian dhow, the outrageously extravagant hotel is also the world’s seventh-tallest! For instance, its rooms and suites have full-sized Hermes amenities, 24-karat gold leaf walls, and a pillow menu with nine types of pillows to choose from. Located on a violin-shaped artificial island off the coast of Dubai, the magnificent destination offers world-class service, right from the rooftop helipad to the chauffeur-driven Rolls Royce service. And if all of that isn’t enough luxury, you get 24-karat gold iPads upon arrival, which include access to hotel information and all guest services. With the world’s highest hotel rating being five-star, this one is billed as a seven-star hotel. Sigh.