13 Longest Bridges In The World 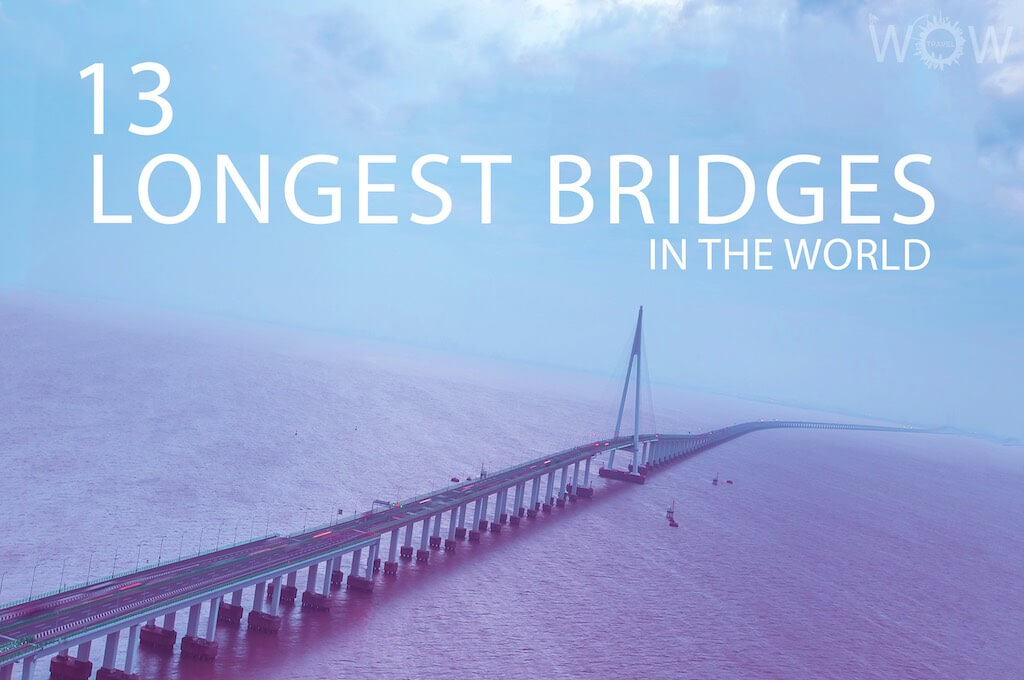 A bridge is mainly built to connect two areas over a body of water or a gorge. But with a little touch of architectural magic, it becomes more than that. In many cities, bridges have become some of the main tourist attractions, whether it’s for beauty or simply its length. That is why we came up with this list of the longest bridges in the world.
If you are into architectural gems, you should definitely consider visiting the countries where these bridges are located. These majestic structures will surely make your Instagram followers jealous! So, take a look at these thirteen bridges and put some of them (if not all) onto your travel bucket list.

Over the Yangtze River, you’ll find a large complex of bridges. It’s the Runyan Bridge, which is a part of the Yangzhou-Liyang Expressway. One of the longest spans covers the southern part and the other the north. In total, the whole complex is 35,660 meters long (116,990 feet).

The construction began in 2000 and finished in 2005. If you think five years is a long time to build a bridge, you will be surprised that this one actually finished ahead of schedule.

Serving two Expressways in China, Hangzhou Bay Bridge crosses over a bay that inspired its name. This stayed-cable bridge spans 35,673 meters long (17,037 feet). If you plan to visit Jiaxing or Ningbo in the Zhejiang province, you should definitely drive across this bridge. The toll fee is only 80 CNY (around 11 USD) per car. It’s definitely worth the driving and sightseeing experience.

While most bridges use concrete piles to support the deck, this bridge uses steel piles. This makes Hangzhou Bay Bridge unique, and also to make it less prone to high tidal forces around the bay area.

Without this elevated toll road , the people of Jakarta would cope with a lot more traffic than they already do. Spanning more than 36 kilometers (119,400 feet), Jakarta-Cikampek Toll Road recently opened in late 2019. Before the existence of this longest bridge in Indonesia, it could take more than two hours just to get out of the city center. You can experience the too bridge by taking this half-day tour with airport transfers.

Jakarta-Cikampek Toll Road consists of nine sections. Each of them connects some of the main regions in and around Jakarta. It starts at the west end in Cikunir and ends in Karawang.

You’re probably familiar with voodoo and ghost stories in New Orleans, Louisiana. But, here’s another side of Louisiana. This magnificent bridge is over 36 kilometers in length (around 120,440 feet), Manchac Swamp Bridge carries Interstate 55 and US Route 51.

Opened in 1979, this may be the oldest longest bridge in the world. The best part, is you get to drive over it for free. Yes, this is a toll-free bridge!

Back in China, this bridge that was specifically built to carry train lines. It spans over 38 kilometers, all the way from Hankou North to Jinghe. Line 1 has been serving passengers since 2004. Previously, there were only four other cities in mainland China with a metro system. Wuhan was the fifth.

Although this bridge carries rapid transit, the locals refer to it as light rail. This has nothing to do with the weight of the train or how many passengers it can carry. The term “light rail” came from the fact that this bridge is elevated, making it appear to float lightly in the air.

Louisiana seems to know what they’re doing when it comes to building long bridges. Spanning over 38 kilometers (126,144 feet), the southbound part of the bridge opened 1956. And then about 13 years later, the northbound side was finally ready. Together, they create what was the longest bridge in the world.

If you search Lake Pontchartrain Causeway, or The Causeway, on Google Maps, you can see its majestic satellite view. It spans from one bank to another in one straight line.

Carrying a high-speed railway, this bridge spans more than 48 kilometers (157,982 feet). Operational since 2010, the railway itself connects two of the biggest cities in China: Beijing and Shanghai.

Even though the railway goes all the way to Shanghai, Beijing Grand Bridge ends in Langfang. From there, the railway continues on another longest bridge in the world which you will also see on this list.

This bridge was a massive project. A lot of names were involved in the building of Bang Na Expressway. Thailand Prime Minister, Sukavich Rangstpol, was behind this project. Louis Berger and Jean M. Muller both engineered and designed the structure.

Bang Na Expressway connects some of the most important regions in Thailand. It spans 54 kilometers. Since 2000, the bridge has been one of Thailand’s most important structures.

When completed in 2008, Weinan Weihe Grand Bridge was the longest bridge in the world. But that title only lasts for a couple of years. Thanks to the megaproject of grand bridge construction in China. More than 10,000 workers built this bridge from concrete and steel.

It carries a high-speed railway connecting Zhengshou and Xi’an. It spans 79,732-meter long (380,200 feet) over Wei River and many others.

Like the Beijing Grand Bridge, this one also carries a high-speed railway connecting Beijing and Shanghai. This bridge is the first one on our list which is longer than 100 kilometers.

To make sure Cangde Grand Bridge is able to withstand earthquakes, they built more than three thousand piers. Like most of the bridges carrying the Beijing-Shanghai railway, Cangde was also finished in 2010.

As you can see, most of these longest bridges in the world are found in China. But Taiwan is right up there for the challenge. This bridge connects Changhua and Kaohsiung via a high-speed railway. Millions and millions of passengers traversed this bridge.

It spans for 157,317 meters or 516,132 feet. And, it crosses over fault lines. However, the bridge was designed to allow trains to stop safely during earthquakes.

There’s only one bridge left to reveal on this list. And the title of the longest bridge in the world goes to Danyang-Kunshan Grand Bridge.

This completes the Beijing-Shanghai railway. This one is over 164 kilometers long (540,700 feet). Together, the four grand bridges span for more than 400 kilometers. When it was finished in 2010, it automatically became the longest bridge in the world. And it is still listed as one in Guinness Book of World Record.

Danyang-Kunshan Grand Bridge is parallel to the Yangtze River. This means you get to enjoy the view of canals and rice paddies while you’re on the bridge. And in one part, it crosses over the Yangcheng Lake for 9 kilometers. That is a sight you should not miss.

So, how about creating a new bucket list with “Getting on a high-speed train from Beijing to Shanghai” in it? Not only you will be on four longest bridges in the world, but you also get to see amazing surrounding views!