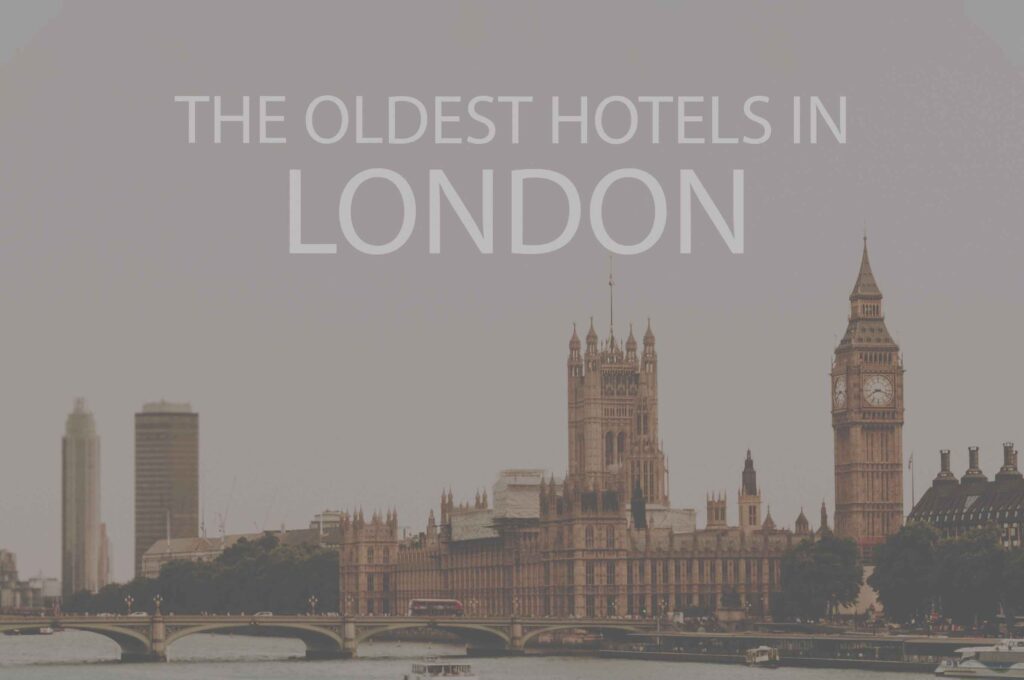 If you wanted to spend your nights in London before the 19th century, your options were to rent a house, check into your gentleman’s club, or get a room at a lodging. But thanks to the industrial revolution and the introduction of the railways, people started visiting London more often. In order to accommodate travelers, many railway companies began to construct hotels close to their stations, which was a good move. The oldest hotel London has to offer was built to impress, and many followed its steps. Unsurprisingly, these exquisite hotels drew royalties and celebrities from the entertainment industry. Here are some of London’s oldest hotels that you should know! Wondering what is the oldest hotel in London? We have the answer too!

The Great Eastern Hotel (now the Andaz London Liverpool Street) was one of many railway hotels in London designed by Edward Middleton Barry. For hundreds of years, the site housed Bethlehem Hospital, which was a psychiatric hospital that gave rise to the word “bedlam.” And when this luxury hotel in London opened in 1884, its main focus was to provide guests with a luxurious experience that couldn’t be found elsewhere. It even brought in seawater by train so that visitors may take salt water baths!

The sumptuous masonic temple that the Freemasons use as a meeting location remains the hotel’s most prominent historical feature. Also known as the “Grecian Temple,” which was found during renovations in the 1990s, is a 1912 structure with a shining gold star pointing in the direction of zodiac signs. Today, the temple is a venue for events.

When it comes to popularity, The Savoy is our top pick. Opened in 1889, many claims this hotel to be Britain’s first “luxury” hotel. The hotel’s image as a glitzy location can be attributed to its founder, Richard D’Oyly Carte a multifaceted man who also served as a theater manager, talent scout, and hotelier. Additionally, he also introduced the famous composer and lyricist pairing Gilbert and Sullivan, who would eventually open the Savoy Theater in 1881. When The Savoy, which was built next to the theater, first operated, it immediately drew a fashionable crowd from the entertainment industry.

Numerous innovations and luxuries were featured throughout the hotel, like free-flowing hot water and hydraulically operated lifts, proving that it’s one of the most luxurious hotels in London. Even The Prince of Wales (later King Edward VII) would regularly dine at this hotel. This oldest hotel London has to offer sure doesn’t disappoint.

The main selling feature of The Clermont Charing Cross, which was originally known as the Charing Cross Hotel, was (and still is) convenience. Set above Charing Cross Rail Station’s main entrance, this oldest hotel London has to offer had enormous social spaces and balconies overlooking the station concourse when it was opened in 1865. It was also the same year the station opened, allowing guests at that time to observe the hubbub as trains arrived and left.

Furthermore, this hotel is also seen by many as the most central hotel in London. That’s because it’s only two minutes from what many consider to be the city’s epicenter, marked by a statue of Charles I riding a horse just south of Trafalgar Square. Today, it’s a popular hotel known for its superb amenities and friendly and multilingual staff.

As you may know, the UK’s railway network expanded massively during the Industrial Revolution. This made the country’s railway companies enormously wealthy and powerful. As a result, numerous businesses made an effort to build hotels close to their stations. As you might imagine, several opulent hotels popped up in London, including the St. Pancras Renaissance Hotel London. Originally called the Midland Grand Hotel, this hotel was opened in 1873 and boasted avant-garde features. The hotel boasted concrete floors, a cutting-edge hydraulic lift, and spinning doors. While no restroom was initially there, each guestroom had its own fireplace.

This historic hotel was unfit to receive visitors by the 1930s as it gradually fell behind the times and many competitors did a better job at accommodating travelers. There were even plans to close the hotel for good in the 20th century. Fortunately, it was reopened in 2011 under the name that we all know today, now with a private bathroom as standard!

What is the oldest hotel in London? Though old, it’s certainly not this one. However, it’s definitely one of the most popular choices! Named after the popular millionaire William Waldorf Astor, The Waldorf Hilton is arguably the most well-known historic hotel London has to offer. The hotel, which was first opened in 1908, quickly rose to the top of London’s most illustrious enterprises list. Exciting dance events were frequently held in the hotel’s Palm Court ballroom. Since then, the hotel, officially referred to as “The Waldorf Hilton, London,” has retained its illustrious reputation.

Conveniently set in the thriving West End, this hotel is surrounded by British culture. It’s also set close to many attractions. This means the top things to do in London are just steps away. It’s placed right in the center of the posh theater district, close to some of the top playhouses and concert venues. Meanwhile, Convent Garden and Oxford Street are where shoppers will congregate to visit the best stores in the entire UK. Moreover, this hotel is surrounded by numerous historical sites fundamental to British histories, like Trafalgar Square, Big Ben, and Buckingham Palace.

We have the Great Northern Hotel, London’s first great railway hotel! When this oldest hotel London has to offer was constructed in 1854, its characteristic curvature was intended to mimic the contours of Pancras Road, where it still stands today. Lewis Cubitt, the hotel’s designer, civil engineer, and architect, is to be credited for the hotel’s outside beauty even though the road no longer curves in the same manner.

During World War II, this hotel was off-limits to the general public and occupied by GNR employees from its King’s Cross office instead. Throughout the years, the Great Northern has been refurbished several times to embody its current high standards. Today, it’s known for its traditional and honest employees. With only 90 rooms spread across its six stories and despite its intimidating frontage, this historic hotel London has to offer is rather modest compared to other hotels in London.

What is the oldest hotel in London? While this may not be the oldest, it does make you feel like you’re back in the 90s. Set in downtown London is St. Ermin’s Hotel, a historic hotel London has to offer that was built on the site of a 15th-century chapel. This property was originally opened as a series of lavish apartments. However, it was then converted into a fancy boutique hotel in 1889. Since then, countless guests have walked through its hallowed doors, including British Prime Minister Winston Churchill.

Nestled within Westminster’s winding streets, this timeless gem is also loved by travelers because of its strategic location. Some of the city’s most popular landmarks, including Buckingham Palace and St. James’ Park, are just a stone’s throw away! Because of that, we think this terrific, gay-friendly hotel in London is a nice starting point to explore London’s prestigious history.

Next is Hilton London Paddington, an engineering masterpiece that opened in 1854. What amazes us and many others is the fact that this hotel only took 14 months to build! Unbelievable, right? And of all of the city’s railway hotels, this hotel was the first to offer direct access to a station. With four London Underground lines set by the front door, this historic hotel London has to offer is easily one of the city’s best-connected hotels. It was known as the Great Western Royal Hotel when it was opened. However, after a refurbishment that ended in 2001, this British gem reopened as the luxurious hotel you know today.

As with many other hotels on this list, this oldest hotel in London houses also has a sad tale. It was said that the second Duke of Buckingham and Chandos, who passed away while staying at this hotel back in 1861, allegedly went bankrupt and owed huge debts of money despite having inherited money from his family. So, what is the oldest hotel in London? While it’s certainly not this one, it for sure is one of the best in London!

Originally named Mivart’s in 1812 and founded by the father of St George Jackson Mivart, this hotel was later sold to the Claridge family in 1854, hence the name. After rebranding itself, Claridge’s managed to gather an enviable reputation among locals and travelers. It was even visited by Queen Victoria in 1860 when she visited Empress Eugenie of France. However, this historic hotel in London houses would then close for a while and go through a substantial redesign. It then reopened in 1898 and soon became a hotspot for the city’s hip partygoers. Its lavish ballroom is a favorite spot among youngsters who want to dance the night away. In 1929, the hotel was redesigned, again, giving itself its distinctive Art Deco features that you can still witness today.

Did you know aside from Queen Victoria, this oldest hotel London has to offer also hosted many other notable guests during World War II? It was the go-to spot for exiled royalty and heads of state, including the Queen of the Netherlands and the kings of Greece. That’s not all, as Crown Prince Alexander II of Yugoslavia was also born here, in suite 212. Today, it’s a five-star hotel that’s ready to welcome everyone, including your furry friends! Speaking of which, check out these best pet-friendly hotels in London!

Designed by John Giles and opened in 1865, The Langham London was the first hotel in London that was purposely built as a grand hotel. When it was opened, it was named the biggest hotel in the city. It boasted fancy facilities like 100 water closets, 36 bathrooms, and the first hydraulic lifts in England. Even this lavish hotel’s opening ceremony was extremely grand, as the Prince of Wales performed it. Apart from that, many legendary icons have also spent the night at this historic hotel London has to offer. They include French Emperor Napoleon III after he was exiled from France, Charles Dickens, and Arthur Conan Doyle.

Moreover, The Langham was also used as a first-aid station during World War II for the British soldiers. Aside from that, it was also used by the BBC for broadcasting wartime. BBC would later purchase the building in 1965. However, because of its location just across the BBC’s headquarters, the hotel also suffered some damage during the global war. A bomb from a German Luftwaffe aircraft managed to hit one of the hotel’s tall towers. Thankfully, today you can stay at this oldest hotel London has to offer without being afraid of anything!

Opened back in 1837, Brown’s Hotel, a Rocco Forte Hotel, is widely known as the oldest hotel London has to offer, answering your question of “what is the oldest hotel in London?”. Made up of 11 fantastic Georgian townhouses, this hotel boasts 117 jaw-dropping guestrooms. But what’s amazing is none of them are designed the same. Despite being so grand, it actually started as a rather small hotel. Later in 1859, a public dining room, which was the first in London, and more guestrooms were added.

It wasn’t until the 1960s that this hotel became a popular destination spot and started to attract countless elite guests. This hotel had the privilege of housing monarchs like Frederick Augustus III, Theodore Roosevelt, and many more. Fun fact: Roosevelt also spent the night at this historic hotel before his honeymoon! Also, it was the site of London’s first telephone call. It was made in 1876 by none other than Alexander Graham Bell.

Recommended Things To Do in London