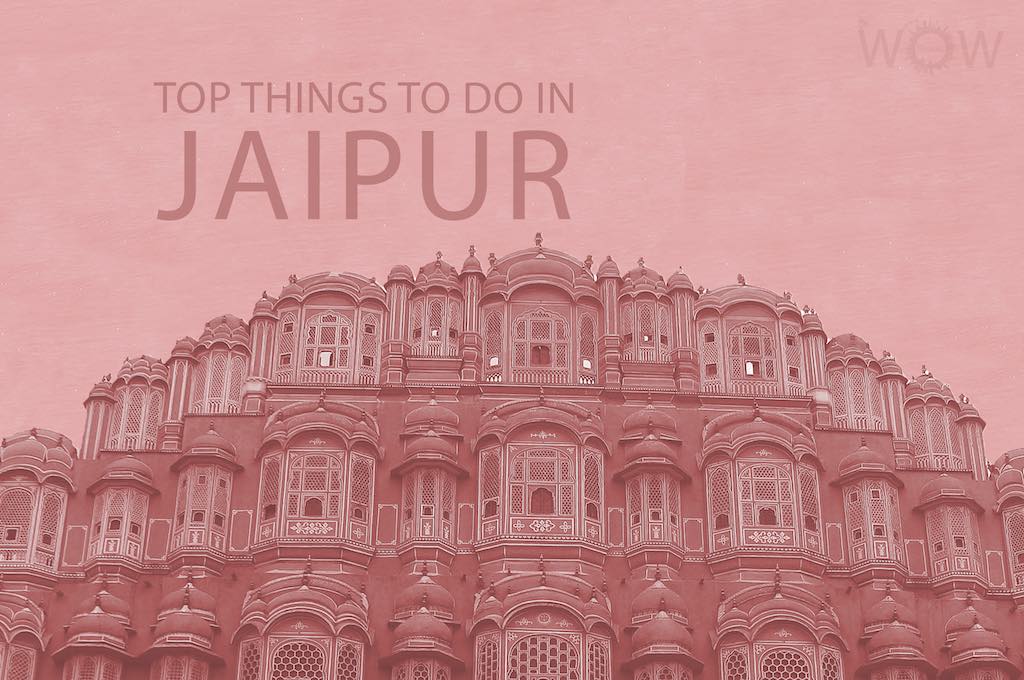 One of India‘s most popular travel destinations is the ‘Pink City,’ Jaipur,  a new entrant into the UNESCO World Heritage List. Jaipur is an intriguing mix of grand historical palaces staring down in consternation at chaotic streets where camels amble amongst cycle rickshaws and motorcycles. Jaipur, roughly a 5-hour drive southwest of New Delhi, is a major stop on the Golden Triangle tourist circuit, and with good reason too. There are many places to visit in Jaipur, a bustling city with a rich history that stares you right in the face in the form of the majestic buildings that the Maharajas once occupied. A trip to the city will definitely stay with you for a long time to come.

Booking a private day tour is the way to go if you want to explore the top things to do in Jaipur. An air-conditioned vehicle will get you from point A to Z. A professional private guide, buffet lunch, and hotel pick-up and drop-off all make sightseeing here a hassle-free, memorable experience.

The Palace of Winds is an impressionable landmark located at the edge of the City Palace. This grand monument was built in 1799, by the grandson of the founder of Jaipur.  Built from red and pink sandstone, the honeycombed facade of the palace was designed to resemble the crown of the Hindu deity Krishna. The 953 lattice windows were designed for the queens. Since they were not allowed to be seen in public without covering their faces, they could look out safely at celebrations from these latticed windows. The structure that faces the street is actually the back of the palace.

If you’re looking for one of the best views of Jaipur, this is where you’ll find it. Built on the top of the Aravalli Hills between 1734 and 1868, the Nahargarh Fort offers sweeping views of the entire city.  You can understand just why this strategic location was chosen for the fort. Within the fort, you’ll also find the Madhavendra Bhawan, which was the summer home for the royals. Many restaurants serving traditional cuisine are located in and around the fort. Also, did you know that you can admire the fort from up high? Go on a thrilling hot air balloon safari and see the length of the fort’s walls as well as the colorful villages from 2,500 feet above as you gently drift with the wind.

For the less discerning, these random arrangements of big stone monuments may seem like an outdoor art gallery with abstract sculptures. However, look a little closer and you’ll realize that they actually make up an observatory. This interesting observatory was also built by Maharaja Jai Sing II whose fascination for astronomy was well known. He built five of these observatories in different parts of the country—including Varanasi and Mathura—but the one in Jaipur is the largest and best-preserved. Each of the structures is there for a reason and a good idea would be to hire a local guide to explain their significance. It’s definitely one of the interesting places to visit in Jaipur.

One of the most popular forts in the country is the striking sandstone and marble Amber Fort. The honey-colored fort is a 20-minute drive out of the city, standing majestically on the top of a small hill. Amber was the former capital of Rajasthan and construction of the fort began under Maharaja Man Sing in 1592. The Jai Singhs later extended and completed it before moving the capital to Jaipur. The fort is a fascinating place to visit with its extensive palace complex and spectacular garden courtyard. Visitors also have access to some of the restored underground tunnels. Guides will regale you with fascinating stories of the fort’s rich past. A sound and light show is held below the fort near Maota Lake.

The City Palace is another of Jaipur’s impressive landmarks located at the center of the Old City. It was first established by the founder of Jaipur, Maharaja Sawai Jai Singh II in the early 18th century. The outer wall of the complex which extends over a very large area is credited to him. However, the palace has undergone several reconstructions and expansions since then. Today several buildings make up this complex, which is a gorgeous blend of Mughal and Rajasthani architecture. There is a museum, an art gallery, and several interesting buildings to explore. The descendants of the royal family still occupy part of this massive complex, one of the top places to visit in Jaipur.

Another imposing fort above the town of Amber is the Jaigarh Fort which was also built by Jai Singh in 1726. This stern-looking fort was one of the strongest of its times and withstood many attacks, never being captured. There’s plenty to see at the fort from residential areas, reservoirs, and the world’s largest wheeled cannon. The largest water tank within the complex was also a source of great speculation as people were convinced that some part of the royal treasure belonging to the Kachhwahas was buried here. However, nothing has been found so far despite the efforts of the Indian government.

In a rocky valley nestled between cliffs is the Galta temple, more popularly known as the Monkey Temple because of the large number of primates that live here. One of the top places to visit in Jaipur, the temple complex has a few sacred water tanks and some original frescoes depicting the life of the deity Krishna and the athletic feats of the maharaja. Since natural water resources are quite scarce in the dry state of Rajasthan, the discovery of a natural spring was honored with a temple.

Jaipur’s central museum is housed in a grand old building designed by Sir Swinton Jacob. The fascinating Albert Hall which opened in 1887, is a mix of English and North Indian architecture. A good time to visit is at night when the building is spectacularly lit up. Rajasthan’s oldest museum has an interesting collection of art, dioramas, sculptures and even has an Egyptian mummy. Not too far away, about 2 km (1.25) miles is the breathtakingly lavish Taj Rambagh Palace hotel. Constructed in 1835, this former residence of Jaipur’s Maharajah makes guests feel like royalty themselves with its luxurious amenities.

The Water Palace is a vision from afar as it seems to be floating on the Man Sagar Lake. The origins of the palace are quite sketchy but the palace and the lake were enlarged in the 18th century by Jai Singh II. The 5-story palace built from red sandstone is quite a marvel as four of the floors remain underwater. Although entry to the palace is prohibited, it’s quite a sight while boating on the lake. Admiring it from afar is one thing to consider if you’re wondering what to do in Jaipur. However, take a full-day city tour and you can also enjoy a memorable camel ride at the Water Palace.

One of the most intricate pieces of architecture is the Abhaneri Stepwell located about 20 km from Jaipur. Chand Baori, as it’s popularly called, dates back to the 8th and 9th centuries. This deep four-sided well has 3,500 narrow steps which are over 13 stories extending 30 meters into the ground. The air is a lot cooler at the bottom of the well than at the top. The well was therefore used as a place for the community during periods of intense heat. One side of the well has a resting place for the royals.

Beneath Nahargarh fort, just below the city walls, are the intricately carved stone monuments built to honor the royals. These cenotaphs or empty tombs are located in serene surroundings overlooking the Jal Mahal and are surprisingly not overrun by tourists. So if you’d prefer to avoid crowds, it’s one of the best places to visit in Jaipur. The most impressive of these marble cenotaphs is the one for Jai Singh II.