India is a country of glaring contrasts, one that you will absolutely love or one that will have you clambering to get on the next flight home. Whatever the effect, your visit is sure to leave a lasting impression. Chaotic cities with blaring horns and extra friendly people pleading with you for a selfie, in their smattering of English, can be quite a culture shock for a first-timer. However, take time to settle in and you’ll realize just why people keep coming back to this great land.

India is divided into 29 states with each state embracing its own unique language, culture, food, and traditions. The title ‘unity in diversity’ sits well in this country where the north is as radically different from the south. While Hindi has been made the national language, people in the southern states refuse to speak it as they have their own regional languages. However, the binding language is English, a reflection of India’s colonial past.

It’s not just the people, but the landscape too which is strikingly different. The beautiful north which lies at the foot of the stunning Himalayan range is as visually appealing as the backwaters of the south or the white sands of Kutch. The majestic beauty of Kashmir, Sikkim, and Ladakh has been the inspiration of many a poet, while the golden sands of Goa continue to attract people from far and wide.

India has a rich and varied history that is reflected in its striking monuments. Some of the must-see destinations are the lofty palaces of the maharajas in Rajasthan, Delhi’s grand Mughal monuments, Mumbai‘s colonial edifices and the erotic Khajuraho temples in Madya Pradesh. A visit to these temples will leave you with no doubt as to why India is the land of the Kamasutra. However, one of the top things to do in India is to visit the stunning mausoleum of love, the iconic Taj Mahal, extolled as a ‘teardrop on the cheek of eternity.’
India is the birthplace of many of the world’s religions and so spirituality reigns supreme here. From spectacular Buddhist monasteries, and beautiful temples, to stunning churches and mosques, religion is everywhere. India’s capital New Delhi, or just Delhi, is like an assault on the senses – but the good kind. Whether it’s the winding, vibrant lanes of Old Delhi, the delectable street food, or its eons-old architecture, Delhi is one enthralling destination. It’s also considered a forthright “pink” destination in a deeply conservative country where LGBTQ… 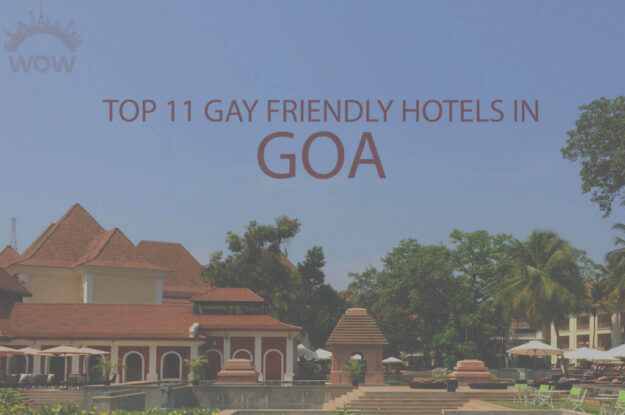 Tucked on India’s charismatic Konkan coast is its smallest state, Goa. A gorgeous blend of Portuguese and Indian cultures, Goa is all about the sun, sand, sea, spirituality, seafood, and sossegado (a Portuguese concept meaning “quiet”). If there’s anywhere in India where LGBTQ travelers can feel comfortable, it’s the unconventional Goa. In fact, being a…

Kolkata, formerly Calcutta, is India’s third-largest city and whose origins go back almost 400 years. India’s cultural and intellectual capital also happens to be one of the first Indian cities to have organized gay parties! Despite Kolkata remaining largely conservative, the city is home to a large gay population that blends in at mixed nightclubs,…

Hyderabad has one of the most polarizing skylines in India. On the one hand, Old City is home to winding spice bazaars and architectural marvels. On the other hand, we have ‘Cyberabad,’ a.k.a. HITEC City, its snazzy cousin brimming with pubs, restaurants, and malls. Given India’s traditional outlook, you might be surprised that Hyderabad is…

11 Most Visited Cities in India

The British nicknamed India the ‘brightest star in the sky,’ – and for good measure. The astonishingly diverse country is a melting pot of cultures, traditions, languages, and ethos and boasts exuberance and flamboyance in every form of the word. What’s more, it’s also the ultimate travel destination. In fact, the places to see range…

Goa is a kaleidoscopic blend of Portuguese and Indian cultures, sweetened by the sun, sand, sea, seafood, spirituality, and susegad! This pocket-sized paradise, a.k.a. sunshine state is everyone’s favorite getaway, and even more so now. Whether it’s the long and beautiful coastline, hippie markets, Portuguese villages, or green fields, Goa’s charm is boundless. Making it all…

11 Best Hotels in Agra Near the Taj Mahal

Straddling a large bend of the holy Yamuna River is the gorgeous city of Agra. It’s famed as the legendary home of the marble mausoleum of Taj Mahal, which is an immortal ode to love. The magical allure of the stunning UNESCO World Heritage Site draws travelers like moths to a chalk-white flame. And no…

The South Indian city of Chennai is one captivating confluence of cosmopolitan neighborhoods and urban villages. Tamil Nadu’s capital has long been a keeper of culinary, religious, and artistic traditions, and continues to be so. Recently, the city has gained a fair bit of cosmopolitan glamor in the form of new-age restaurants, quirky cafes, dazzling…

Mumbai is known by many monikers – City of Dreams, City of Illusions, Maximum City, and rightly so. It brims with manic energy and is bursting with awe-inspiring architecture, history, and cuisines. Moreover, it’s also India’s financial powerhouse and the birthplace of the famed ‘Bollywood.’ So, it’s no surprise that Mumbai has a cosmopolitan vibe…

If the color pink had a home, then Rajasthan’s capital Jaipur would be it. Before King Edward VII’s visit in 1876, the entire city was given a fresh coat of pink paint. Close to 150 years later, Jaipur still preserves that rosy glow. At its heart sits the magnificent city palace, which continues to be…

Frenetic, fabulous Mumbai holds a bunch of fitting titles. Its the City of Dreams, the Financial Capital of India, and the Gateway of India, and these are just some of its monikers. It’s a hotspot for tourists, boasts a thriving nightlife, and simply doesn’t seem to stop. Also, right in the middle of this vertical…

There are few cities like Delhi on this planet. Firstly, there have been eight historical versions of the city, each built at the same place or nearby. The city is famous for its frenetic bazaars, lip-smacking street food, and the rich historic architecture of Old Delhi. If you’re flying to Delhi for a short holiday…

The ‘Silicon Valley’ of India Bengaluru (earlier Bangalore) is a fabulously cosmopolitan city. Besides a great climate, it also has an amazing drinking and dining scene and stunning Victorian-era architecture. Plus, it’s blessed with a modern metro system. This is a blessing since the Kempegowda International Airport lies at least 40 km (24.8 mi) from…

Maximum City, City of Dreams, and “Maya Nagari” or City of Illusions Mumbai throbs with an energy that is as fantastic as it is frenetic. The vertical city is actually a merger of seven islands and has been an important marine port forever. Mumbai is not just India’s financial and economic capital but also home…

The splendidly enchanting desert-fortress city of Jaisalmer in Rajasthan, India is an exotic mirage rising from the golden sands of the Thar Desert. There’s so much to explore within and outside the walls of the ‘Golden City.’ There are majestic Havelis, royal palaces, traditional handicrafts, and, of course, the gorgeous Sam sand dunes. The best…

The ‘Blue City’ Jodhpur, also known as ‘Sun City,’ basks in the glory of the beautiful Thar desert. The lovely desert city sits in the shade of the rocky outcrop that is Mehrangarh Fort, one of the largest castles in the world, and is a Tetris-like maze of shimmering medieval streets. Heritage structures in Jodhpur…

11 Best Hotels in Amritsar Near The Golden Temple

The 16th-century holy city of Amritsar is the most revered city in Sikhism and one of the most religious cities in the world. It is home to the stunning Harmandir Sahib, better known as the Golden Temple, one of the world’s most extraordinary sights. The ornate temple, which is the holiest shrine in Sikh culture,…

Top 10 Things To Do In Jaisalmer

India is known for mysticism, a rich history, and a diverse cultural vibe. Steeped in history, the picturesque city of Jaisalmer in the Indian state of Rajasthan is synonymous with an old-world charm that makes you a time traveler. Just 300 km (16 miles) from Jodhpur, it’s tucked in the heart of the Thar Desert.…

One of India‘s most popular travel destinations is the ‘Pink City,’ Jaipur,  a new entrant into the UNESCO World Heritage List. Jaipur is an intriguing mix of grand historical palaces staring down in consternation at chaotic streets where camels amble amongst cycle rickshaws and motorcycles. Jaipur, roughly a 5-hour drive southwest of New Delhi, is…

So we visited Amritsar, the holy city of the SIkh people, and we simply fail in love with them!. Anywhere you go you see warm and peaceful people. Who Are They 1 Sikhism is a monotheistic faith founded by Guru Nanak who was born in 1469 to a Hindu family. Sikhism, which began in India’s…

India‘s smallest state, Goa, packs quite a punch when it comes to hospitality and vacationing. With more than 100km of beach stretching across the state and a party vibe that’s unparalleled to the rest of the country, Goa is where India heads to bring in the New Year. Located on the southwest coast of India,…

Varanasi’s claim to being the oldest city in the world may still be undecided, but there is no doubt whatsoever that this city is known to every Hindu in the world as a place they must visit at least once in their lives. A dip in the Ganga here is supposed to cleanse one of…

Top 11 Things To Do In Dharamsala

Dharamsala is a special place in India. It is where the Dalai Lama calls home after fleeing from Tibet. There are Tibetan people that settled here on the upper part of Dharamsala, also known as McLeod Ganj. On the lower part, it is mainly Indian people. With such diversity, there is much to see here.…

Top 12 Things To Do In Ladakh

Cushioned between the Himalayan Range and the Karakoram Range in Northern India, Ladakh, “the land of high passes”, is a popular tourist destination for adventure seekers and mountaineering enthusiasts. This rugged and beautiful landscape is a part of a long-running political battle and is sometimes known for its armed conflict between India and its neighboring…