12 Most Incredible Buddhist Monasteries In The World 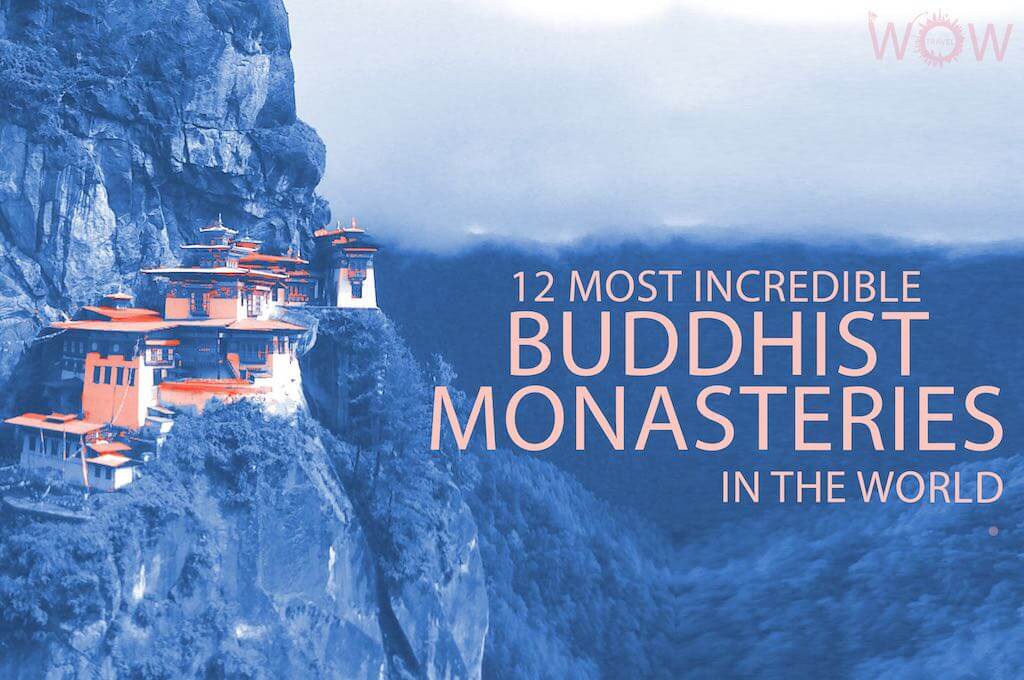 Buddhist monasteries generally called ‘viharas’ have been around for centuries. They first came into existence around the fourth century BC as retreat centers during the wet season. Monks and nuns were restricted from moving around too much during this three-month period to prevent any disturbance to the growth of plants and also to protect them in the harsh weather. Over a period of time, monasteries became centers of learning for the purpose of understanding and debating the philosophical principles of Buddhism. As such, monasteries expanded to become what they are today. Some of the most spectacular and largest monasteries in the world are Buddhists.

Hugging the top of a cliffside at a height of 900 meters in Paro, Bhutan, is the beautiful Taktsang Monastery also known as the ‘Tiger’s Nest.’ The temple complex was built in 1692 around the cave where Guru Padmasambhava, the founder of Buddhism in Bhutan, is said to have meditated. It is the most renowned of the thirteen caves in which he meditated. Legend has it that the Guru was carried to this location from Tibet on the back of a tigress. There are many other interesting legends associated with the monastery. Many valuable paintings and artifacts were destroyed by a fire in 1998 but the rest of the monastery was painstakingly restored to its former glory.

Sitting at an altitude of 4,166 meters close to the Spiti River in Himachal Pradesh, India, the Key Monastery stands majestically as a testament of survival. Said to have been founded in the 11th century, the monastery has been the site of many attacks. It was also ravaged by a fire and severely damaged by an earthquake in 1975. The monastery has since been restored with the help of the Archaeological Survey of India. The Chinese influence on the monastic architecture of the 14th century is visible in the paintings and murals that adorn the walls of the monastery. Today, about 250 monks reside within the sacred walls in the winter.

Founded in 1409 by the founder of the Gelug order, Je Tsongkhapa Lozang-dragpa, Ganden Monastery is one of the ‘great three’ university monasteries in Tibet. The monastery was completely destroyed in 1959 during the Tibetan uprising and subsequently reduced to rubble during the Cultural Revolution. The mummified body of Tsongkhapa which had been preserved in a silver and gold-encrusted tomb was also forcibly burned. Since the 1980s the rebuilding of the monastery at the top of Wangbur Mountain in Tibet has made rapid progress.

This amazing piece of architecture was built in the 5th century near Datong city in China. Although the temple appears to be hanging off a cliff, it is actually held securely by oak crossbeams fitted into holes in the cliff. The monastery has the distinction of being the only existing temple that combines three traditional religions of China, Buddhism, Taoism, and Confucianism. Legend has it that the construction of the temple was started by just one man. All 40 halls and pavilions of the monastery are built over 75 meters from the ground, on cliffs.

Adjacent to the historical city of Karakorum lies one of the earliest surviving Buddhist monasteries in Mongolia; the Erdene Zuu Monastery. It was built in the 16th century after Tibetan Buddhism was declared the state religion of Mongolia by Abtai Sain Khan, ruler of the Khalka Mongols. The monastery was damaged in 1688 during the war but was rebuilt almost two centuries later. When communism took over the land, many monasteries in Mongolia were destroyed. However, three small temples and the external wall of the Erdene Zuu survived the onslaught when Stalin pressured the communist leader Choibalsan to leave them as a showpiece. Today the monastery is an active place of worship and a museum.

One of the main attractions in Arunachal Pradesh, India, is the sprawling Tawang monastery, located at an altitude of 3,000 meters above sea level. The monastery which was founded between 1680-1681 in accordance with the wishes of the 5th Dalai Lama, is the second-largest Buddhist monastery in the world. It was the place where the current Dalai Lama initially took refuge when he fled to India. Besides the three-story high monastery, there are 65 residential buildings within the 282m high compound wall. The monastery belongs to the Gelug school of Mahayana Buddhism.

One of the most spiritual centers of Buddhism in Myanmar is the Taung Kalat Monastery located at a height of 737 meters on the plug of an extinct volcano, Mount Popa. It is believed to be the residence of the Nats, 37 Gods who have played a vital role in the country’s existence and is often referred to as Burma’s Mount Olympus. Although all 37 Nats are represented at the shrine, only four of them have their abode here. 777 steps lead to the top of the shrine which can be quite daunting to get to because of the monkeys that inhabit the area.

The second largest and second oldest dzong in Bhutan is arguably one of the most beautiful dzongs in the Himalayan kingdom. Its location at the confluence of the two rivers in the Punakha Valley against the mountainous backdrop paints a surreal picture. Until 1955 it was the administrative center and seat of the Bhutanese Government. Legends abound about how the dzong was built in 1637-38 by the 1st Zhabdrung Rinpoche, Ngawang Namgyal. The brass roofing of the dzong was donated by the 7th Dalai Lama. Natural disasters like flooding, earthquakes and fires have caused extensive damage in the past but the dzong was restored to its old glory when a major restoration was carried out. During winter, the spiritual head of Bhutan with his entourage of monks moves to the dzong.

The second most prominent monastery in Ladakh, India, is the Thiksey Monastery, built in the 16th century. Once established, the monastery grew importance and became the administrative center for 10 other monasteries in the region. It also controlled 1,327 acres of land and had 25 villages attached to it. The numerous buildings of the monastery’s complex cover one side of a hill and are arranged in ascending order of their importance. Located at an altitude of 3,600 meters, the monastery bears a strong resemblance to the former Winter Palace of the Dalai Lama, Potala Palace. The main temple of the complex is 12 stories high. A 15-meter high statue of Maitreya Buddha is one of the most notable features of the monastery. The statue which took four years to complete was built in 1970 to commemorate the visit of the 14th Dalai Lama to Thiksey.

The Yonghe Temple in Beijing, China, literally means the Palace of Peace and Harmony. It belongs to the Gelug school of Tibetan Buddhism and combines the Han Chinese and Tibetan styles. Work on the temple began at the end of the 17th century but was later converted into the residence of Prince Yong. A few years later half the building was transformed into a lamasery for Tibetan Buddhist monks when the prince ascended the throne in 1722. The temple was closed down for 32 years after the end of the Chinese Civil War in 1949. It was reopened to the public in 1981 and is now a functioning temple and a popular tourist destination. A 26-meter tall statue of Maitreya Buddha carved from a single piece of white sandalwood is the main attraction. The best hotels in Beijing for you should offer proximity to this monastery.

Also known as Yumbu Lakhang, this ancient monastery is located in the Yarlung Valley of Tibet. Legend says that the structure was the palace of the first Tibetan king who descended from the sky. It was built at the turn of the seventh and eighth centuries and is said to be the first building to be built in Tibet. It later became the summer palace of the 33rd king Songten Gampo. A thousand years later, the palace was turned into a monastery under the 5th Dalai Lama. During the Cultural Revolution, it was reduced to a single story but was restored in 1983. Restoration works are still under progress.

Located in a remote part of the Zanskar region in Ladakh, India, is the incredible Phuktal Monastery, one of the only Buddhist monasteries in Ladakh that is only accessible by foot. During the summer months, supplies to the monastery are transported by donkeys and horses but in the winter they are transported along the frozen Zanskar River. The monastery itself is a bit run down but what makes it stand out is its location at the mouth of a cave on a high hill. The cave is said to have been used by many Buddhist scholars and monks 2,550 years ago, looking for a peaceful place to meditate. In the 12th century, the monastery was built around the cave by Jangsem Sherap Zangpo.