The 12 Most Beautiful Places In Tibet 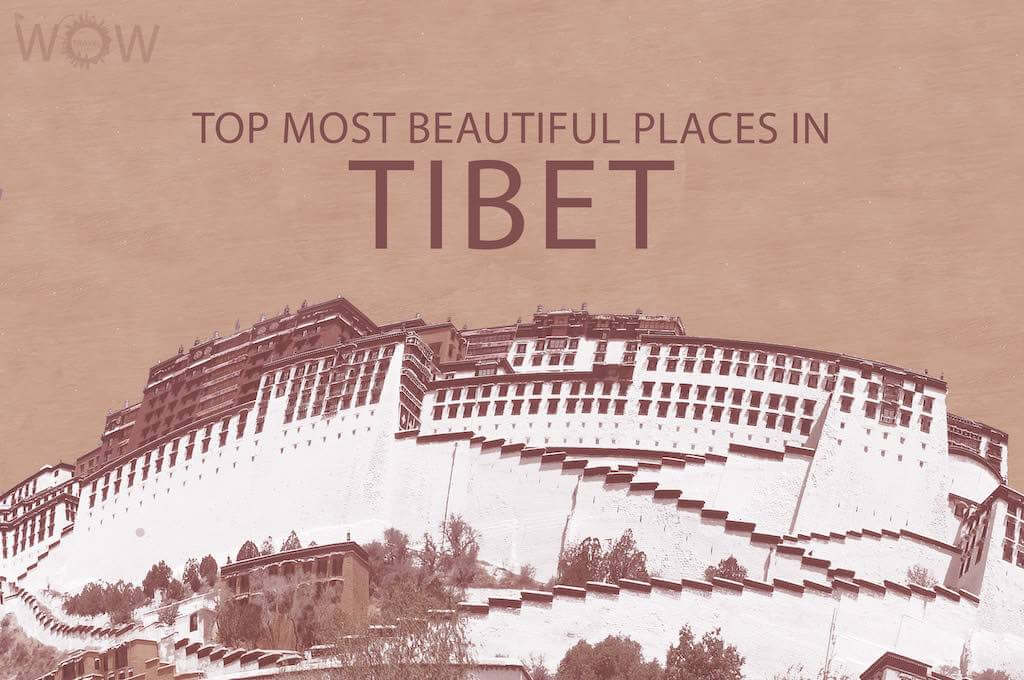 Nestled among the mighty Himalayas, to the north of India, lays the mystical land of Tibet. It is the highest habitable place on the face of this earth lying at an average elevation of 5000 m above the level of the sea. A place where you can touch the sky, if anybody is asked what a journey through Tibet is like, the only answer will be, “Breathtaking!” It is a magical place and tends to leave anybody perceiving its untouched beauty completely dumbfounded. From its people to its food, from the sky above to the mountainous road within, each aspect of Tibet, each second in Tibet is a heavenly experience!

Just 2 km away from the Lhasa River lays the grandest structure in the entire world. The Potala Palace is breathtaking simply because of the grandiose that emanates from it. This extraordinary building is situated at a height of 3750 m above the sea level and looks over the city of Lhasa from a maximum altitude of 100 m. This place is simply humongous and has various astounding palaces within it to get high upon!

At 4718 m, Lake Namtso is the highest saltwater lake in the world. It also happens to be the second-largest saltwater lake in China. Facts aside, this lake offers a majestic view into the serenity of the mountains. This is a holy lake for the Tibetans. Its sapphire-blue waters are so clear that oftentimes it becomes difficult to differentiate between the lake, the sky and the rugged mountains surrounding the lake whilst one is strolling along its banks.

The sight of the perfect reflection of the sky above and the lush green mountains surrounding it upon the clearest electric blue waters is something that one will never forget! Lake Yamdrok is not only a magnificent sight to behold but is also one of the holiest places for the Tibetans. It is believed that the water of this lake guides the friars to the child in whom the soul of the Dalai Lama is resurrected when the present Dalai Lama dies.

Tibet is filled with some of the world’s most extreme geographical features and the Yarlung Tsangpo Grand Canyon can never miss the list. The Yarlung Tsangpo is more commonly known as the Brahmaputra River, once it enters Bangladesh. However, at such an extreme elevation, this river cuts in between the Himalayas and forms the longest, highest and deepest canyon the world has ever witnessed.

Standing tall, no, the tallest upon the surface of the earth is this magnanimous natural structure- Mt. Everest. At a height of 8488 m, this mountain is still growing in height and has its base rooted in Tibet itself. The mountain is a grand sight to behold from so close a distance. The base camp to the Everest climbing expeditions is not far away from Lhasa and regular treks from Lhasa to the base camp are undertaken by a multitude of tourists. This may be a once in a lifetime opportunity and you should definitely let the adventurer within you triumph by taking this breathtaking journey. Once on the trail, you’ll be gifted with such extraordinarily glorious sights, that you will continue dreaming about its wonders for years to come.

A fantastic trekking route among non-believers to the abode of Shiva to about a billion pilgrims every year, Mount Kailash is also in Tibet. Though it is disallowed to climb this mountain, and stories have it that whoever attempted to do so never returned, Mt. Kailash has a mystical allure to it. The trek around the mountain needs to be completed in 3 days for those who believe in the energy of Shiva!

Listed as a World Cultural Heritage site by UNESCO, Norbulingka is just 2 km away from the Potala Palace. Norbulingka roughly translates to the “treasure garden” in the Tibetan language. This is kind of an expansion to the Potala Palace and is divided into three different segments- the front patio, the king’s residence, and finally the elusive woodlands. This extraordinary building has 400 rooms within it and covers an area of 3.6 square km.

The Tibetan word Lulang means to “forget one’s homesickness”. A visit to this place justifies this name as it is indeed heaven that you will be standing upon once you enter the Lulang forest. It is 15 km long stretch of Alpine Forest accompanied with lush green meadows, tiny villages and white cotton-like clouds floating about against a backdrop of the clearest blue sky. Visit this place to forget who you are, to forget the world, and immerse into the dreary depths of nature!

Sakya Monastery is as huge and as grand as any other structures in Tibet can be but its immense specialty lies in its age. Dating back to the year 1268, this monastery will look like any other such ordinary Buddhist temple. However, a closer glance will reveal to any onlooker its ancient age. This library also happens to house a humongous library with ancient books being stacked from floor to ceiling. Not only can this monastery hold as many as 200 monks, but it is also home to 24,000 pieces of sacred Buddhist texts. The most elegant scripture of Tibet can also be found in this monastery, completely written in gold!

Tibet being one of the most prominent centers of Buddhism is home to a fantastic number of Buddhist temples and monasteries. The Jokhang Temple is one such Buddha Temple. This place is a maze of rooms lined with prayer wheels that lead to the shrine of the Buddha. The courtyards and corridors are generally quite empty giving you the chance to experience the joy of solitude.

About 6 main colleges with the most exquisite prayer halls; interesting debates among monks from 3 pm to 5 pm every day; a monastery with a capacity of 5000- you get to see all such wondrous things in the Sera Monastery. A Tsongkhapa disciple founded this larger than life monastery in 1419 as one of the Gelugpa monasteries. 7 km away from Sera is the Pabonka Monastery which can also be visited- it was founded in the 7th century and is one of the most ancient sites in the entirety of Tibet.

The first monastery in Tibet was laid down by King Trisong Detsen in 775. This ancient house of worship is located 170 km outside of Lhasa. The place is just at the banks of the Yarlung Tsangpo, more commonly recognized as the Brahmaputra River and is a picturesque scenario. The entire monastery is built upon the lines of the universe, the central dome being Mt. Meru, the central-most point in the universe, with the surrounding temples being the continents, oceans and other such geographical features.