10 Most Unusual Lakes In The World 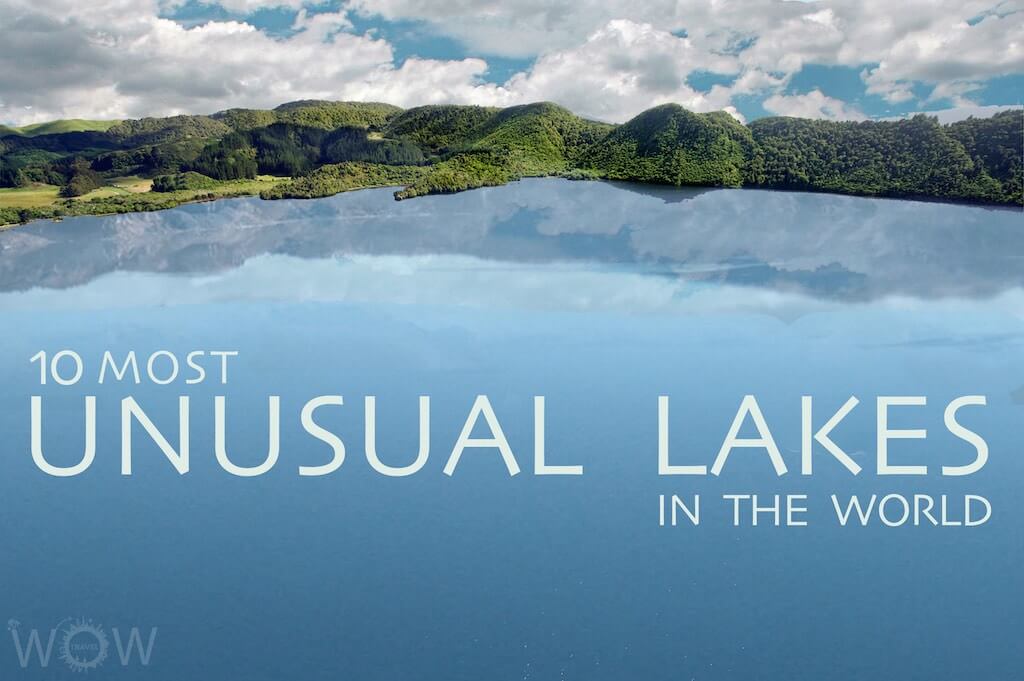 Lakes are some of the most beautiful natural water formations on earth, and although there are more than three million lakes worldwide, there are some that just stand out from the crowd. From pink lakes in Australia to a lake filled with harmless jellyfish in Palau. Check out our list of the 10 Most Unusual Lakes In The World.

Lake Natron in Tanzania is one of the most serene lakes in Africa, but it’s also the source of some of the most phantasmagorical photographs ever captured — images that look as though living animals had instantly turned to stone. The alkaline water in Lake Natron has a pH as high as 10.5 and is so caustic it can burn the skin and eyes of animals that aren’t adapted to it. The water’s alkalinity comes from the sodium carbonate and other minerals that flow into the lake from the surrounding hills. And deposits of sodium carbonate — which was once used in Egyptian mummification — also acts as a fantastic type of preservative for those animals unlucky enough to die in the waters of Lake Natron. Source: livescience.com

Lake Hillier, located in Australia, is famous because its waters are colored in pink. From a distance, Lake Hillier of Australia’s Recherche Archipelago looks like a swath of solid bubble-gum pink. Scientists are still struggling with the mystery that gives it such an unusual color. It is about ten times saltier than the ocean and probably the salinity attracts salt-loving algae and archaea that bear a pink hue.

The lake, which consists of pure liquid asphalt, is located near the village of La Brea, in the south-west of the island of Trinidad. It has an area of about 40 and a depth of approximately 260 feet. This world’s largest reservoir of natural asphalt was discovered by Walter Raleigh in 1595, who immediately found a use for it, which was using the bitumen to furnish wood paneling of ships. Source: art-sheep.com

The steam rising from this lake on a cool day might be tempting, making it seem like one big hot tub. But slip inside, and you’ll be dead within minutes. The Boiling Lake in Dominica is in a state of constant boiling point. Actually, only a whirlpool in the center is boiling, but the water near the shores reaches 71-88 Celsius (160-190 Fahrenheit). Because the lake is under the influence of volcanic activity, you can see very interesting things here.

A crater lake in the Northwest Region of Cameroon in Africa is extremely deep and quite dangerous. It flanks an inactive volcano and sits atop a pocket of magma that leaks enough carbon dioxide to turn the water carbonic. In fact, there’s enough carbon dioxide in this lake to kill. In 1986, Lake Nyos emitted a large cloud of CO2 that suffocated 1,700 people and 3,500 livestock. A degassing tube now siphons water from the bottom of the lake to allow the CO2 to leak in safe quantities. Source: momtastic.com

The Plitvice Lakes are a series of sixteen lakes interconnected by spectacular waterfalls, set in a deep woodland and populated by deers, bears, wolves, boars and rare bird species. A UNESCO World Heritage Site, the lakes are renowned for their distinctive colours, ranging from azure to green, grey or blue. The colours change constantly depending on the quantity of minerals or organisms in the water and the angle of sunlight. Source: oddee.com

While many lakes are round, Canada&amp;#39;s Lake Manicouagan is the only known lake that has been cast into the form of a ring.

This eerie lake in Bolivia has blood red water and is dotted with strange white islands made of borax, the same stuff used in many detergents. The color of the water comes from tinted sediment and a large amount of red algae, which thrive here. Even more striking, pink flamingos often wade in its waters, adding to the contrasts of this otherworldly landscape. Source: mnn.com

Jellyfish Lake is one of Palau’s most famous dive (snorkeling only) sites. It is notable for the millions of golden jellyfish which migrate horizontally across the lake daily. At Jellyfish Lake in Palau in the western Pacific, visitors can witness the beauty upclose without experiencing the terror. The jellyfish here are essentially harmless to humans. Resident jellyfish here have completely lost their sting because they have not had to fight off predators. Source: unusualearth.com

The Dead Sea is not traditionally thought of as a lake, but it is actually a large salt lake. The Dead Sea is the lowest point on earth in any land mass (417 meters below sea level). The quantity of water that evaporates from it is greater than that which flows into it, such that this body of water has the highest concentration of salt in the world (340 grams per liter of water). It is called the Dead Sea because its salinity prevents the existence of any life forms in the lake. That same salt, on the other hand, provides tremendous relief to the many ailing visitors who come here on a regular basis to benefit from its healing properties. It was also the world’s first health resort, for Herod the Great, in about 50 BC, and biblically, was a place of refuge for King David. Source: GoIsrael