17 Most Extraordinary Temples In The World 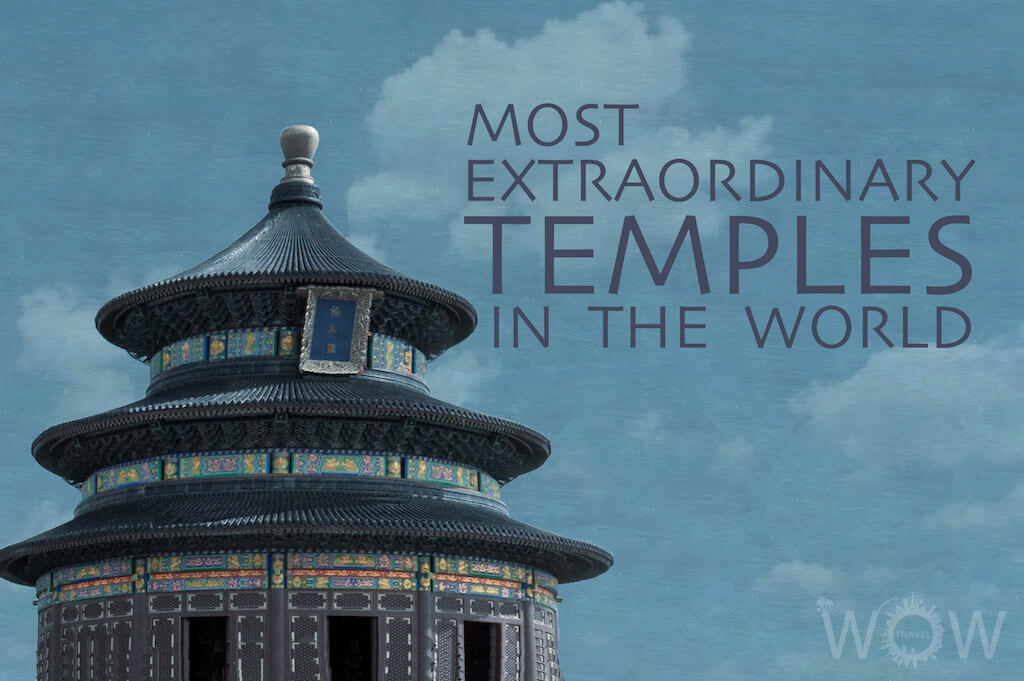 Where there is no temple there shall be no homes. Where there are no homes there are no people. Temples are the living proof of ancient, rich, both extinct and extant civilizations. Call it a chapel, church, mosque, pagoda, shrine, synagogue or cathedral, a temple is an excellent place to start learning and understanding a country and its people. WOW Travel shares with you the 17 Most Extraordinary Temples in the world.

Located in a small town called Paks in Hungary on the banks of the Danube. The church is made completely out of wood. The spires included the expected cross, but also has the unusual shapes of a sun, and a crescent moon. The latter, a symbol of Islam, caused quite a stir in the city when they were unveiled.

The temples of Angkor, built by the Khmer civilization between 802 and 1220 AD, represent one of humankind’s most astonishing and enduring architectural achievements. From Angkor the Khmer kings ruled over a vast domain that reached from Vietnam to China to the Bay of Bengal. The structures one sees at Angkor today, more than 100 stone temples in all, are the surviving remains of a grand religious, social and administrative metropolis whose other buildings – palaces, public buildings, and houses – were built of wood and have long since decayed and disappeared.

Taktshang Goemba or Tiger’s Nest Monastery was blessed and sanctified as one of Bhutan’s most sacred religious sites. It hangs on a cliff and stands above a beautiful forest of blue pine and rhododendrons near the city of Paro and is a major highlight of visiting Bhutan. It was built in 1692 around the cave where a certain guru meditated for three years, three months, three weeks, & three hours way back in the 700’s. And it was this guru, Padmasambhava, who brought Buddhism to Bhutan.

The Temple of Garni is one of the oldest sights in Armenia. It is a first-century Hellenic temple and the only pagan temple in Armenia that survived the Christianization of the country in the early 4th century. It is also the only “Greco-Roman colonnaded building” in Armenia and the entire former Soviet Union.

The complex of buildings here dates from the early 18th Dynasty, when Hatshepsut and Tuthmose III dedicated a temple to Amun, to Roman times. Its history continued until the 9th century CE since a Coptic church was established in the second courtyard of the mortuary temple. Medinet Habu is about 4 miles from the Valley of the Kings near the foot of the Theban Hills at the southern end of western Thebes. The mortuary temple is the best-preserved temple at Thebes. Ramses III had an unusual entrance built for the complex, modeled perhaps on citadels he had seen on military campaigns in Syria. The tower is in the form of a “migdol,” a kind of fortified gatehouse.

The head temple of the Jodo sect of Japanese Buddhism, which has millions of followers and is one of the most popular Buddhist sects in Japan.

The magnificent and colorful Temple of Heaven was constructed between 1406 and 1420 during the reign of Ming Emperor Yong Le (reign: 1403-1424), who also oversaw the creation of the Forbidden City during the same period. It Considered the holiest of Beijing’s imperial temples. It has been described as “a masterpiece of architecture and landscape design” and has also been listed as one of the World Cultural Relics by the UNESCO.

The Golden Temple is situated in Amritsar, located in Northern Punjab, India, which is close to the border of Pakistan. It is the centralgurdwara, or worship place, for all Sikhs in the world. Its proper name is Harmandir, which means “Temple of God” and is respectfully referred to as Darbar (meaning “court”) Sahib (meaning”Lord”). Darbar Harmandir Sahib is known as the Golden Temple because of its unique features.

The Temple of Srirangam, India

Srirangam is the foremost of the eight self-manifested shrines (Swayam Vyakta Kshetras) of Lord Vishnu. It is also considered the first, foremost and the most important of the 108 main Vishnu temples (Divyadesams). This temple is also known as Thiruvaranga Tirupati, Periyakoil, Bhoologa Vaikundam, Bhogamandabam. In the Vaishnava parlance the term “KOIL” signifies this temple only. The temple is enormous in size. The temple complex is 156 acres in extent. It has seven prakaras or enclosures. These enclosures are formed by thick and huge rampart walls which run round the sanctum. There are 21 magnificent towers in all prakaras providing a unique sight to any visitor. this temple lies on an islet formed by the twin rivers Cauvery and Coleroon.

Believe it or not, this is a real place – Wat Rong Khun, better known as the White Temple, is a Buddhist temple in Thailand that looks like it was placed on earth by a god. Though it may have involved divine inspiration, it was in fact designed by a man. Chalermchai Kositpipat, a Thai artist, designed the temple in 1997. It was almost destroyed by an earthquake in May 2014, but Kositpipat was inspired to rebuild the temple after an outpouring international support urging him not to give up and let the temple crumble.

This stupa located in the sacred city of Anuradhapura in Sri Lanka. This stupa has a high significance in the country as it represents Buddhist monks of Theravada and Mahayana, the oldest surviving branch of Buddhism.

(Great Eastern Temple) is one of Japan’s most famous temples and a landmark of Nara. Located in Nara Park, in central Nara, Todaiji was constructed in 752 as the head temple of all provincial Buddhist temples of Japan. Todai-ji Temple’s Great Buddha Hall is the largest wooden structure in the world and houses an immense statue of Rushana Butsu.

The Potala Palace has stood for centuries as a testament to the Tibetan people and their beliefs. Thousands of pilgrims from around the world come every year to pay homage to this grand estate and the symbol it stands for. This temple has the honor of being the highest ancient palace in the world, with its highest point reaching 3,750 meters (12,300 feet) above sea level. This 13-stories-high palace has over 1,000 rooms and covers over 13 hectares (32 acres). It considered being one of the wonders of the world for its physical structure and its importance in Tibetan history.

An Abu Dhabi landmark, the Sheikh Zayed Mosque was the vision of Sheikh Zayed bin Sultan al Nahyan, the first president of the United Arab Emirates. Its construction was finished after the leader’s death in 2004.

The magnificent Borobudur temple is the world’s biggest Buddhist monument, an ancient site widely considered to be one of the world’s seven wonders. Built-in the 9th century during the reign of the Syailendra dynasty, the temple’s design in Gupta architecture reflects India’s influence on the region, yet there are enough indigenous scenes and elements incorporated to make Borobudur uniquely Indonesian. This awe-inspiring monument is truly a marvel. After a visit here you will understand why it is Indonesia’s most visited tourist attraction and a famous icon of Indonesia’s cultural heritage.

AKA The temple of the Emerald Buddha, located on the ground of the Royal Palace in Bangkok. It is the most revered Buddhist shrine in Thailand. It consists of over 100 brightly colored buildings, golden spires, and glittering mosaics, and dates back to 1782 when Bangkok was founded.

Our own brain and our own heart are our temples; our philosophy is kindness and traveling our way or learning. Colors may fade, temples may crumble, empires do fall, but the history trapped within these temples’ walls endure and perdure forever.