Top 12 Things To Do In Yangon 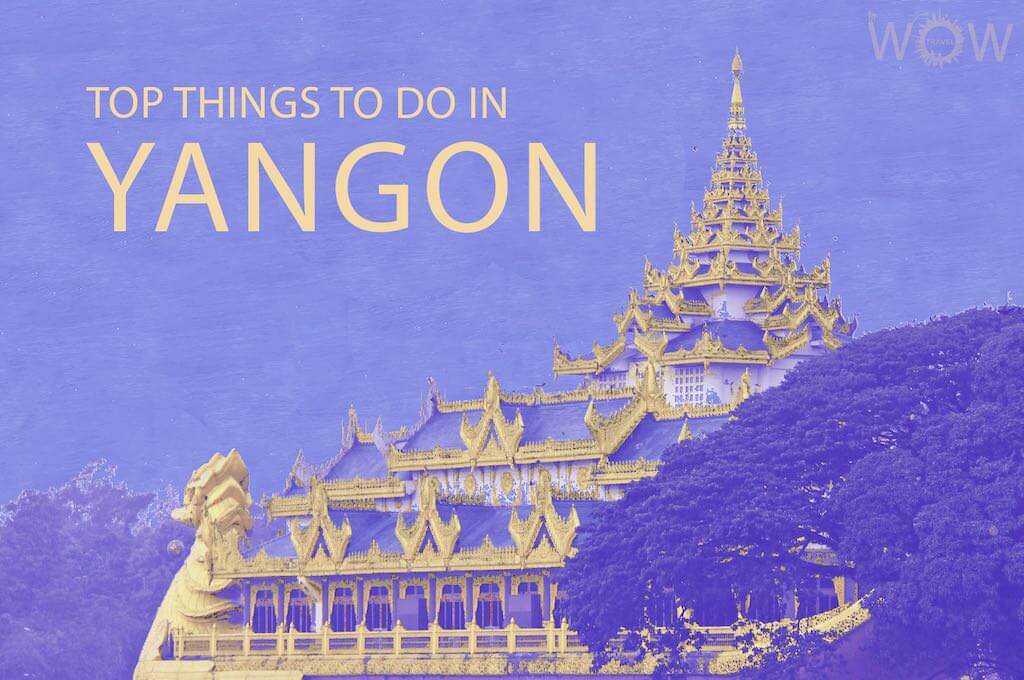 The largest city and the commercial capital of Myanmar, Yangon or formerly Rangoon is a tourist hotspot of the country as well as south-east Asia.  It was originally developed as a center for sea trade along the coast of Bay of Bengal and later developed into a prime metropolis. Although the city has witnessed the toughest times of the colonial era, civil wars and natural calamities, Yangon has flourished with its integrity and a sound confluence of Chinese, Tibetan and Indian cultures. To sum it up, the city has all the essential ingredients to quench the wanderlust of a traveler with its retro essence, splendid Pagodas, colonial architecture, and unique urban lifestyle! Here are the top 12 picks of Yangon:

The iconic Shwedagon Pagoda or Shwedagon Zedi Daw (official name) or Great Dagon Pagoda or the Golden Pagoda, is a sacred Buddhist Stupa and historical marvel. Built during 6th – 10th century on Singuttara Hill, the 326-foot-tall (99 m) pagoda ornaments the Yangon skyline. The basic structure of the pagoda is brick-made and layered with real gold plates. The architecture and maintenance of the pagoda have always been patronized by rulers and monarchs across centuries. There are four beautiful entrances guarded by giant leogryphs. The Pagoda is considered as the most sacred since it houses original relics contemporary to Lord Buddha. For its history, architectural grandeur and serene Buddhist culture, the Golden Pagoda is certainly the most acclaimed tourist destination in Myanmar!

Chaukhtatgyi Buddha Temple is a celebrated Buddhist temple located in Bahan Township of Yangon. The temple is famous among the tourist as well the Buddhist pilgrims for the most revered statue of reclining Buddha in the country. The reclining Buddha statue is 217 ft (66 meters) long, and one of the largest in Myanmar. The construction of the statue was patronized by a wealthy Buddhist businessman of Myanmar, Sir Po Tha, in the late nineteenth century. Initially, was an open-air statue, which was later placed inside a temple to protect it from natural degradation. The architecture and designs are grand and colorful, typical to Chinese architecture.

The Swal Taw Pagoda of Yangon is another famous of the gilded pagodas in Myanmar. The Pagoda comprises stories and preaching of Budhha covering the walls and ceilings of the pagoda. It is in the popular saying that Swe Taw Myat pagoda was built to enshrine a sacred Buddha tooth relic. There is also an ivory copy of the Buddha relic from China, that has been protected inside a glass case encircled by small green jade Buddha images and is exhibited to the public.

One of two major lakes in Yangon, Kandawgyi Lake or the “great royal lake” is famous for its serene location for an evening walk around the city. Located east of the Shwedagon Pagoda, the Royal Lake is artificial with water channelized from Inya Lake. It was created by the British during the colonial reign to supply clean water to the city. The circumference of the lake is approximately 8 km with a depth of 50 to 115 cm. The Kandawgyi Lake is surrounded by the Kandawgyi Nature Park and the Yangon Zoological Gardens, comprising a zoo, an aquarium, and an amusement park.

Saint Mary’s Cathedral is a famous Catholic cathedral in Botahtaung Township of Yangon and is the largest cathedral of Myanmar. The unique feature of the cathedral is its Dutch architecture designed by celebrated Dutch architect Joseph Cuypers in the nineteenth century. Originally a part of British India, the church construction has been patronized by the government of India. The exterior of the cathedral comprises of impressive red brick walls along with spires and classical bell towers.

An artificial lake constructed by British rulers as a water reservoir of the city, the Innya lake is the largest inland water body of the Yangon region. It is a celebrated lake located downtown with long paved walking paths around, well-maintained gardens and recreational destinations in the proximity. The lake is certainly a favorite destination to spend a peaceful evening (or a romantic evening maybe!).

The Botahtaung Harbor is located on the banks of the Yangon River and is a popular destination due to its bridged Jetties and ferry halt. The popular harbour gives a stunning view of the waterfront with vessels, small modern tourist cruisers, and old Chinese boats. The Botahtaung Pagoda is located in the adjacent area which draws tourists as well. The harbor has eateries to satisfy the taste-buds of visitors with traditional cuisines.

An amazing war memorial for the Burmese and Indian soldiers who died during World War II on behalf of the British Commonwealth army, Taukkyan War Cemetery is maintained by the Commonwealth War Graves Commission. It has splendid monuments and artifacts in the memory of the brave hearts. Taukkyan War Cemetery is one of the largest war memorials in the world with around 8000 graves, an additional 900 graves for unidentified soldiers and cremation memorials of another 1000 soldiers.

The Yangon Zoological gardens of the Victoria Zoo (formerly) is the second-largest zoo of Mayanmar. The zoo contains 145 species of land animals, which includes endangered species like the tiger, the takin, Asian elephant, the Burmese large tortoise, the great hornbill, the marsh crocodile, and the eld’s deer. The zoo also has over 300 species of amazing flora. The Natural History Museum located at the zoo has exhibits of taxidermy, which comprises rare species of Burmese fauna explained with explicit charts. The zoo also houses Myanmar’s largest Aquarium and an amusement park (with a roller coaster!) to additionally attract tourists.

An amazing getaway from the hustles of the city, Chaung Thar is a perfect destination for a pristine beach experience. The beach is a 5 hours’ drive from the main city to the coast of Bay of Bengal. Visitors can go for a good sea-bathing or a lazy walk over the sands with the coconut forest encircling the shoreline as a backdrop. There are famous resorts and restaurants to greet visitors with local cuisine and refreshments.

The Maha bandula park or maha bandula garden is named after General Maha Bandula, to commemorate the valiant effort of the General during Anglo-Burmese war. The park houses the iconic Independence Memorial. Eminent buildings such as the Sule Pagoda, the town hall and the high court encircle the park. The park is a green patch with a historic backdrop and an important destination for tourist to grab a few photographic memoirs of the city.

Situated atop a hill, the serene Nga Gyi Pagoda is famous for its huge statue of Lord Buddha in sitting posture. The pagoda is beautifully decorated with religious paintings and inscriptions from Buddhism history. The carved wooden artifacts, statues along with iron structures add to the architectural splendor of the Pagoda. The confluence of Tibetan and Indian Buddhist culture is the prime attraction of the place.