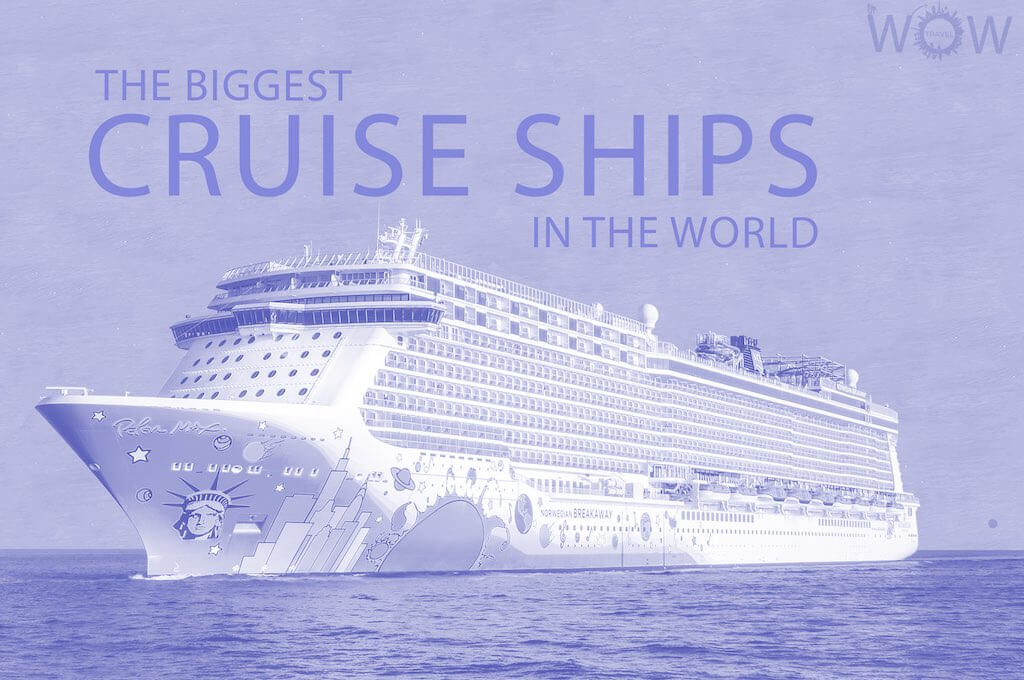 Cruises have always been extremely popular with vacationers, and as more travelers venture out into the high seas, cruise companies have also upped the ante with the facilities. Cruise ships today have become quite monstrous, with huge technological advancements and amenities to satiate the wanderlust. Some of the biggest cruise ships in the world belong to the Oasis and Quantum-class ships of Royal Caribbean International, Vista Project vessels of MSC Cruises, and the Breakaway-plus class of Norwegian Cruise Line. 12 of the world’s largest cruise ships ranked according to their gross tonnage and passenger capacity are listed below.

As of January 2019, the 18 deck cruise ship, Symphony of the Seas, is the largest passenger ship in the world. It stretches 361.011 meters in length and is 72.5 meters tall. The ship has 18 decks out of which 16 are used by guests. The 25th ship belonging to Royal Caribbean Cruises Ltd is an Oasis-class ship. The ship boasts of being the ultimate family vacation with a line-up of interesting experiences such as the Ultimate Abyss – a slide that towers 10 stories high. The ship also has 22 restaurants, 24 pools, a ‘central park’ with more than 20,000 tropical plants and 2,759 cabins. It can accommodate a maximum of 6,680 passengers.

The second largest cruise ship from the Oasis-class, also owned by RCCL has more or less the same features and layout as her sister, Symphony of the Seas. Harmony of the Seas is 362.12 meters in length and has a gross tonnage of 226, 963 GT and a maximum passenger capacity of 6,687. After a construction period of 32 months, the ship first set sail from the STX France docks in Saint-Nazair to Southampton in England. Her maiden voyage from Southampton happened on the 29 May 2016 covering a short distance to Barcelona. One of the stand-out features of this cruise liner is the water-park with its water slides; the first on a Royal Caribbean ship. She also has 23 swimming pools, 20 dining venues a 1,400 seat theater and more than 11,000 works of art. Harmony of Seas was awarded ‘Best Cruise Ship Cabins’ and also ‘Number 4 Best Cruise Ship Overall’ in March 2019.

Much like her two larger sisters, Allure of the Seas is also an Oasis-class cruise ship. These ships are the largest passenger ships to be in service. Allure of the Seas was constructed in Turku, Finland in 2008. It has a gross tonnage of 225,282 GT and a length of 362 meters. She can accommodate a maximum of 6,780 passengers. The ship got her name through a contest that was held to name her and her sister ship, Oasis of the Seas. The ship features an ice skating rink a two-deck dance hall and a state-of-the-art theater which can seat 1,380. She also has 25 dining options which include a Starbucks coffee shop and 7 distinct neighborhoods. In March 2019, in the 9th annual Cruise Critic Cruiser’s Choice Awards, the Allure of the Seas was named the ‘Number 2 Best Cruise Ship Overall.’

Although both the Allure and Oasis of the seas were built to the same specifications, Oasis of the Seas is 50 millimeters (2.0 in) shorter than her sister. This wasn’t intentionally done but could have been due to temperature differences when the measurements were taken. When the Oasis first set sail, she set a record of being able to carry over 6,700 passengers which was unheard of at the time. During her first float-out, she was involved in a minor accident when her port-side hit the dock because the tugboats that were pulling her could not control the ship. This resulted in some minor damages. Some of the facilities of the ship include a miniature golf course, five swimming pools, a zip-line, and a casino. There are numerous other experiences to keep passengers occupied.

AIDAnova from AIDA Cruises is the first cruise ship in the world that can operate completely on liquefied natural gas (LNG). Launched in August 2018, as the lead ship in Aida’s Excellence-class ships, with a gross tonnage of 183,900 GT and a length of 337 meters, the ship can accommodate up to 6,600 passengers. The ship has a water park, three giant water slides, a mini golf course, and a climbing garden as part of its activities. She also has more than 80 spa treatments and three outdoor Jacuzzi.

Meraviglia is the first in the series of MSC’s new ‘Vista Project’ vessels. With 15 passenger decks and a length of 315.83 meters, the Meraviglia can accommodate up to 5,654 passengers. In 2017 it was the 4th largest cruise ship in the world. Some of the ship’s facilities include a water park with waterslides, a promenade with an LED roof and over 10 dining areas. It also has a theater and a rope course. The building of the ship featured in the television series Building Giants, titled ‘Monster Cruise Ship.’

MSC Bellissima made her debut in Southampton, UK in March 2019 as part of the MSC Cruises’ Meraviglia-class of cruise ships. The 4,500 passenger ship has a gross tonnage of 171,598 GT and is 315.83 meters in length. Like the other Meraviglia Class ships, the Bellissima too has scrubber technology which neutralizes carbon dioxide emissions. The highlights of the Bellissima are the two new Cirque du Soleil at Sea shows, created exclusively for her. Another interesting feature of the MSC Bellissima is the artificial intelligence digital cruise ‘assistant’ called Zoe which can answer 800 cruise-related questions. The indoor promenade that projects different scenes throughout the day is another stand-out feature of the ship.

Quantum of the Seas is the lead ship in the Quantum class of cruise ships owned by Royal Caribbean International and the third largest class of cruise ships. The 347.08-meter long ship weighing 168,666 GT was constructed by Meyer Werft. The ship has 18 restaurants, a jewel-shaped glass capsule that ascends to more than 300 feet in the air and a realistic indoor skydiving simulator. Although the Quantum class is slightly smaller than the Oasis ships, they offer a similar experience.

Anthem of the Seas is the second Quantum class of ships owned by Royal Caribbean. The ship has a gross tonnage of 168,666 GT and is 347.06 meters long, accommodating a maximum of 4,905 passengers. She was christened by Emma Wilby, on 20 April 2015. Wilby, a British travel agent was chosen not only because she was the epitome of ‘grace, beauty, social conscience and a sense of adventure,’ but also because she could sing. The ship’s maiden voyage on 22 April 2015, was an eight-night cruise to France and Spain. Like the other cruise ships from RCCL, Anthem of the Seas is also equipped with many state-of-the-art facilities. A Wave Loch FlowRider surf simulator and a jewel-shaped glass capsule that is raised 300ft above the ocean, are her star attractions.

Ovation of the Seas is the third Quantum-class ship of RCCL. It entered service on 14 April 2016. The gross tonnage is the same as her sister ships 168,666 GT and is only slightly longer at 384 meters. The ship operates between the two ends of the Pacific. It spends the summer months in Seattle in the Northern Hemisphere for cruises to Alaska and is in Sydney, Australia the rest of the year. The Quantum-class ships of RCCL are renowned for the most advanced staterooms. The Ovation of the Seas also has the first ever Virtual Balcony staterooms. Jamie’s Italian, a restaurant owned by celebrity chef Jamie Oliver is also a part of the ship.

This is one of the most recent ships of the Norwegian Cruise Line, entering service on April 21, 2018. The ship is part of Norwegian’s most successful Breakaway-plus cruise ships. With a gross tonnage of 168,028 GT and a length of 333 meters, the Norwegian Bliss is the largest of the Breakaway-plus ships. The ship has 20 decks and is able to carry 4,200 passengers. It was specifically designed for the ultimate Alaska cruising experience. One of the outstanding features of this ship is its two-story go-kart track which sits at the top of Deck 19. It has the distinction of being the first cruise ship to feature a multi-level racing track as part of its design.

Norwegian Joy is another of the Breakaway-plus class of Norwegian Cruise ships which entered service in April 2017. The ship was originally named the Norwegian Bliss but it was later decided that she would be redesigned especially for the Chinese market and so she was renamed. Most ships have been christened by a godmother, but for the Norwegian Joy, Chinese singer Wang Leehom became the godfather of the ship. The 333.46-meter long ship has a gross tonnage of 167,725 GT and can accommodate a maximum 3,883 guests. In 2018 new plans by the company revealed that the ship will now cruise along Alaska, Mexico, and the Panama Canal. A $50 million upgrade is also in the pipework for the ship to bring it on par with the Norwegian Bliss.