Top 12 Things To Do In Aqaba 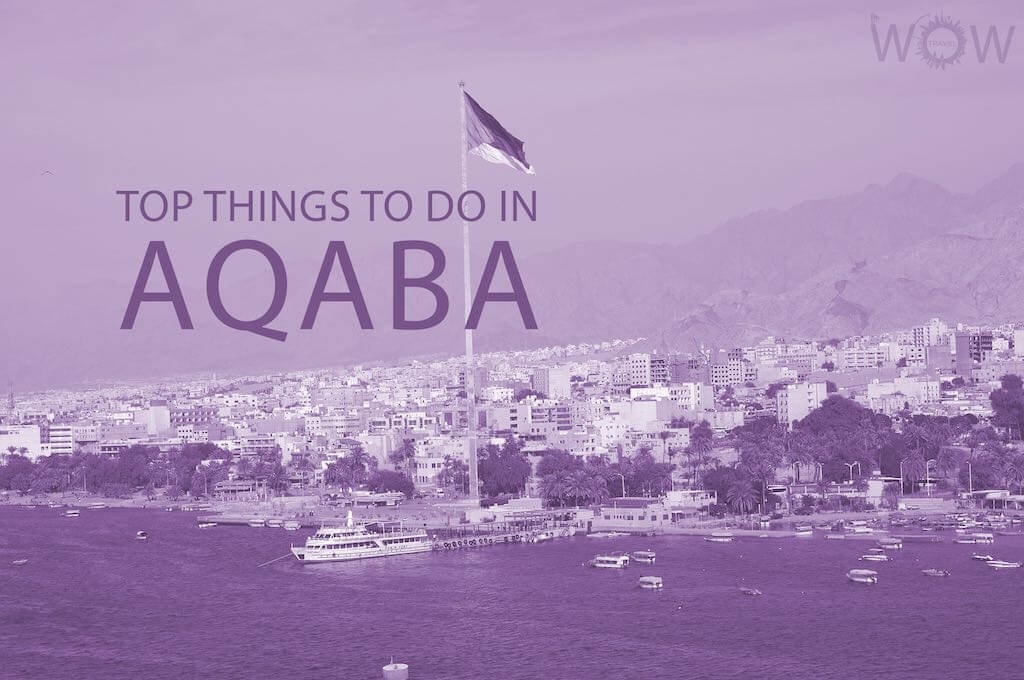 Along the southernmost tip of the country of Jordan lie an exquisite and the country’s one and only coastal city, Aqaba. This happens to be a very important coastal city because of its strategic location between Asia and Africa. Aqaba has always been helpful to other countries with their trades, itself being such an important link. The uniqueness of Aqaba does not end with its important role. It is the gateway into the wonderful dry world of Wadi Rum and hence is an attractive site for tourists from all over the world. This bountiful city in the Gulf of Aqaba opens up wonderfully into the Red Sea through which it maintains all its marine connections. The city is rich in historical events and breathtaking sites and here are 12 things one should definitely do when visiting Aqaba.
Booking.com

Mamluk Castle, also known as Aqaba Fort is of great historic significance, so much that it was the backdrop of the ’62 film, Lawrence of Arabia. It dates back to the 12th century when it was constructed by the crusaders. After the destruction, it was rebuilt by Mamluk Sultan in the 16th century and housed pilgrims on their way to Mecca. The film depicts a very important battle from the First World War wherein the Arab Revolt took place. All these history and an Archaeological Museum nearby make it a must-visit the site.

Sitting briskly under the sun on the southern coast of Aqaba, some 10 minutes from downtown lay the Palm Beach. This beach is free to the public and is a wonderful sight to behold. It is indeed a wonderful setting to just sit and gaze into the romantic sunset while enjoying a cup of tea and sweet conversation. Locals also flock this spot and hence this forms a nice place to get to interact with the locals and glimpse into the Aqaba lifestyle.

A desert that accounts for eons of Aqaba’s history through its ever-changing landforms is a must in the to-do list while in Aqaba. Aqaba itself is a very important gateway into the desert and the trip should be taken. The vibrant sunset with a sky bursting into various shades is a gift that is best enjoyed after a busy day through the desert while resting as guests of the nomadic Bedouins.

The Arab Revolt of 1916 was led by Sherif al-Hussein bin Ali and this mosque is a remarkable tribute to the great man. Sherif al-Hussein’s legacy still goes on with his great-grandson, who is the present king of Aqaba. This mosque, originally constructed in 1975 is worthy of the al-Hussein name with its extensively crafted domes and exquisite minarets. The mosque stands out under the sun because of the immense whiteness of the stones it is made from.

Ayla is the first Islamic settlement outside of the Arabic peninsula and holds a very special and sensitive position in Islamic history. This city was later devastated by attacks from the Crusaders and the Bedouins. However, the well-preserved ruins have recently been discovered towards the northwest of the present-day city center in Ayla and display the market-place, mosque and so on.

Lost in the myriad of deserts and rugged mountains, Petra is considered as the gateway to a mysterious world. Lying in the southeastern part of Jordan, this lost city once thrived as a successful trade center in the west. The marvelous entrance nestled in the lap of mountain ranges showcases an elegant creation of red, white, and yellow sandstone. It is said to be the home of the famous tribe- the Nabataens. Though the architectures in Petra has a strong Arabic influence, the influence of the Crusaders can be seen in some of the buildings like al-Wu’ayra.

Aqaba is a coastal town that lies on the shores of the glorious Red Sea. An appreciable pass time in Aqaba is strolling along the banks aimlessly, watching marvelous sunsets and sipping tea. The Red Seashore is ideal to get off all burdens and enjoy a relaxing time. A number of adventurous activities are also provided such as diving and snorkeling. The Red Sea beaches are clustered with various shops and locals and are a wonderful place to enjoy the Aqaba life!

Not everyone is prone to go on a diving or snorkeling expedition; however, they shouldn’t be left out from the brilliant underwater life around Aqaba. For this, there are many glass-bottomed boat rides starting from the shore and taking the visitors through an amazing journey among the corals. The tours in these boats last from 30 minutes to 1 hour and get as close as the Israeli border.

With increasing concerns about changing ecosystem and biodiversity, the Aqaba Marine Pak aims at conserving and preserving the current Aqaba Marine Ecosystem. This park is a house to 450 different species of fish and 127 varieties of coral formation. The entrance to the park beach is free and visitors can even camp there while enjoying various water sports and wonderful beach time.

This historic building is the oldest church that this world has ever witnessed. It was constructed in the 3rd century A.D. and hence happens to be older than Church of Nativity in Bethlehem or the Church of the Holy Sepulcher in Jerusalem, both dating back to the 4th century AD. The Aqaba Church is a building constructed from mud-bricks and a very simple one- its ruins lie protected, attracting visitors for its unique position in the history of world religion.

Aqaba itself is a walking museum sharing its own tales and the Aqaba Heritage Museum just aids it significantly in doing this. Situated just adjacent to the Mamluk Castle, this museum used to be the palace of Hussein bin Ali and was constructed from mud, gravel, pine leaves, and such materials. The museum features an interesting collection of bronze artifacts as old as 6000 years old along with such priceless beauties as Fatimid coins and a humongous inscription displaying Quranic verses that used to be hung over the Easter Gate.

The Aqaba Flagpole is famous to the world as the sixth-longest free-standing flagpole in the world with an immense height of 130m. This flagpole is visible all the way from the Israeli coastal city, Eilat. Its stupendous length makes anyone witnessing it awestruck and visitors from all over the world come together to get a look at this wonder.