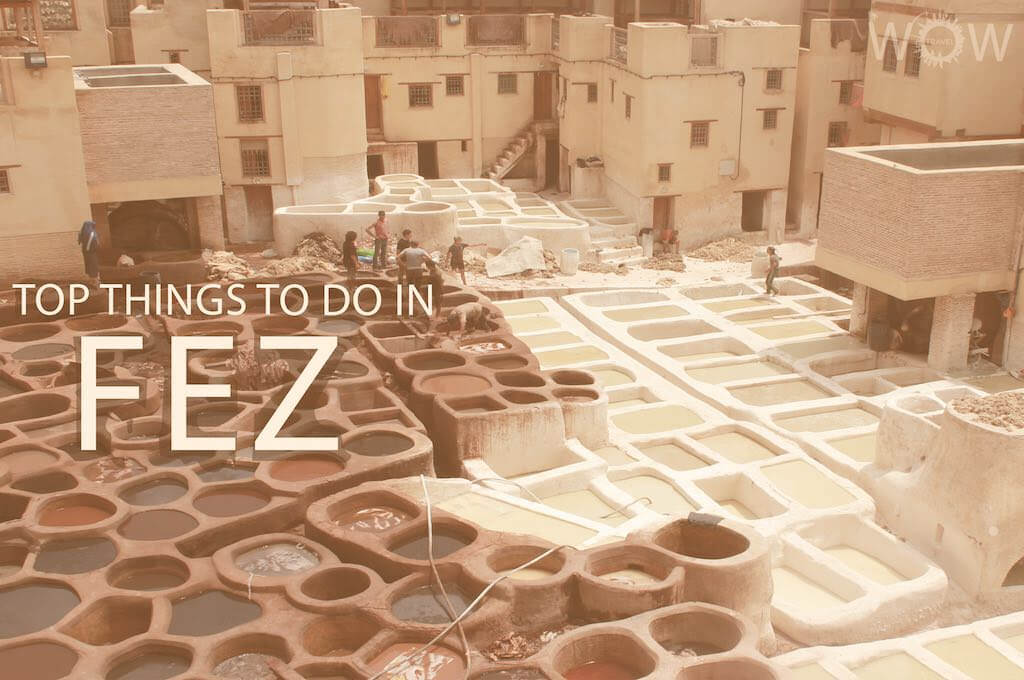 The city of Fez or Fes in northern inland Morocco is the second-largest city and the spiritual capital of the country, having many prominent madrasas (Islamic schools of learning). Fez once attracted many scholars, theologians, mathematicians, and lawyers whose influence on the city is still visible. Due to the number of ancient monuments that still survive, the city is often referred to as the ‘Athens of Africa.’  A trip to Fes would be like a walk through history, especially the Fes el Bali area which is the largest car-free urban center in the world.
[booking_product_helper shortname=”fez”]

One of Morocco’s most beautiful buildings is the Bou Inania Madrasa built between 1351-56 by Sultan Bou Inan. This Islamic school of learning is a brilliant example of Marinid architecture and is the only madrasa in Fez with a minaret. The colorful geometric mosaic tilework and the beautiful lattice screens are definitely worth a visit.  What sets this madrasa apart from the other Islamic schools of learning is that it has a complete mosque in its environs, whereas the other madrasas only have a simple prayer hall. The madrasa was renovated in the 18th century and major restorations were also carried out in the 20th century. It is one of the few places of worship in Morocco that is accessible to non-Islamic visitors.

The largest of the three tanneries in Fez, the Chouara Tannery was built in the 11th century. Located in Fes el Bali, the tannery is a major tourist attraction as one can experience first hand the traditional methods used for dyeing animal hide. One of the best times to visit is in the morning when the pits are filled with colorful dyes. A small sojourn into one of the many leather shops built into the wall near the site will offer you the best views. Some of the best selections of leather in Morocco can be found here.

The walled part of the city of Fez also referred to as Medina of Fez, is a World Heritage Site and possibly the largest car-free urban area in the world. The capital of the Idrisid dynasty, Fes el Bali was founded between 789 and 808 AD. The old city with its rambling streets is divided by a river into two contrasting districts. Entrance to the area is through the imposing Bab Bou Jeloud gate which is about 200 years old. Most of the historic monuments and shopping areas lie on the left bank, while the right bank which was the capital of Idris II is more dominated by local life and beautiful alleyways. The two individual cities were unified in the 11th century when the Almoravids tore down the walls that separated them and built bridges across the river. Fes el Bali a great place to walk through to get a real feel of life in Fez.

The Medersa el Attarine is another fine example of Merenid architecture, built in 1325 by Abu Said. Traditional patterns of Merenid artisanship which include spectacular geometric mosaic tilework (zellige) make up the courtyard. The madrassa was designed as an annex to the Kairaouine nearby.

This restored ‘fundouk,’ an ancient inn used by traveling merchants is now a museum of wooden arts and crafts. Traditionally, merchants would store and sell their goods below whilst they stayed in lodgings on the floors above. The French colonial authority also used the funduq as a police station at the beginning of the 20th century. Today you’ll find beautiful presentations of artifacts of tools used by craftsmen, Berber locks, chests, and musical instruments. A rooftop cafe in the building offers great views over the medina.

Between the Jewish quarter (mellah) and Bab Bou Jeloud you’ll find these beautiful lush gardens. The gardens which are more than a century old have been renovated and reinfused with new life. Jnan Sbil is extremely popular with the locals who enjoy an evening stroll through the leafy trails and enjoy the bird-filled lake. During the Festival of World Sacred Music concerts are held in the garden in the afternoons.

The University of al-Qarawiyyin

The University of al-Qarawiyyin features in the Guinness World Records as the oldest existing higher educational institution still in operation. Founded in 859, by immigrants from Tunisia, the associated madrasa became the ancient Muslim world’s leading spiritual and educational center. The mosque at Al Quaraoiyine was continuously expanded by successive dynasties until it became one of the largest in Africa. Originally about 30 meters long, the mosque was later expanded to 3,000 square meters in 1135 by Sultan Ali Ibn Yusuf. The mosque is not open to non-Muslims but the courtyard is visible from the main door on Derb Boutouil.

The grounds of the Royal Palace cover an extensive 80 hectares but are not open to the public. However, the restored gate with its imposing brass doors surrounded by zellige and carved cedar wood is worth a visit. The current gate was built over the ruins of the old gate.

The Jewish quarter (mellah) which is located in Fez el Jdid close to the King’s Palace was founded in the 14th century. At that time there were about 250,000 Jews in Fez but today very few people from the community remain. A sea of white tombs stands out prominently at the southwest corner of the mellah. One of the oldest tombs dates back to 1600 and is located high up against the north wall. The tombs of the rabbis are different from the others in the area. Also noteworthy is the large tomb of the martyr Solica who had her through slit because she refused to convert to Islam or accept the advances of the governor of Tangier. There is also a restored synagogue a the site.

About a one and a half-hour drive from Fez is another UNESCO World Heritage Site, that of the ancient Roman city of Volubilis, commonly considered as the ancient capital of Mauretania. Around 285 AD the city fell to local tribes and was never reclaimed by Rome because of its remoteness. The city was inhabited for about 700 years after but was abandoned in the 11th century when the seat of power was relocated to Fes. Many of the ancient ruins were destroyed by an earthquake in the mid-18th century but whatever remains is still quite marvelous.

The fortress of Cherarda is located along the walls of the old city on the outskirts of Fes el Bali. The area was initially referred to as the Thursday Fort because of the weekly Thursday market that was held outside the wall. Kasbah Cherarda was established in the 16th century by the Saadi dynasty and later converted into a fortress during 1664-1672. The fortress was occupied by several tribes but one of the more prominent tribes to occupy it was the Ashrafah tribe during the war between the Sultan and his brother.

About 21km northwest of Fez is the spa town of Moulay Yacoub renowned for its warm curative waters. The Turkish baths located in the center of the town are a novel experience and nothing like the high-end spas in Turkey. Here you will get the local treatment of being rubbed, scrubbed and then doused in the curative spa waters. Water is pumped to the baths from 1500m below the ground and can reach temperatures of 54 degrees Celcius.