Top 12 Things To Do In Galway 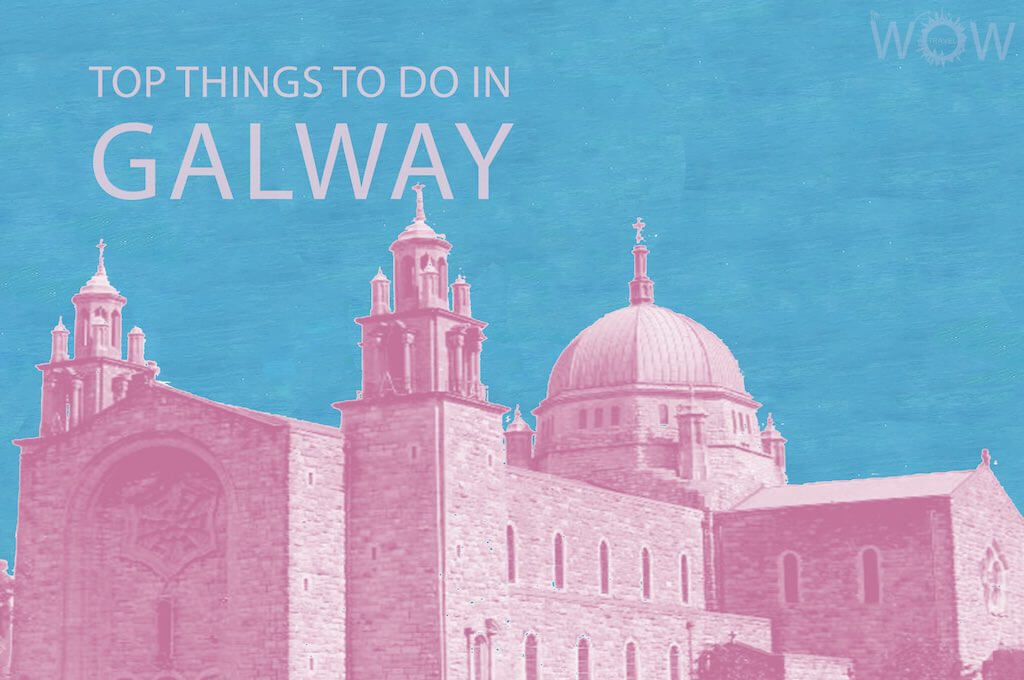 The medieval city of Galway (Gailimh) lies along the banks of the River Corrib in Western Ireland. The historic city is set to be the European Capital of Culture in 2020 along with Rijeka in Croatia. Galway was once ruled by fourteen merchant families referred to as the tribes of Galway, hence the city has also earned the sobriquet of ‘City of the Tribes.” There is a lot to see and do in this vibrant city which has a big art and music scene. From the pulsating nightlife and fun festivals to the breathtaking scenes of the Aran Islands and Connemara, your time spent at Galway is sure to be a memorable one.
[booking_product_helper shortname=”galway”]

The Cathedral of Our Lady Assumed into Heaven and St. Nicholas commonly called Galway Cathedral is one of the most impressive landmarks of the city. Completed in 1965 on the site of the old city prison, the cathedral is the last great stone cathedral built in Europe. It is a beautiful blend of architectural styles with Renaissance, Romanesque and Gothic features. The cathedral has a superb collection of art and beautiful rose windows.

The historic Eyre Square also referred to as John F. Kennedy Memorial Park is one of the most popular spots in Galway and has been that way since the medieval times. The plot of land that was transformed into Eyre Square was officially presented to the city in 1710 by Mayor Edward Eyre. There are several iconic installations which are representative of important eras of Irish history. The rust-colored fountain which stands out prominently represents the traditional sailing vessels of the area.

Close to the center of Galway city where the River Corrib meets Galway Bay, you’ll find the former fishing village, Claddagh. Located just outside the city walls across the river from the Spanish Arch, the fishing village used to be the oldest fishing village in Ireland, ruled by an elected king. The original village of thatched cottages was replaced by a council housing scheme in the 1930s. The famous Claddagh ring with two clasped hands holding a crowned heart was said to have originated in Claddagh.

If you’re an avid angler you’ll probably enjoy a stopover at this small museum housed in a unique tri-level building on the banks of the Corrib. The tower which was built in 1853  as a watchtower to keep track of the fishing stock, now showcases the city’s boating and fishing history.

Connemara National Park is one of Ireland’s six national parks, noted for its diversity of birdlife. The park was opened to the public in 1980 and has since attracted numerous visitors. The 2,957 hectares of the park features mountains, grasslands, bogs, heaths, and forests. The purple moor grass that grows in abundance creates a beautiful landscape. The entrance to the park is on the Clifden side of Letterfrack about a one and a half-hour drive away from Galway.

One of the county’s most picturesque sites is the Benedictine monastery founded in 1920, on the grounds of Kylemore Castle. The castle was built in 1868 as a private home for a wealthy doctor from London, Mitchell Henry. The expansive property had 33 bedrooms, 4 sitting rooms, a ballroom, and several other rooms. It also housed a Gothic church and family mausoleum. The castle and lands were purchased by Benedictine Nuns after they fled from Ypres in Belgium during World War I. The large Victorian Gardens and the ground floor of the Estate are open to the public for tours and nature walks.

This barren yet magical place located in northwestern County Clare has some impressive glaciated karst landscape. Formed over thousands of years from a thick succession of sedimentary rocks, the Burren extends over a fairly large area. It’s hard to imagine that the area was once covered by a mixture of deciduous trees, but large scale deforestation during the Neolithic period resulted in a total transformation. Megalithic sites like the Poulnabrone dolmen and the court tombs at Teergonean are evidence of the early settlement in the area. The Burren area has about 70 megalithic tombs.

Lough Corrib or Loch Coirib is the largest lake within the Republic of Ireland, covering an extensive area of 176 square kilometers. There are more than 1300 islands on the lake which feature forest walkways, secluded beaches, and good swimming opportunities. The largest of the islands is Inchagoil Island which offers some excellent views of the Connemara mountains, Joyce Country and the Maumturk range. There is also evidence of an early settlement on the island. The lake was featured in the writings of Oscar Wildes’ father, William Wilde.

This 16th-century tower house on the southeastern shore of Galway Bay near Kinvara is quite a majestic sight. The 23m tall tower along with its thick defensive wall has been restored and is open to the public. The castle was said to have been built by the O hEidhin clan chiefs. Dunguaire Castle featured in the Walt Disney movie Guns in Heather and also in the 1979 film North Sea Hijack.

If you’re in Galway for a few days then you should definitely set aside a day to visit this beautiful site. About a one and a half-hour drive from Galway at the southwestern edge of the Burren region in County Clare, you’ll find this magnificent sight. The picturesque cliffs which run for about 14km are one of the most visited sites in Ireland. No surprises there, as the breathtakingly beautiful sight, is an experience not to be missed. There are full-day organized tours from Galway to the cliffs which take visitors through charming villages on the way to the site.

This tiny lakeside spot renowned for the Ashford Castle Estate is off the tourist map but its definitely worth a visit. Located at the border with the neighboring County Mayo, the small village of Cong was once home to Oscar Wilde’s father. Besides the magnificent Ashford Castle which is now a five-star property, another key attraction here is the 12th-century abbey. Cong was the site for the 1951 film, The Quiet Man, and a museum detailing the set of the film is an interesting visit.

The seaside area of Salthill which lies within the townland of Lenaboy, to the north of Galway is a popular tourist destination. One of the highlights of a visit to Salthill is walking along the 2km long promenade locally know as the Prom. There are a number of bars and restaurants in this area and also some of the city’s best hotels that overlook the Galway Bay. For many years during Christmas, you’ll see many people following the rather strange tradition of jumping into the sea from the Blackrock Diving Tower.