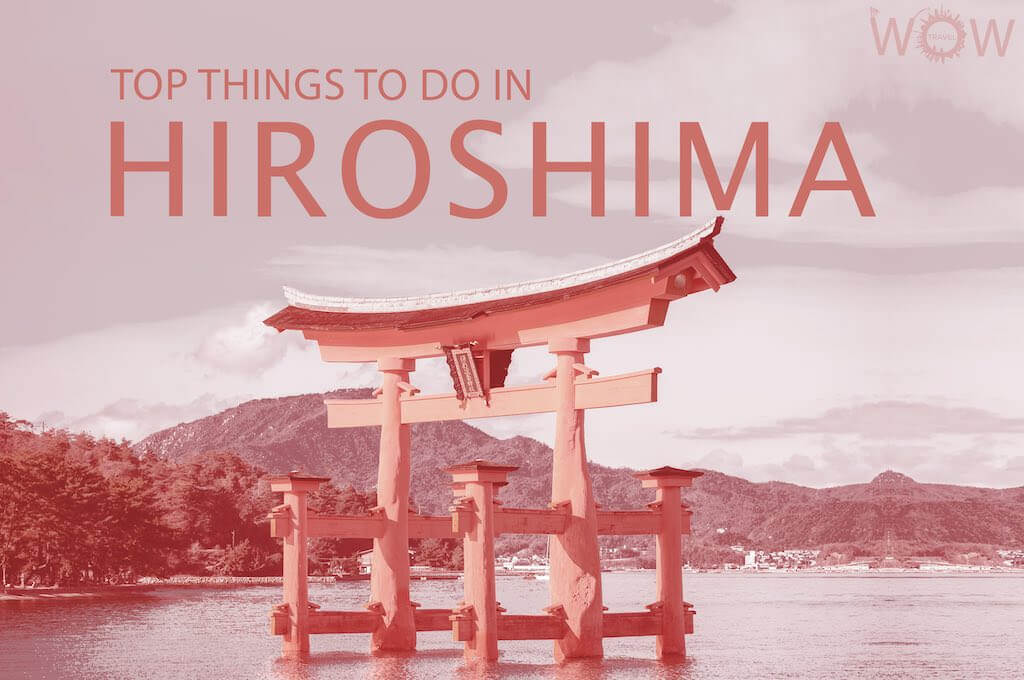 For most people, the name Hiroshima instantly conjures up the horrific events of 6 August 1945, when the city became the target of the world’s first atom bomb. Poignant reminders of that tragic time are visible in different parts of the city that has risen from the ashes like a phoenix. Today one can hardly believe that this thriving cosmopolitan city, the capital of the Hiroshima Prefecture in Japan, once bore the brunt of the world’s vengeance. From paying your respects at the memorials to soaking in the beauty of the parks and gardens, and indulging in some delicious food, there is a lot to see and do in and around the historic ‘City of Peace.’
[booking_product_helper shortname=”hiroshima”]

The iconic Genbaku Dome also referred to as the Atomic Bomb Dome stands as a grim reminder of one of Japan’s most tragic times in history. It is now a part of the Hiroshima Peace Memorial Park, serving as a memorial to those who tragically lost their lives. The UNESCO World Heritage building was completed in April 1915 and served as an exhibition hall until the 1945 bombing. After the blast, it was the only structure left standing near the hypocenter of the bomb.

This park located in the center of the city is another memorial to the victims of the atom bomb. The tree-lined Pond of Peace is the central feature of this park, ending at the cenotaph which has the names of all the known victims of the attack. At the pond, you will also find the eternal Flame of Peace which will only be put off when all the nuclear weapons of the world are destroyed. There is also a Children’s Peace Monument at the north of the road through the park. The park has many monuments and statues and plenty of benches to sit on and soak in the enormity of the tragedy.

The Peace Museum which was established in August 1955 has a collection of items that were recovered from the aftermath of the bombing. Grim photographs and personal memorabilia such as a melted lunchbox, ragged clothes and a watch that is frozen to 8.15am. The museum is divided into two sections, one that explains the history of the city before it was bombed and the aftermath of the bombing on the lives of the citizens and the other presents the advancement of weapons and the destructive power of nuclear weapons.

Any place in Japan is incomplete if it doesn’t have a garden, and some of the most beautiful manmade gardens are found in this part of the world. The Shukkeiein garden doesn’t disappoint. Built in 1620 for Asano Nagaakira, the domain lord, the garden recreates miniature grand vistas like valleys, mountains, and forests. Shukkeiein too was a victim of the bomb but much of its flora survived. You can enjoy wandering around this beautiful garden along a small pathway that takes you to various miniaturized landscapes.

One of the most popular attractions in Japan is the Shinto shrine on the island of Itsukushima (Miyajima) with its dramatic ‘floating’ gate. The shrine which is dedicated to three female deities was originally erected in 593 during the Suiko period. However, the present shrine is said to have been built by a prominent warlord, Taira no Kiyomori, when he was governor in 1168. It was deliberately built like a pier over the water in order to create the illusion of floating. At high tide, the gate is partially submerged and so is the shrine. This UNESCO World Heritage Site is also one of Japan’s National Treasures.

About a 2-hour drive away from Hiroshima city is this spectacular natural paradise. The surroundings change with the seasons, going from green in the spring to a riot of colors in the autumn. There are various footpaths and beautiful bridges which provide gorgeous sights. Erosion by the Taishaku River has created waterfalls, limestone caves, and cliffs in the area. The gorge is a part of the Hiba-Dogo-Taishaku Quasi-National Park. An ancient temple established in 709 is also located in the area.

The Hiroshima Castle also referred to as Carp Castle was originally built in 1589, by Mori Terumoto, before the city of Hiroshima came into existence. It was subsequently occupied by other feudal lords until the Meji Restoration when it became a military facility. On August 6, 1945, the castle too became a victim of the bomb but was rebuilt in 1958 to serve a museum of Hiroshima’s past before the World War. Visitors to the castle usually make a beeline for the tower to capture some of the amazing views.

This Kure Maritime Museum is more popularly known as the Yamato Museum because of the display of the large model ship Yamato, which was the flagship of the Japanese Combined Fleet in the Second World War.  The ship was sunk south of the island of Kyushu in 1945. The museum is located on the site of the battleship’s construction. There are other weapons on display too as well as a collection of suicide notes from Kaiten pilots. From the observation terrace on the 4th floor, visitors can avail of a good view of the area.

One of the most visited parks in the fall is Momijidani Park, located at the foot of Mount Mitsen on Miyajima island. It is renowned for its burst of color from the numerous maple trees that grow in its environs. The trees change with the seasons, from the cherry blossoms in the spring to multi hues in Autumn due to the 200 maple trees in the park.

The island of Miyajima is probably one of the most visited and photographed destinations in Japan because of the Itsukushima shrine. In the past, not many could visit the island as it was considered extremely sacred. While the shrine is the biggest draw on the island there are also other shrines and points worth visiting. The highest point on the island is Mount Misen which provides stunning views of the surrounding areas. You can either walk or take the ropeway to the top. Another site worth visiting is Senjokaku, a beautiful open structure with stunning views.

If you’re an automobile fan, then this place will definitely interest you. The Mazda Motor Corporation was founded in 1920 in Hiroshima and has since then contributed greatly to the country’s automobile sector. At the museum, visitors get an overview of the company’s history and also its plans for the future. The tour also gives visitors a chance to view an actual assembly line where a variety of car models are produced. Reservations need to be made in an advance to be able to visit the museum.

This historic Japanese temple hidden in a forest on the slopes of Mount Mitaki was founded in 809 during the Daido era. Its name is derived from the three waterfalls within its grounds. The temple which is dedicated to the Goddess of Mercy has a striking two-storeyed pagoda at its entrance. The pagoda was moved in 1951 to Hiroshima from Wakayama to provide comfort to the souls of the victims of the bomb. A small tea house is located in the vicinity of the temple where you can enjoy a simple traditional Japanese meal.