Top 12 Things To Do In Modena 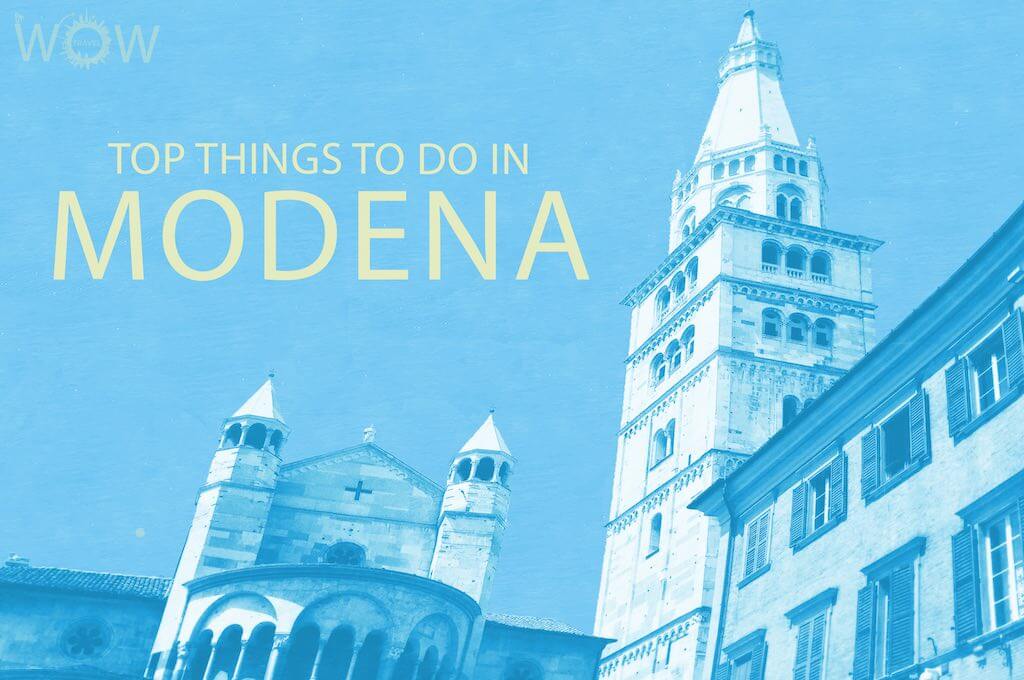 The ancient city of Modena on the south side of the Po Valley in northern Italy is a ‘foodie haven.’ The birthplace of balsamic vinegar and the creative force behind the giant tortellini, the backstreets of the city have little known restaurants which serve up gastronomic delights. Modena is also home to the ‘best restaurant in the world.’ Besides the delicious culinary offerings, the city is also renowned for its legacy of cars; being the birthplace of Enzo Ferrari. Modena’s rich history is visible in the beautiful buildings that occupy a prime place in the city, some of them listed as UNESCO World Heritage Sites.
[booking_product_helper shortname=”modena”]

The imposing Romanesque basilica, a UNESCO World Heritage Site, stands out as one of the finest churches of this style in Italy. Dedicated to St Geminaus, the patron saint of the city, the church was consecrated in 1184. Although the church may not be as large or as lavishly decorated as the other churches in Italy, what makes it remarkable is the beautiful carvings on its interior and exterior. A majestic Gothic rose window (added to the church in the 13th century), dominates the interior of the church, bathing the grand central apse with rays of light. Scenes from Genesis are depicted by a series of reliefs on the exterior facade. Another highlight of the interior is the 13th-century sculpture of the Passion on the choir screen.

The Enzo Ferrari Museum near the railway station is a tribute to the founder of the iconic brand, unlike the Ferrari Museum which focuses on supersonic cars. Memorabilia is housed in two separate houses, the house where Enzo was born, and a new ‘flashy’ Modena yellow building which is a showroom. There are plenty of Ferraris to gape at in the gigantic showroom where vehicles and themes change annually. At the house, you’ll find the Museum of Engines and also a workshop that belonged to Enzo’s father.

At the northeast end of the historic center is the Ducale Palace, a masterpiece of the baroque style. Built in the 17th century, the palace was the seat of the Este court for almost two centuries. It currently houses the Military Academy of Modena but is open on weekends for guided tours. Places of interest inside include a fascinating military museum, the Salon of Honor with a spectacular frescoed ceiling and the Golden Study. The gilded panels on the walls of the study can be removed in segments. These were hidden away from the Nazis and Napoleonic troops.

If you’ve ever been a fan of collectible cards and Panini football stickers, this museum is for you! The creator of the collectible cards, Giuseppe Panini was a huge collector himself. His passion for collecting prints from all over the world expanded to such an extent that it became a part of the company’s museum in 1986. His collection was donated to the Municipality of Modena in 1992 and is one of the most important collections in the world. The museum has been divided into various sections which tell the whole story of collectible cards and innovative techniques of production.

The imposing 87m tall bell tower that rises behind the Cathedral of Modena dominates the Modena skyline. Completed in the early 13th century, it was initially set up on five floors to compete with the towers of Bologna. Two ‘ghirlande’ (marble balustrades) embellish the spire of the tower, hence the name. The five bells of the tower were cast during the Renaissance period and were rung to announce the opening of the city gates and alert citizens during dangerous situations. The external wall of the tower is decorated with sculptures of imaginary animal and human figures from the medieval period. Visitors can climb to a certain level of the tower to take in the views of the city and also marvel at the interiors that make up the tower.

The 17th-century town hall of Modena has several historic rooms which are open to visitors to explore. Of note is the Fire Hall (Sala del Fuoco) which has a painted frieze that portrays characters from Ancient Rome against an Emilia background. Another symbol of note is the ‘stolen’ oaken bucket displayed in the Camerino dei Confimati pinched from Bologna as a symbol of the victorious Battle of Zappolino. A good idea is to plan your visit to the palace to coincide with tours of the palace’s balsamic vinegar making facility.

The oldest covered market of the town, Albinelli market is said to be among the most beautiful in Italy. The Art Nouveau styled market with a fountain in its center surmounted by a beautiful woman was inaugurated in 1931. Just a stone’s throw away from the Piazza Grande, you can indulge in some of the local gastronomic delights at the Albinelli market. From fresh produce to dairy and bakery items there is a wide variety to choose from.

On the outskirts of Modena is the Montale Archaeological Park, an open-air museum which showcases the Bronze Age villages of Terramare. These villages were fairly advanced for their times but disappeared around 1200 BC due to various factors. A part of the original village has been reconstructed with two large dwellings, a moat, defensive palisades, embankments, and a gateway. With the information gathered from the excavations of the site, the dwellings are also furnished with perfect copies of original household items.

This art gallery located on the top floor of the Museum Palace is centered around the private collection of the Este family, rulers of Modena from 1289 to 1796. Northern Italian paintings from late medieval times to the 18th century which were part of the family’s collection are showcased here. Sixteen exhibition rooms with four large salons make up the gallery which has been housed in the Palace of Museums since 1884. An object which stands out at the gallery is the Estense Harp, a rare musical instrument that was handcrafted by five Ferrarese and Flemish artists.

The Monastery and Church dedicated to Saint Peter is one of the city’s most important relics of the Renaissance. The Benedictine Abbey was founded in 983 but the adjacent church was reconstructed between 1475 and 1518. The central nave of the church is flanked by six large terracotta statues that were sculpted by the ‘Michelangelo of Terracota,’ Antonio Begarelli. The original altar of the church also created by Begarelli was moved slightly after his death in 1565 to accommodate his tomb. The massive sixteenth-century organ features fresco-adorned doors that were created by Pellegrino Aretusi.

About a 20-minute drive from the center of Modena is the Panini Motor Museum, housed in a barn on a farm belonging to the Panini family. This private collection has one of the finest vintage collections of Maserati; some which are limited editions like the A6GCS Berlinetta Pininfarina, of which only 4 were made and the 6CM from 1936. Besides the Maseratis, there is also an assortment of vintage motorcycles and a few tractors on display. One of the best things about viewing this collection is that there is no fee.

One of the largest synagogues in all of Italy is the beautiful synagogue in Modena which dates back to 1873. The bright and ornate interior of the building has a domed ceiling which is painted a vibrant blue. It has a sprinkling of golden stars throughout, which symbolizes the commandment in the Torah to go forth and multiply. During the fascist regime of Mussolini, the synagogue was shuttered but remained unharmed. It provides a rare glimpse into Jewish life in Europe before the horrors of the Second World War. Visitors can only visit the interiors by prior appointment only.