Top 12 Things To Do In San Sebastian 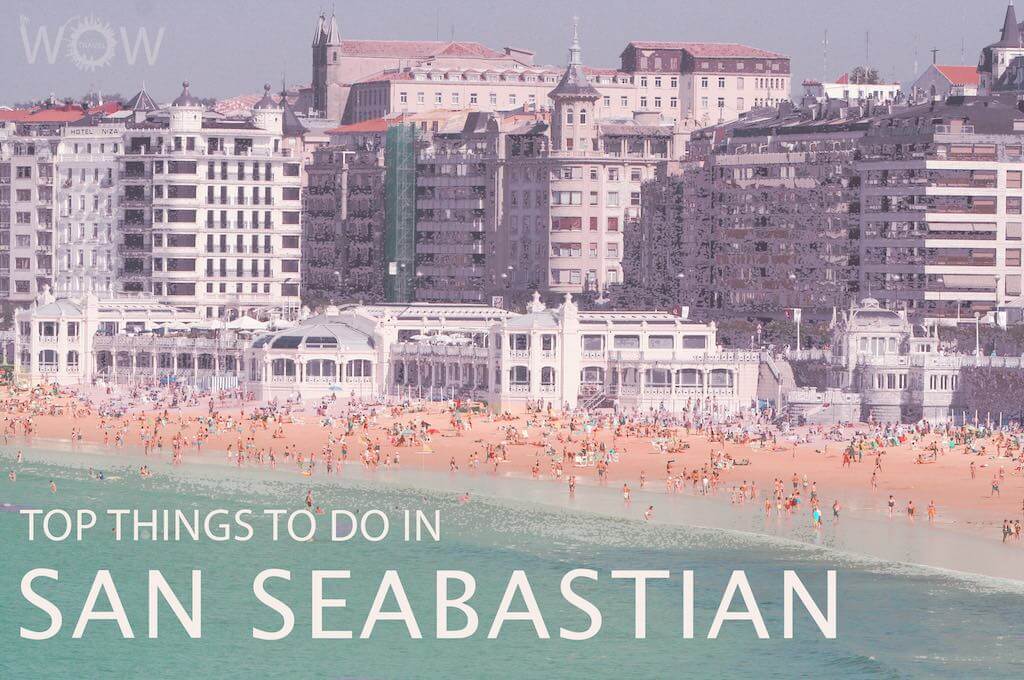 The elegant city of San Sebastian or Donostia (Basque) is one of Spain‘s most sought after beach resorts. Located on the coast of the Bay of Biscay, the beautiful beaches coupled with the lovely sunny weather attract people from all over. A stroll through the Old Town (Parte Vieja), a lazy day at the beach, or a ride in the old funicular to the top of Mount Igueldo are just some of the many things you can do in this beautiful part of the world. The city is also a foodie haven with a number of top-notch restaurants serving up culinary delights.  Although the city is not very big, an important event the San Sebastian International Film Festival is held here annually. In 2016, the city received the honor of being the European Capital of Culture along with Wroclaw in Poland.

This masterpiece of architecture is one of the prominent landmarks of San Sebastian, located between La Concha Beach and Parte Vieja. The Ayuntamiento de San Sebastián or City Hall was built near the Nautical Royal Club in 1887 to house the main casino. However, a ban on gambling in 1924 led to the closure of the casino. The city council has been housed in this building since January 20, 1945, after the renovation of the original casino. The building was one of the chief targets during the Spanish Civil War and evidence of this is seen in the bullet holes still visible in the facade.

This Historical National Interest Site is one of the most idyllic spots in the city. The 30-meter-wide island of Santa Clara can be accessed via ferry during summertime between May and August. It is an ideal day trip to the isolated island which offers a combination of the tranquility of nature with modern amenities. There are a few restaurants, cafes and picnic areas on the island as well as a post office. The small beach has a lifeguard so one can take a dip in the beautiful waters without fear. You can be sure that you’ll be whipping out your cameras as you stroll up to the lighthouse because the views are stunning.

The historic Parte Vieja or the Old Town of San Sebastian should definitely be on your itinerary as there is much to see and do here. The traditional core area of the city was once surrounded by walls that were demolished to occupy the land that connected the town to the mainland. The Santa Maria and San Vicente church once divided the Old Town at one time with parishioners from the former being referred to as ‘joxemartarrak’ and those from the latter as ‘koxkeroak’. The San Vincente is the oldest church in San Sebastian. The area is very popular in the evenings when visitors and locals converge on the area. A stroll down the cobbled streets will acquaint you with the numerous pintxo bars that make up this part of the city.

The wide shoreline of the expansive Playa de la Concha which extends for more than a kilometer is often referred to as the most beautiful urban beach in Europe. Overlooking the cityscape of San Sebastian, the beach which is known as La Perla is one of the most iconic sights of the city. The beach is extremely popular with visitors and locals as the waters are calm and safe for swimming. For those not interested in getting into the water, the promenade, Paseo de la Concha with its elegant railing and street lamps is an ideal place for a stroll.

The English Tudor styled palace built in the late 19th century was designed as a summer holiday home for the Royal Family of Spain. It was the favored destination of many of the Spanish queens.  The palace is surrounded by beautiful gardens and sits on a prime spot of land overlooking La Concha Bay. The gardens were opened to the public in 1972 but the public is rarely allowed to explore the building.

At the western end of La Concha Bay you’ll come across this interesting work of art by Eduardo Chillida. Three sculptures made up of monumental steel structures make up The Comb of the Wind which is embedded in natural rocks. The sculptures were arranged by Basque architect Luis Pena Ganchegui in 1976. There is a viewing area for visitors that have wave-driven outlets for air and water.

The Constitution Square is the heartbeat of the Old Town as it is the main square in the city where celebrations are held. The square was constructed in 1817 as the site for the bullfights. Spectators would watch the bullfights from the buildings that surround the square. The buildings of the houses that face the square have numbers marked on the windows which used to be the bullring boxes. The bullfights were later moved to a new location but the numbers on the windows have remained. Today there are a number of shops and terraced bars lining the square.

The 123-meter hill of Monte Urgull is located at the heart of San Sebastian. It was once the main defense point of the city and the ruins of the defense wall are still visible. Urgull lost its military interest when San Sebastian became a tourist hotspot and was sold to the city council in 1924. The Mota Castle is located at the top of the mountain with ramparts that date back to the 12th century. A 12-meter high statue Cristo de la Mota (The statue of Sacred Heart) was added to the top in 1950. Hiking to the top of Monte Urgull is highly recommended but if walking uphill is not your preferred activity you could walk along the scenic promenade of Paseo Nuevo which encircles the entire Monte Urgull.

The Museo de San Telmo which was inaugurated in 1902 is the oldest museum in the Basque Country. Located at the foot of Mount Urgull, the museum is renowned for its vast collection of art, paintings, and artifacts which date from prehistoric times to modernity. The museum is housed in a 16th-century Rennaissance-era building of what was once a Dominican convent. Admission to the museum is free on Tuesdays.

The Cathedral of the Good Shepherd is the largest church in San Sebastian. The Neo-Gothic cathedral was completed in 1897 in the New Town. The 75-meter high tower of the church is visible for miles around, marking it out as a prominent landmark of the city. The immense structure of the cathedral is quite astounding, especially the spacious interior. There are three naves and a transept with beautiful stained glass windows in the sanctuary. The huge organ comprising 10,000 whistles is one of the biggest in Europe.

For a stunning panorama of San Sebastian’s mountains and coastlines, head to Monte Igueldo, located to the west of the town. The top of the mount is accessed via a funicular ride in the antique funicular railway, operational since 1912. An old fashioned amusement park, Parque de Atracciones de Monte Igueldo is a popular spot for visitors. The observatory with an outlook tower dating back to the 16th century is another attraction at the top of the mount. One can avail of some fantastic views from this lookout point.

The San Sebastian Aquarium is located at the end of the Bahia de la Concha. The aquarium is a popular destination for locals and visitors with its collection of fish. There is also an Oceanographic Museum displaying ship models, documents and navigational instruments.  The Oceanarium is one of the main attractions of the museum with the underwater exhibition space. You can see fish swimming all around you as you enter the walkway of the tunnel.