Top 12 Things To Do In Vanuatu 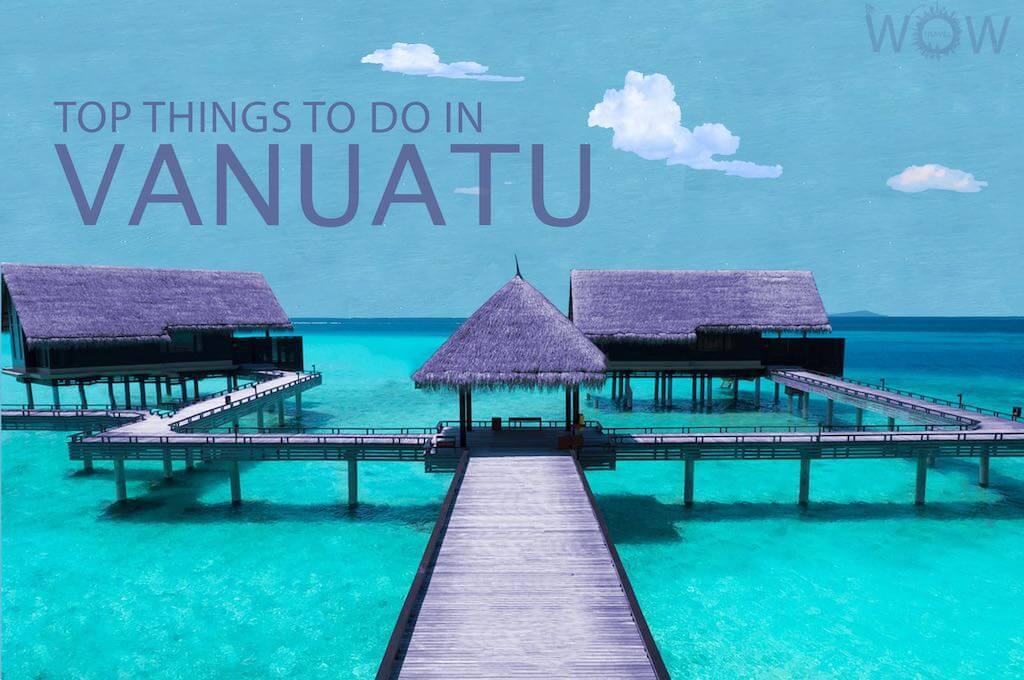 The Pacific archipelago of Vanuatu, consisting of about 82 islands, is located 1,750km east of northern Australia and was once known as the New Hebrides. Famous British explorer Captain Cook had christened the island with this name, which stuck until the country became independent. The first Europeans to visit the islands were the Portuguese and Spanish in the early 17th century when the monarchies were unified. Towards the end of the 19th century, England and France claimed parts of the archipelago and reached an understanding to jointly manage the area. The country eventually became independent in 1980 and the Republic of Vanuatu was founded. Vanuatu is a popular destination for scuba divers but its pristine beaches and beautiful rugged islands are still relatively untouched by hordes of tourists descending down on it. The natural beauty of the country mingled with its ancient traditions and customs is definitely worth exploring.

Espiritu Santo, the largest island in the archipelago is one of the main tourist hubs of the country and the stopover point for many cruise ships. The town of Luganville on the southeast coast is the only true town on the island and attracts locals and visitors. The island is renowned for some excellent sites for water-based activities like scuba diving, snorkeling, and kayaking. Some of the best beaches are also located on the island. On the western side of the island are many caves worth exploring; the Millenium Cave is one of the most famous in the area. Another key attraction of Santo is the ‘Blue Holes’ spread throughout the region.

One of the best things to do in Santo is to visit a blue hole from Luganville. These large karst-formation springs filled with stunning shades of blue water can be from 3 to 30 meters deep. People enjoy swimming, snorkeling or leaping into the water from overhanging trees and vines. There are quite a few in the region to choose from, but the two most popular are the Nanda Blue Hole (Jackie’s) and Matevulu. The beautiful crystal clear blue waters of the Nanda Blue Hole surrounded by natural vegetation create quite a contrast, making this spot one of the most photographed places on the island. The Matevulu Blue Hole has one of the most impressive swings, access to which involves climbing a banyan tree.

The beautiful Mele Cascades located 10 km from Port Vila is probably one of the most photographed locations in Vanuatu. These crystal clear aquamarine pools that terrace up the hillside, ending at a spectacular 35m waterfall can be accessed via a slippery path with guide ropes. The biggest waterfall flows into a natural plunge pool and you can choose to abseil down it. There are a few amenities at the entrance like changing rooms, a toilet and a café-bar with free wi-fi.

Located on the southwestern side of the island of Lelepa (famed for the opening sequence of US television show Survivor), is Fele’s cave a UNESCO World Heritage Site. The cave is renowned for the prehistoric rock drawings within it, some estimated to be about 3000 years old. Fele’s Cave is associated with the legend of Chief Roimata, a powerful Melanesian chief of the 14th century who was said to have been fatally poisoned by his brother in this cave during a great feast. Residents of Lelepa consider the cave to be ‘tapu.’ They believe that the soul of a person moves into the cave after death and their footprints are clearly visible at the entrance. Locals sweep the area after a death in the vicinity and look out for footprints the next morning.

You cannot visit Espiritu Santo without someone extolling the beauty of Champagne beach. The picture-perfect almost isolated beach with its pristine white sand and turquoise waters has made it to at least two lists of the world’s best beaches. The beach is so named because of the ‘fizz’ that appears over the water at low tide, which is caused by escaping gas from volcanic rocks. There is a fee if you want to enjoy the beach, probably one of the reasons why the beach remains isolated. However, if you’re staying the night at one of the accommodations in Towoc, the fee is waived.

If you want a true taste of the indigenous culture of the land, Tanna island is the place to experience it. The Melanesians that inhabit the island follow a more traditional lifestyle than the other islanders. Villages at the higher altitudes known as ‘kastom villages’ will make you feel like you’ve taken a walk back in time. Some of the islanders belong to what visitors like to call ‘cargo cults’ relating to the John Frum religious movement. These cults are groups of people or even whole villages who literally worship westerners. Other groups worship Prince Philip as a god. Tanna also has some beautiful secluded beaches as well as the world’s most accessible active volcano. The Blue Cave on the northwest coastline of the island is another attraction not to be missed.

Touted as one of the best things to do in Vanuatu, a trip to the beautiful Millennium Cave is definitely not for the faint-hearted or inexperienced hikers. Located about 15kms from Luganville, the hike to the 20m wide and 50m high cave takes about an hour and twenty minutes. The natural beauty of the cave with beautiful cascades through it and refreshing pools around it is a magnet for the adventurous.

Archaeological excavations have revealed that the area of the capital city, Port Vila has been inhabited by Melanesian people for thousands of years. Evidence of the rich historical background of the city can be seen opposite the Parliament where two traditional totem poles stand and also at the museum. Another remnant of the past, the Port Vila Post Office was the official line of demarcation between the British and French sectors of the city. Port Vila, which is located on the south coast of the island of Efate is the commercial and economic center of Vanuatu. The capital city is a pretty, uncluttered region set around a stunning natural harbor offering you fantastic views of the islands nearby. The city is fast becoming a melting pot of cultures which is reflected in the food.

One of the most well known and frequently visited volcanoes on the archipelago is Mount Yasur. Standing at 361m above sea level, the volcano which is located on Tanna island is regarded as one of the most accessible active volcanoes in the world. Depending on the activity level of the day, you can look into the crater and marvel at what goes on below the earth’s surface. The ‘dry’ volcano usually spews magma high up into the night sky. The journey to the volcano will leave you amazed as you marvel at the ever-changing landscape of the area.

The beautiful Francophone village of Port Olry is at the end of the sealed road on the northeast coast of Espiritu Santo Island. This little slice of paradise which is the biggest village in Santo is a good place to spend a few relaxed days. There are quite a few bungalows and treehouses along the seashore which accommodate tourists. The village provides you with some of the most stunning views and access to two local nature reserve islands. You can hire a canoe and paddle to the island nearby or go snorkeling around Bat Island. At low tide, you can also walk on the sandbar to get to one of the islands.

Another magical place in Vanuatu is the Blue Cave situated on the northwest coast at Tanna. It takes about 15 minutes by boat or a cheaper option would be taking a 4WD up the road and going down the ladder to the spot where the cave is. At low tide, it is a fairly easy swim to the cave under the rock ledge but can be a bit more challenging during high tide. However, the spectacular scene once you get to the inside will probably dispel any fears you might have had getting there. The large cave has a hole in the roof through which a shaft of sunlight lights up the area. You can also choose to snorkel or enjoy diving into the water from one of the platforms outside the cave.

Hideaway Island is a marine reserve park not too far from Mele Beach in Port Vila. The island is one of the capital’s favorite spots for snorkeling and diving. People enjoy the novelty of swimming and snorkeling to post a waterproof postcard from the special underwater post office located just meters from the beach.