Top 12 Things To Do In Lucerne 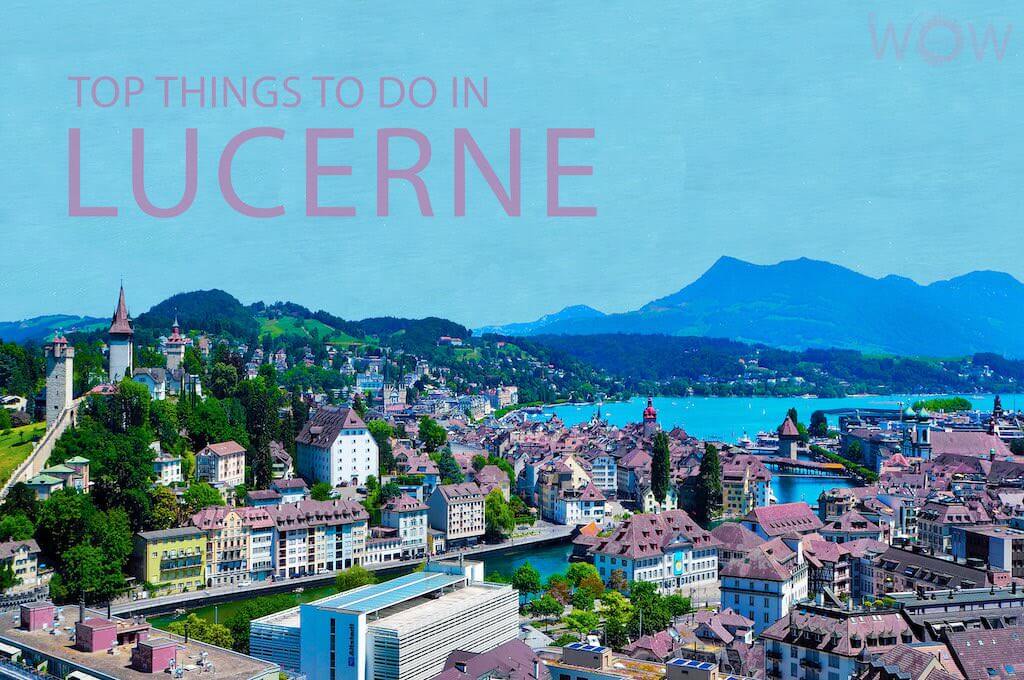 One of the most popular destinations in Switzerland is the little gem called Lucerne, located in Central Switzerland, at the foot of the Alps. This beautiful medieval city which began as a small fishing village is now the most populated town in Central Switzerland. Situated on the shores of Lake Lucerne and within sight of the beautiful mountains of Pilatus, Rigi, and the Swiss Alps, the scenic beauty of Lucerne attracts visitors in huge numbers. Besides the beautiful scenery and historic landmarks that make up Lucerne, another big draw is the music festivals that attract leading performances from around the world. Quite predictably, there is plenty to see and do in Lucerne. Most of the key attractions are easily accessible as they are within walking distance of the railway station.

This Baroque-style church was Switzerland’s first large church north of the Alps that was built in this style.  It was built for the Jesuits between 1666 and 1677 on the left bank of the River Reuss. Although the church was consecrated in 1677, part of the interiors was still incomplete. The high altar and side altars were erected four years later, while the onion topped towers were only completed in 1893.

The giant panoramic painting is a humanistic portrayal of one of the most defining moments of the Franco-Prussian War. The painting and sculpture portray the escape of 87,000 members of the defeated forces of General Charles-Denis Bourbaki as they cross into Switzerland at the end of the war. The circular painting is 112meters long and 10 meters high and is one of the last giant paintings of the 19th century; created by Edouard Castres who served as a Red Cross volunteer with the army. The 16 sided dome building and the painting were completed in 1889.

The picturesque Kapellbrucke is the city’s most prominent landmark and probably one of the most photographed locations in Switzerland. This covered wooden bridge which was built in 1333, runs diagonally across the Reuss. There are over 100 paintings from the 17th century, that hang from the rafters inside the bridge. These showcase scenes from important events in the town’s history and the patron saints of the region. A 34m high octagonal tower, which is a 13th-century fortification called the Wassertum stands proudly beside the bridge.

The trip up to the top of Mount Pilatus is an experience that should not be missed. The upper station on Pilatus Kulm sits at a height of 2,070 meters and offers some breathtaking scenery.  The top of the iconic mountain is accessible by an enthralling ride via the cog-railroad after a boat ride to Alpnachstad. This 30-minute ride will take you through beautiful alpine meadows and forests sometimes at gradients up to 48% till you reach the top. The descent is via the cableway. Alternately, you could go up the cableway from Kriens and down by the cog-railroad.

Many prominent landmarks of Lucerne are situated in the medieval Old Town, on the right bank of the Reuss. The bright colored timber-framed buildings which border the streets feel like they’re straight out of a fairy tale. Strolling through the Old Town is like a walk back in time. The Renaissance-style Altes Rathaus, the Old Town Hall built between 1602 and 1606 stands majestically beside the Jesuit Church. The oldest church in Lucerne, St. Peter’s chapel, which was originally built in 1178 is also located in the area.

This unique garden which is part of a museum complex, is a step back in time to the Ice Age where glacier potholes from 20,000 years ago are still visible. An ‘artificial glacier mill’ will give you a deeper insight into the process of formation of these potholes. There are also exhibits about the effects of climate change on the earth and a Stone of Time path that takes you to the observation tower. Also part of the museum but not connected to geology is the Mirror Maze which was created in 1896. The 90 mirrors that make up the place are a lot of fun for adults and children.

The old city wall of Lucerne dates back to 1386 and is a great vantage point for viewing the beautiful surroundings. Located along the north side of the Old Town part of the wall is still completely intact. There are also nine towers constructed along this fortification; four of which can be climbed. The oldest clock in Lucerne which was built in 1535 can be found in the Zytturm. It chimes the hour a minute before the rest of the city clocks.

To the south of Lake Lucerne is one of the highest peaks in Europe, Mount Titlis, which rises to a height of 3,238 meters. The summit can be accessed from the village of Engelberg on the north side via the world’s first rotating cable car. There are three stages to the summit of Klein Titlis and the last part of the cable car goes above the glacier. From an entrance within the cable-car station, you can also visit an illuminated glacier cave. Once you reach the top of the mountain, the added bonus is to walk across Europe’s highest elevation suspension bridge, the Titlis Cliff Walk, to capture some amazing pictures.

Another prominent landmark in Lucerne is the Church of St. Leodegar with its twin towers. The present church was rebuilt in parts between 1634-39 on the site of an 8th-century Benedictine monastery which burned down. It is quite evident that the Gothic towers which are part of the original church, have a different style from the later Renaissance-style church. The carved choir stalls are quite exceptional.

One of the most visited museums in Switzerland is the Vekehrshaus Museum or the Swiss Transport Museum, which opened in 1959. This extensive museum covers all forms of transports in its exhibition halls as well as outdoor exhibits. There is an entire exhibit explaining the construction of the St. Gotthard rail tunnel, a 3D film theater, and a 150-projector Planetarium. There’s also a map of Switzerland that you can walk on and view more closely through a lens.

The wretched figure of a dying lion, lying sculpted on the face of a rock ledge, just north of Löwenplatz is another popular site. Designed by Danish sculptor Bertel Thorvaldsen in 1820, the monument hewn on the rock face by Lukas Ahorn is a poignant reminder of a tragic event in Swiss history.  During the attack on the Tuileries in the French Revolution in 1792, 26 officers and over 700 troops of the Swiss Guards lost their lives while protecting King Louis XVI. The lion is a memorial to those brave hearts who met with such a tragic end.

The town of Lucerne sits at the end of this stunning water body also known as the ‘Lake of Four Cantons.’  Lake Lucerne is the fourth largest lake in the country with a complex shape, having four arms and several sharp bends. It drains its water into the River Reuss in Lucerne from its arm called the Luzernersee. The lake is a popular spot for local and international visitors as there are some of the 11 Best Hotels in Lucerne and resorts along its shores. You can explore the lake on any one of the boat trips that are available. The hour-long Lake Lucerne panoramic sighting cruise is quite popular for people who are interested in a short trip.