Top 11 Highest Dams In The World 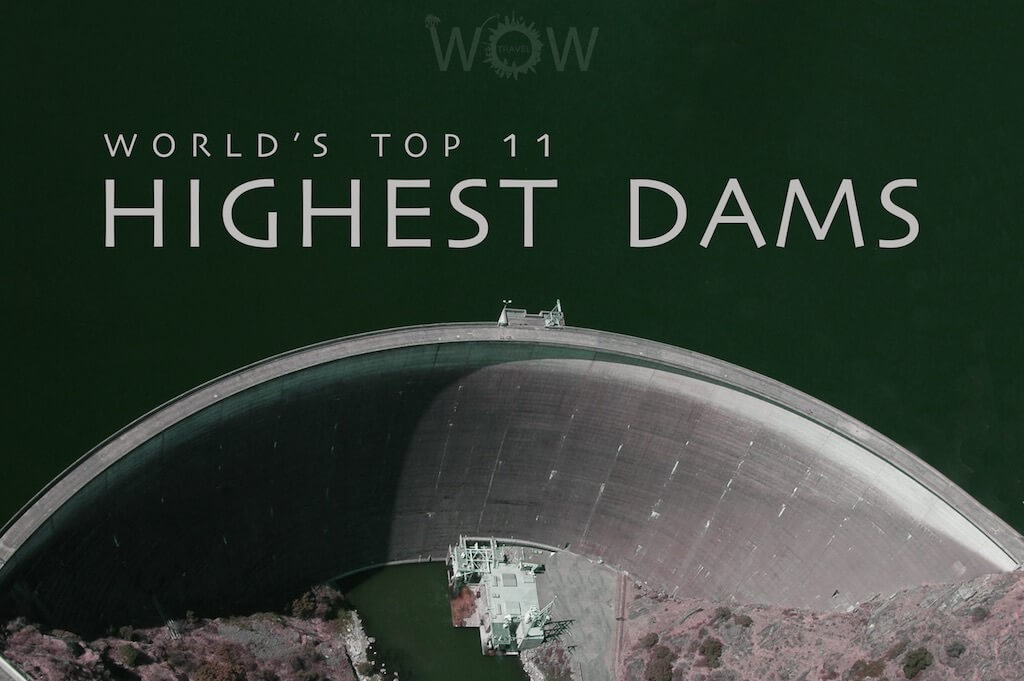 With massive walls that often reach hundreds of feet high and hold in place trillions of gallons of water, dams are among the biggest, heaviest and most impressive structures made by human hands in the world. When Hoover Dam was finished in 1935 it was the tallest dam in the world. Since then, larger, taller and more advanced facilities have been built. The tallest of them, The Jinping-I Dam, was opened only recently and it serves as a huge power station in China. WOW Travel made a lift of the highest dams in the world.

Mauvoisin Dam is a concrete arch dam across the Val de Bagnes on the Dranse de Bagnes stream, in the canton of Valais, Switzerland. Initial construction on the dam commenced in 1951 and was completed in 1957, with the reservoir filling by 1958. In 1991, the dam was raised to increase the capacity of the reservoir for winter storage. The dam’s primary purpose is hydroelectric power generation. Source: Wikipedia

Opened in 2006, the Tehri Dam is a multi-purpose rock and earth-fill embankment dam on the Bhagirathi River near Tehri in Uttarakhand, India. Tehri Dam is the primary dam of the Tehri Hydro Development Corporation Ltd., a major hydroelectric project centered near Tehri Town in the state of Uttarakhand in India.

This embankment dam serves diverse purposes of hydroelectric supply, navigation and flood control. Nuozhadu Hydropower Station is a key project in Power Transmission from West China to the East China since 2012.

Located over the Grijvala River in Mexico and feeds the largest hydroelectric plant in the country. The dam was built in a period of 6 years, from 1974 to 1980.

This dam was disused because of a disastrous landslide in 1963, which resulted in flooding of the dam and tremendous loss of life and property. Its 1963 over-topping was caused when the designers ignored the geological instability of Monte Toc on the southern side of the basin. Warning signs and negative appraisals during the early stages of filling were disregarded, and the attempt to complete the filling led to a landslide which created a seiche wave that brought massive flooding and destruction to the Piave valley below, wiping out several villages completely. The defect in the design of the dam resulted in this tragic incident, which took toll of nearly 2000 lives. Source: unp.me

The Grande Dixence Dam is a concrete gravity dam. lies over River Dixence at the head of the Val d’Hérens in the canton of Valais in Switzerland since 1964.

Located at the Jinsha River Valley on the boundary between Leibo County of Sichuan Province and Yongshan County of Yunnan Province, the Xiluodu Hydropower Project is a large-scale multi-purpose scheme that will bring benefits in silt detention, flood control and downstream navigation improvement in addition to its main function of power generation. With an installed capacity of 12.6GW, Xiluodu is one of the biggest hydroelectric projects being built anywhere on earth.

Xiaowan Dam is an arch dam on the Lancang River in China, its primary purpose is to provide hydroelectric power. The construction of this dam was completed between 2002 and 2010.

The Nurek Dam, the second tallest dam in the world, is an earth-fill embankment dam on the Vakhsh River in the central Asian nation of Tajikistan. Operating since 1972.

The Jinping-I Dam, the tallest dam in the world, is an arch dam on the “Jinping Bend” of the Yalong River in Liangshan, Sichuan, China. Construction on the project began in 2005 and was completed in 2013. its power station has a 3600 MW capacity to produce between 16 and 18 TW·h (billion kW·h) annually.