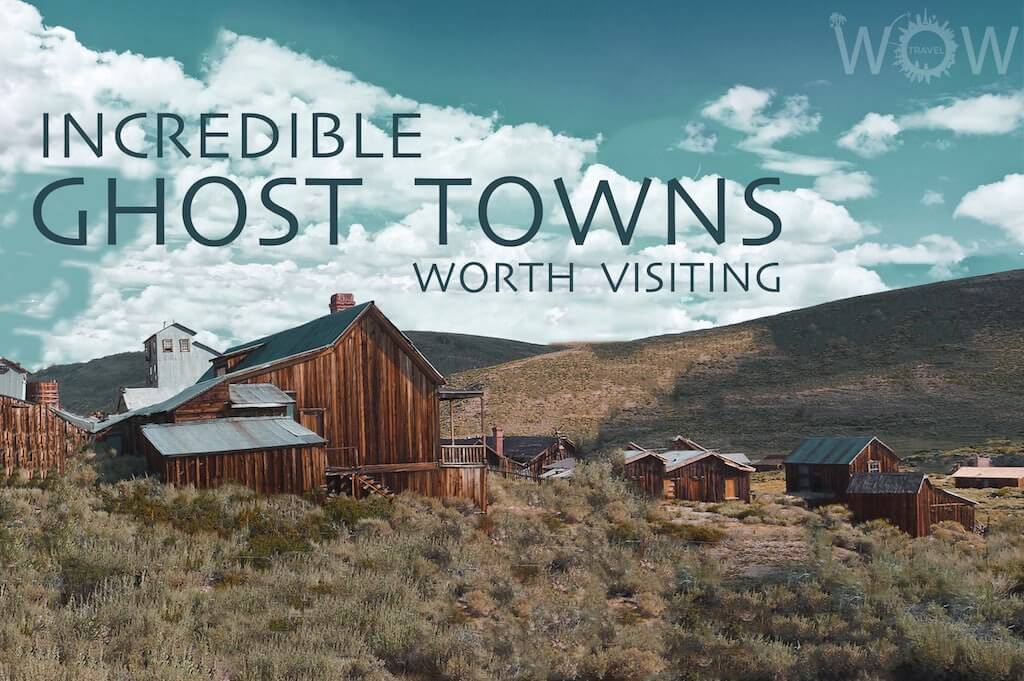 So, as it turns out, there is actually hundreds of ghost towns dotted around the globe, places that seem to have been forgotten by mankind and even time itself. Take a scroll down this collection of creepy, awe-inspiring 10 Incredible Ghost Towns Worth Visiting.

Before the division of Cyprus in 1974, Varosha – a resort in Famagusta – was booming. The rich and famous were drawn by some of the best beaches on the island. But in 1974, the town was invaded by Turkish troops and its population of 40,000 disappeared. Homes still have closets full of clothes, cabinets full of dishes, and there is even a car dealership still stocked with ‘brand new’ 1974 model-year cars. Dozens of hotels along the coastline sit empty with broken windows exposing fully-furnished rooms to the elements.

Built in 1878 in a heavily forested area, the town was first called Forrest City. As soon as the number of houses, hotels and stores warranted, the town was incorporated with a new name, Saint Elmo. Today it is one of the most preserved ghost towns in Colorado with numerous business structures and cabins.

Located in the eastern slopes of the Sierra, close to the Nevada border, Bodie is an original mining town from the late 1800’s. In 1880, the town had nearly 8000 residents. The discovery of several rich gold veins in 1876 started a rush to Bodie. At one point, there were 65 saloons at Bodie, a red light district and a Chinatown.

Pyramided is an archipelago situated between Norway and the North Pole, it can be reached by boat from about mid-May until the beginning of October when waters bordering the town are free from sea ice. This outpost in the high north looks much as it did when it was abandoned in 1998, providing visitors with a glimpse into Soviet-era life and culture. For safety reasons you have to stay close to the guide during your stay, the guide always carries a gun in case a polar bear should visit the ghost town.

Kolmanskop is Namibia‘s most famous ghost town, and is situated in the Sperrgebiet, (forbidden territory) a few kilometers inland from the port of Luderitz. In 1908, the railway worker Zacharias Lewala found a diamond in the sand, the news spread like wildfire, causing fortune hunters to converge in droves on Kolmanskop. The town is what remains of the diamond boom in the early 1900s and now abandoned. That climate is also why the town is so well-preserved. Though the arid desert sands have been creeping into every corner of the buildings, the lack of moisture means that organic material won’t decomposes as fast.

Situated on the South Coast of Dorset. This small village was abandoned during World War II and has been stuck in a time warp since. In 1943, a group of residents was ordered to leave their Dorset village after the government took it over for military training. They were promised their homes back at such time as the war ended, but in the event, they never got to live in their homes again. Now the little village lies in ruins except for the church and old schoolhouse that has been preserved as it was left all those years ago.

For nearly a century (from 1887 to 1974), the Kashima Island, also known as Gunkanjima (“Battleship”) Island, was a bustling coal mining facility that housed at its peak 5,259 people of workers, making it one of the most densely populated places in world history. When coal mining declined, operations at the facility ceased and the island was abandoned.

Mineral de Pozos was founded in 1576 to exploit the rich gold and silver mines nearby. During its most glorious period, there were 17 gold and silver mining haciendas, and up to one thousand men worked in each one every day. It has been a ghost town for almost a century, but it is experiencing a resurgence of interest on the part of visitors looking for a unique adventure.

Of all the ghost towns in Italy Balestrino is probably the most mysterious one. It is not  quite certain when the town was founded, nor exactly what happened and why it is was abandoned. However, one of the earth quakes that struck the region in 1887 coincides with a drop in population, so that may be a plausible explanation. Before the earthquake that the population amounted to 800-850 inhabitants, mainly farmers. In 1953 the town was completely abandoned due to ‘geological instabilility’. The remaining inhabitants (about 400) were moved to a safer area to the west of the original town. Since then what is left of Balestrino that has stood untouched, as if it had been frozen in time. Source: yourguidetoitaly

Chernobyl and Pripyat are two abandoned cities situated in northern Ukraine near the border with Belarus. On the 26th April 1986, it was largely abandoned following the disaster at the Chernobyl Nuclear Power Plant located a few km away. Chernobyl is now within the 30 km (18,6 miles) Exclusion Zone that surrounds the Nuclear Power Plant. Prior to its evacuation Chernobyl was inhabited by 16,000 people but is now populated only by Zone administrative personnel, some of those involved in decommissioning the power plants and a number of residents who refused to leave their homes or subsequently returned. Pripyat, less than 3 km (1.9 miles) away from the reactor, was constructed for the plant’s personnel. Once a beautiful town by Soviet standards, its 50,000 inhabitants were evacuated 36 hours after the accident. decades after the catastrophe, nature reclaims the town: trees grow through broken windows, and grass pushes up through the cracks in dormant roads that once were glorious promenades – but the town remains unfit for human habitation for hundreds of years to come.