15 Tree Tunnels You Have To Walk Through 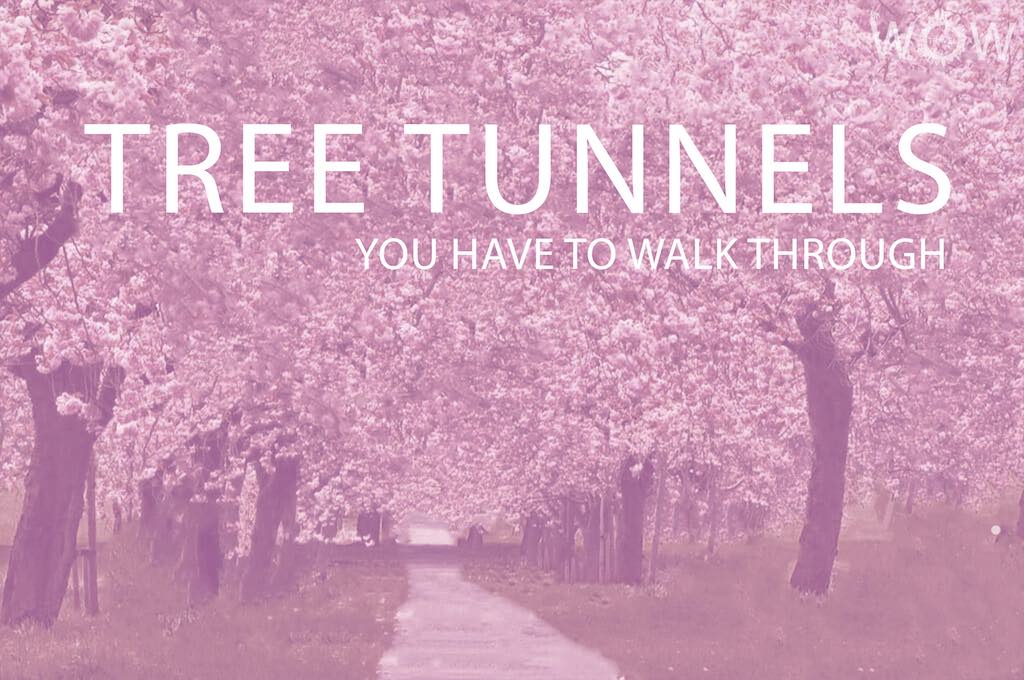 There’s something really romantic and comforting about streets and paths lined with trees, especially when their branches grow to the point where they arch over the road itself and meet in the middle to form a natural tunnel. Whether planted deliberately with a hope that the trees grow eventually into tunnel or trees that have taken off at will to form an incredible tunnel – it is impossible to argue that the beauty of tree tunnels is nothing short of spectacular. Enjoy the 15 Tree Tunnels You Have To Walk Through:

The Jacarandas Walk in South Africa is a well-known tourist destination with a tunnel that’s more than 100 years old. It represents one of the largest man-made forests in the world and is made up of 70000 trees, most of which were imported into the country. It’s best seen in October when the flowers are in full bloom.

In Japan is an amazing tunnel of cherry blossom trees or sakura. They create a magnificent tunnel of pink, the colors seeming to radiate off the light and onto everything in the tunnel. It looks like something straight out of a fairy tale.

The Stunning Tree Tunnel You Saw On ‘Game Of Thrones’ Is Real And Can Be Found In Northern Ireland.

Experience the seasonal beauty in the Street of Bonn, Germany where spring brings life to Nature. One would notice the beauty as flowers blossom and completely covers the whole street. It looks stunning and fills the hearts of anyone as they walk down the street covered with blossoming flowers. We recommend staying at one of the 11 Best Hotels in Bonn, Germany near this attraction.

Known as “The Mall” in Central Park, this beautiful walkway is perfect for an afternoon stroll, any season of the year. It runs from 66th to 72nd street and leads to the Bethesda Terrace. Bring a blanket and a good book!.

In the city of Kitakyushu Japan is the Kawachi Fuji Garden, which is home to around 150 Wisteria flowering plants.

Oak Alley along the Mississippi River outside New Orleans, Louisiana

Oak Alley is a historic plantation located outside of New Orleans, Louisiana. It’s named after one if its most popular features, the double rows of live oaks on the property. The tree-lined road is about 245 meters (800 ft) long, and it’s absolutely spectacular to walk along its canopied path.

Much of the tree cover in the South Downs area was razed thousands of years ago, but some thickly-wooded areas remain.

This railway engulfed in a tunnel of leaves is a Ukrainian hot spot for lovers. Although it’s undoubtedly romantic, there is an active train that travels through the tunnel three times a day to deliver wood to a factory.

Ginkgo Tree Tunnel is covered with Ginkgo Biloba trees. It is a highly revered tree of Japanese culture because this tree is known to survive long years. If you visit Japan, you will spot more than 65,000 Ginkgo trees growing on the streets, gardens or parks.

The Point Reyes seashore is the site of the historic Marconi wireless station – one of the earliest radio stations in the world and the only commercial Morse code stations still operational in the US. The rugged coast of Point Reyes is also home to a remarkable tunnel of cypress trees that date back o hundreds of years.

In Arashiyama, Japan there is a bamboo forest called Sagano. The 500 meters (1640 ft) long path runs through the most beautiful bamboo forest. The country has designated this long stretch of the bamboo forest as a historic site. The Agency for Cultural Affairs declared this place as the ‘place of scenic beauty’. Tall bamboo trees surround the road stunningly keeping the area cool. Famous temples and shrines are located very close to this bamboo tree tunnel. When the wind blows through this tree tunnel, a majestic sound is produced. It has already been voted as one of the 100 must-preserve sounds of Japan.

One of the famous flower that must be seen when spring in Korea is 벚꽃 or cherry blossom. The Jinhae Gunhangje Cherry Blossom Festival is South Korea’s largest cherry blossom festival. It takes place from April 1st – April 10th each year and attracts over a million tourists from around the country and globe.

This fun park sits in front of the Zarcero church and has been maintained by Evangelisto Blanco since the 1960s.