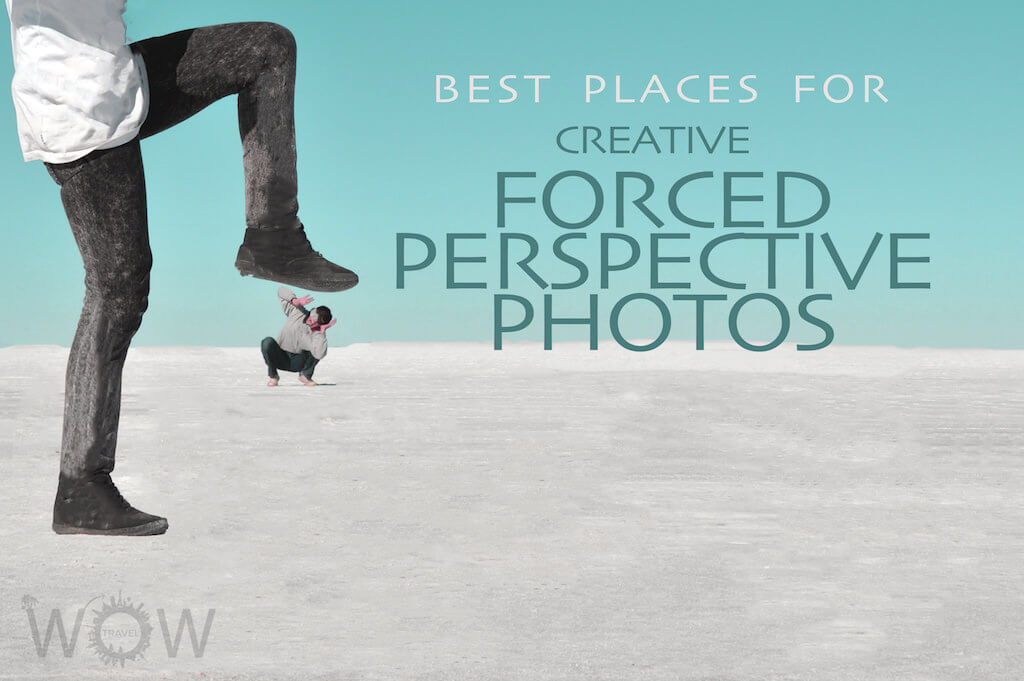 Whether we like it or not, our eyes can play tricks on us. Even if we know something is an illusion, it’s difficult not to be fooled. Forced Perspective photography is used to make us believe that certain objects are smaller or larger than they really are. It’s the manipulation of the human visual perception; some call it optical illusions. The technique can result in some really fun photos. From India to Bolivia, we made a list of the 7 Best Places For Creative Forced Perspective Photos.

The symbol of Paris and of France. The iron lattice tower, which continues to serve an important role in television and radio broadcasts, is considered an architectural wonder and attracts more visitors than any other paid tourist attraction in the world. The Eiffel Tower was originally built as the entrance arch for the World’s Fair in 1889 and it was the tallest man made structure in the world for 41 years before being surpassed by the Chrysler Building in New York. Millions of people climb the Eiffel Tower every year and you must do it as well.

Leaning Tower of Pisa is one of the most photographed places in Italy. It’s perhaps the most famous tower in the world, due to that tiny, imperceptible, construction’s problem. The tower was built to house the bells for the lovely cathedral and construction began in 1173. Almost immediately it began to lean, in fact the builders were only on the third floor when they started to notice something was wrong.

Standing majestically on the banks of River Yamuna, the Taj Mahal is an immense mausoleum of white marbles and synonymous to love and romance. It reigns supreme as one of the most recognizable and iconic images of India. Its delicate minarets, gracefully curved archways and ice cream scoop domes have led many to make the pilgrimage stand at its entrance and wonder at its grandeur.

The Ponte Vecchio is one of Florence’s landmarks and probably the most photographed bridge in the city. It’s distinguished as being the only remaining bridge to have houses and shops on it. In part this is because something important was built on top of those: the Vasari Corridor. This secret passageway built by Vasari for Duke Cosimo I de’ Medici in 1565 links the Palazzo Vecchio to the Pitti Palace.

The Great Pyramid of Giza, Egypt

Just a short distance from Cairo, the spectacular Great Pyramids of Giza are the only one of the Seven Wonders of the Ancient World still standing. The world’s oldest tourist attraction, the Pyramids and Sphinx of Giza remain the most visited site in Egypt, erected nearly 5000 years ago and contain millions of blocks of limestone.

The world’s highest and largest salt flats, Salar de Uyuni in Bolivia, is the best place for creative forced perspective photos and a worldly experience that has to be seen to be believed. It has an endless sheet of hexagonal tiles (created by the crystalline nature of the salt), dotted with pyramids of salt. Salar de Uyuni is blanched completely white and so flat that the variance in height from any single point to another is less than a meter. Every year, this incredible landscape is covered with a thin layer of water. When that happens, it turns into the largest mirror on the planet and the results are mesmerizing.