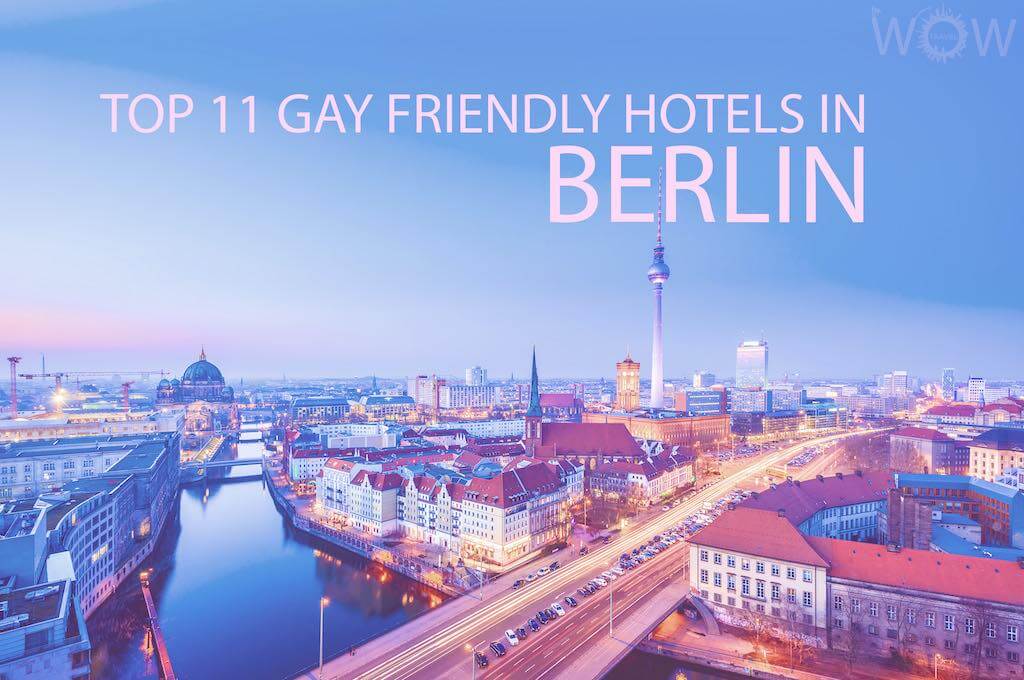 Berlin’s gay pride in July attracts a huge number of visitors to the city, but gay travelers don’t only congregate here during pride. The city is one of the most sought after gay destinations in the world for various other reasons and as such there are plenty of gay hotels in Berlin to cater to gay travelers. Whether you’re looking for the luxury of a five star or budget gay hostel in Berlin, this gay-friendly city has more than enough gay friendly hotels to suit your needs. While most gay travelers prefer to stay closer to Schöneberg, the gay area in Berlin, other places like Kreuzberg and Neukolln have fast become gay enclaves.

Berlin is often referred to as the Gayest City in Europe, although Madrid, Amsterdam, and Barcelona are not far behind. Its nightlife is quite legendary for kinky fetishes and eyepopping sexual displays and gay bars in Berlin are often overflowing with people. However, if you’re in the city to explore its sights and learn about its history, we recommend the Discover Berlin Walking Tour.

Part of the Berlin gay hotels by the Axel group, this hotel is located in Schöneberg, the gay area of Berlin. Its location in this area places it in close proximity to many gay bars. RedGold1 and WOOF cruise club are hardly a minute away, while the other popular gay bars in Berlin are within a 10-minute radius.

The Axel Hotel prides itself on being able to provide a ‘hetero-friendly’ urban experience. The rooms reflect Axel’s commitment to providing a good experience. Stylish and elegant rooms styled in gold, black and red textures exude luxury. All rooms are equipped with the amenities that one would look for in a good hotel. Flat-screen TVs, free wifi, a minibar, and a Casanova Kit by Axel are some of the amenities you can expect. The hotel also has a gym, a modern spa, a sauna, and a rooftop jacuzzi with a cocktail bar, a good alternative to the Top 11 Hotels With A Rooftop Pool In Berlin. The bar is a good place to hang out if you’re looking to meet new people as it’s quite popular. It’s a great place to base yourself while you explore all that the city has to offer.

Another hetero-friendly gay hotel in Schöneberg is the ArtHotel Connection, renowned for its friendly staff. The high point of staying at this hotel is that it is housed in the same building as two popular gay hotspots, Prinzknecht and Connection Club. This means that you don’t have to venture out very far to have a good time. However, if you’d still like to explore the other gay bars in Berlin, they’re about 15 minutes from here.

The hotel is based in the former residence of a wealthy Berliner and likes to refer to itself as the ‘Grande dame of Berlin’s gay hotels.’ The old art deco building has been recently renovated to provide a tastefully designed affordable gay accommodation. Each room is outfitted with modern amenities and the decor differs from each room. Besides the extremely helpful and friendly staff, another great thing about this hotel is that breakfast is served until mid-afternoon so you don’t have to worry about sleeping in.

This gay friendly hotel in Berlin that is part of the H10 chain is just a few steps away from the famous Kurfurstendamm street, the main commercial hub of west Berlin. If shopping is your thing, then you may enjoy shopping along this street with a personal stylist. If not, then the U-Bahn station is located just next door to the H10 Berlin Hotel so commuting to other parts of the city from here is fairly easy. Schöneberg the gay district in Berlin is about 15 minutes away.

The hotel’s contemporary design is a nod to the heritage building in which the hotel is based. You can expect stylish, airy rooms with all the modern comforts such as free wifi, automatic temperature control and a laptop safe. The rooms have large windows that bathe the room in natural light. A restaurant offering daily breakfast and a selection of international dishes is located within the hotel. There is also a gym and an on-site spa.

Although Lindemann’s Hotel is located in the Schöneberg district, it is at a short distance from the nightlife of the area. Which means that the hotel is at a quieter location. There’s a beautiful park nearby where you can enjoy a nice stroll. The gay bars are a 15-minute walk from the hotel but if you want to explore the other side of Berlin, there is an S-Bahn station just nearby.

This 3-star hotel is outfitted with stylish modern rooms which may not be big on luxurious extras but are good value for money. You can choose from a small room or the gorgeous Urban Rooftop room. With a private terrace and a freestanding bathtub, this room is one of the better options. A breakfast buffet is served every morning. The hotel also has a trendy lobby bar where you can enjoy a drink.

Mercure Hotel may be located on a quiet side street between the lively Schöneberg gay district and Charlottenburg district but that does not mean that it is far from the gay action. A couple of minutes away from this gay hotel in Berlin you’ll find many gay bars such as Blond, Toyboy, Pinnochio and TABASCO bar. If you’re interested in the major Berlin attractions, the Nollefendortz Platz U-Bahn station is also nearby. Alternatively, you could be a part of the Gay Berlin Tour to explore more of the Schöneberg gay area.

Don’t expect anything overly fancy from this hotel but it does have a reliable standard to make it a popular choice. Airconditioned non-smoking rooms are equipped with all the necessities including free wifi. We recommend the Superior rooms during the summer as the standard rooms do not have airconditioning. The hotel also has a bar that is open until one in the morning.
Check Rates & Book Now

This stylish and relatively new 3-star gay hotel in Berlin is located steps away from the gay clubs of the Friedrichshain-Kreuzberg area such as SilverFuture. It’s also close to the Ostbahnof train station and offers easy access to the central attractions in Berlin. You can also discover more about the area on the Typical Kreuzberg experience. Moxy Berlin welcomes you with a complimentary drink (alcoholic or soft drink). You can also enjoy a paid breakfast in the morning. The bar at the hotel is open throughout and snacks are also available 24/7.

The stylishly designed rooms are equipped with free high-speed wi-fi and a 42-inch flat-screen TV, plus comfortable beds. A floor to ceiling art wall gives the room that special touch. Moxy has other equally good properties in Glasgow, San Diego, and Warsaw.

As the name suggests, the Quentin Design Hotel is designed to be elegant yet simple. Located at the very heart of Berlin’s gay area, you can be sure that you’re just minutes away from the most happening gay bars in Berlin. Gay hotspots such as Mutschmanns and Hafen are less than five minutes away. Exploring the city from here is also easy as the Nollendorgplatz U-Bahn station is nearby.

Invigorating showers and comfortable beds are what you can expect at this hotel. The well maintained and clean rooms are suitably equipped with the necessary amenities and outfitted with hardwood floors and designer bathrooms. A gorgeous garden patio adds to the charm of staying at this gay friendly hotel. You can expect some great service here from the helpful, friendly staff.
Check Rates & Book Now

The second gay hotel in Berlin by the Axel group is also located in Schöneberg but in a quieter residential area of Berlin’s gay area. Most of the gay bars are about 20 minutes away but the U-Bahn station is a stone’s throw from the hotel door. Exploring the rest of Berlin becomes easy with easy access to public transport. Berlin’s other tourist attractions are a 10-minute drive from here.

TWO Hotel is also big on design just like its big brother. However, this hotel has more of a boutique feel to it with a classic decor. The bathrooms are great and the beds extra comfortable. A few suites have their own private terraces. The hotel which specifically caters to the LGBT community has a sauna, jacuzzi and massage treatments. It also has a gym. The staff at the hotel are well informed about gay Berlin so feel free to ask them for any information regarding gay spaces.
Check Rates & Book Now

Hotel Palace is primarily a 5-star business hotel but its proximity to most of the gay nightlife makes it an ideal choice for those looking out for some luxury. It’s just 10 to 15 minutes away from the gay nightlife of the gay district in Berlin. Berlin Zoo and Tiergarten are also quite closeby. The hotel, however, is well equipped with amenities if you’d rather stay in. With an extensive range of sauna facilities, an indoor heated pool with a jacuzzi, and a restaurant and Gin Bar, you may prefer to stay in during the day.

Large beautifully decorated rooms are what you can expect to find here. With all the modern amenities and comfortable beds, you can be sure that your stay here will be an enjoyable one. If you’d like to enjoy the Club Lounge benefits such as a complimentary light lunch and extended breakfast, we suggest booking a Club Room.
Check Rates & Book Now

Overlooking Berlin’s trendy and busy shopping street Kurfurstendamm, shopaholics will undoubtedly love the Sofitel Berlin‘s location. This gay hotel in Berlin, however, is not right in the midst of all the noise but nestled behind the boulevard so you can watch all the action but not get disturbed by it. Gay Schoneberg is a 15-minute walk away so a leisurely stroll will take you to hotspots like WOOF, and HarDie’s Kneipe amongst others. Berlin Zoo, the Theater des Westens, and Charlottenburg Palace are the other attractions that are nearby. A 3-minute walk will take you to the Kurfenstendamm Underground Station. If you’re up for a bit of fun during the day, we suggest exploring Ku’daam with Olivia Jones’ Drag Queen Tour with Gloria Glamour.

Sofitel’s design blends its classic French sophistication with the forward-thinking approach of Berlin to give you a space that is striking and tasteful. Chic Bauhaus furniture, original pieces by German artists, and beautiful decor enhance the Sofitel experience. High windows, dark wooden flooring, beautiful marble bathrooms and great views of the city add to the charm of the rooms. A lounge bar, restaurant, and breakfast room are some of the dining options. Other amenities include massage treatments, a sauna, ice fountain, steam room, and jet-powered foot baths.

A rather quirky gay friendly hotel in Berlin, the 25Hours Bikini Berlin has rooms that look straight into the Zoologischen Garten and the popular Kufurstendamm shopping street. The hotel prides itself on being ‘wild like the jungle and multifaceted like the city.’ In keeping with this theme, you’ll find a hammock lounge in the lobby and a jungle sauna on the 9th floor that overlooks the Tiergarten. The hotel’s bar the Monkey Bar located on the 10th floor offers panoramic views and is the perfect place for a sundowner. However, the bar will be undergoing renovation and will be closed for the first quarter of 2020.

Rooms in the hotel overlook the city and the zoo, so guests can choose between ‘urban’ or ‘jungle’ rooms. Some jungle rooms have a hammock that looks out onto the zoo. All rooms are equipped with the necessities that you would need for a comfortable stay.

Get Some Culture in Berlin: