The Most Interesting International Borders On Earth 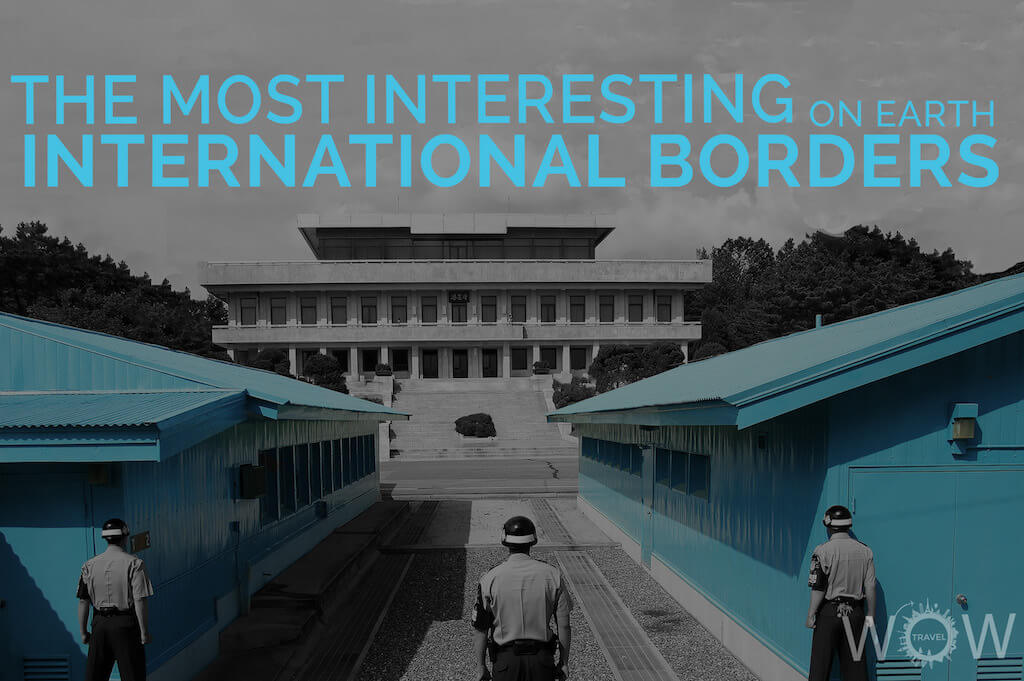 China shares its borders with 16 other countries, Russia with 14 but at the same time, Japan and Australia don’t have any neighbors. The way borders are drawn and what’s used to delineate them can be really fascinating. While borders seem like permanent fixtures they have revolved throughout time, reminding us that the only constant is change. Listed below are some of The Most Interesting International Borders On Earth. Spoiler alert! Some of these are also The 12 Longest Land Borders In The World.

Iguazu Falls are waterfalls of the Iguazu River on the border of the Argentina province of Misiones and the Brazilian state of Paraná. The Devil’s Throat (Garganta del Diablo in Spanish or Garganta do Diabo in Portuguese), a U-shaped, 82-meter-high (269 ft) , 150-meter-wide and 700-meter-long (490 by 2,300 feet) cataract, is the most impressive of all, marking the border between Argentina and Brazil. Two thirds of the falls are within Argentine territory. Iguazu Falls are unlike any other waterfall on earth.

The entrance to the famous St. Peter’s Square marks the border between Italy and the sovereign Catholic city-state of Vatican City but there are no border controls around the Vatican City. Vatican City is an independent city-state that covers just over 100 acres, making it 1/8 the size of New York’s Central Park.

Something fishy is going on at the Polish-Ukrainian border, it is for the annual Land Art Festival. This beautiful land art was made by Polish artist Jaroslaw Koziara as a part of the Land Art Festival on the field between Horodyszcze (Poland) and Warez (Ukraine). The giant fish was created by seeding different kinds of plants on the field between the Polish and Ukrainian border. Image by: polinst.kiev.ua

The forested border between the USA and Canada is referred to by locals as ‘the slash’. It is the longest continuous international border in the world.

Sixaola River separates Costa Rica and Panama, and the single-lane bridge over the River is a natural border between them.

The Belgian town of Baarle-Hertog and the Dutch town of Baarle-Nassau are part of one of the most complicated borders in the world. Remarkably, the Belgian town consists of 24 non-contiguous parcels of land. 21 of them are surrounded by the Netherlands while 3 are on the border between the two countries and thus share a jurisdictional boundary with the rest of Belgium. The border is so complicated that there are some houses that are divided between the two countries. There was a time when according to Dutch laws restaurants had to close earlier. For some restaurants on the border it meant that the clients simply had to change their tables to the Belgian side. Source: citylab.com / Wikipedia

The Diomede Islands are a pair of rocky islands located in the middle of the Bering Strait between mainland Alaska and Siberia. Though the two islands are only 3.8 km apart and clearly in a single group, they are separated by the International Date line which also marks the international border between Russia and the United States. Big Diomede is owned by Russia and Little Diomede is owned by the USA. Additionally, Big Diomede is 23 hours ahead of Little Diomede owing to the International Date Line that passes between them, because of this they are sometimes called Tomorrow Island and Yesterday Isle, respectively. Source: amusingplanet.com

This long border is the most frequently crossed border in the world with approximately 350 million legal crossings being made annually.

The point where the Iguazú and Paraná rivers converge is known as The Triple Frontier, connecting the three South American nations.

The line between North and South Korea is one of the most nerve-wracking borders on Earth. Although the Korean War is technically over for the U.S., the North and South are still very much at war — maintaining guard towers and thousands of troops facing each other, waiting for the next invasion. The buffer zone created by the 1953 Armistice between North and South is called the de-militarized zone (DMZ), although there’s a huge military presence. This border is filled with fencing, mines, and troops on both sides with itchy trigger fingers. Source: businessinsider.com

Locals in Macau drive on the left hand side of the road, while the rest of China drives on the right. Macau was a Portuguese colony for more than 400 years, and at the time it was handed back to China in 1999, it was the last European colony in Asia. Like Hong Kong, Macau still drives on the left under Chinese rule, which means travelers between Macau and other parts of China must switch sides of the road without even leaving the country! At the Lotus Bridge between Macau and Hengqin Island, cars on the Chinese side loop under the bridge on a weirdly asymmetric partial cloverleaf in order to switch lanes. This aerial photo shows the change in direction of traffic at the border. Source: cntraveler