Top 10 Things To Do In Santiago 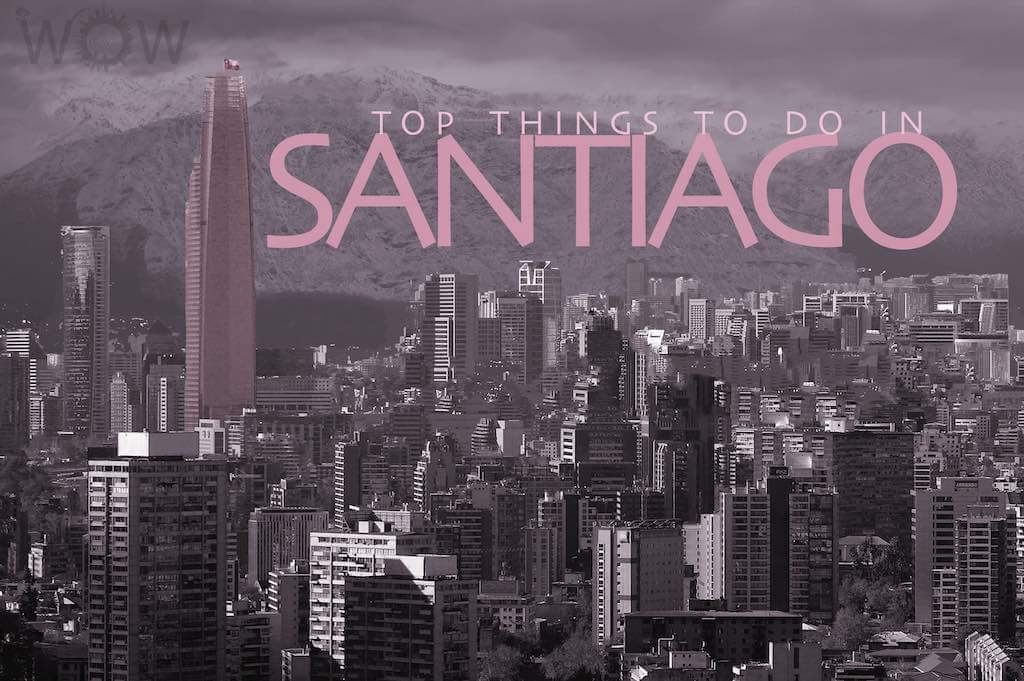 Santiago is the sprawling capital city of Chile, often praised for its idyllic location, surrounded by snow-capped mountains. It has a population of over 6 million people and is divided into ‘comunas’ which are similar to large suburbs, each with their own city council. Here, ancient traditions coexist with 21st-century life on every street and in each neighborhood. The city is clean, safe and has a host of top-notch museums, theaters, exclusive boutiques, small cafés, restaurants, long shopping strips and bars, not to mention some excellent nearby vineyards. With a perfect Mediterranean climate, Santiago is a must when visiting South America. Check out our Top 10 Things To Do In Santiago.

Standing at about 300 meters (984 ft) high over the city, this hill-hugging park is a recreational oasis with public pools, botanical gardens, and breathtaking views of both the city and the Andean peaks. At the peak, there is a church and a 22 meter (72 feet) statue of the Virgin Mary.

Tucked below Cerro San Cristobal and the watchful eye of Virgin Mary, Barrio Bellavista is currently one of the hot spots for the bohemian/artsy Chileans to hang out in. It is full of pubs, restaurants and dance clubs and plenty of little streets and alleyways with quirky art and artesian shops. In the heart of the Bohemian Bellavista you will find Patio Bellavista, a plaza that became the meeting place for tourists and locals alike, with cultural events from music to art.

With its white walls and European-style architecture, La Moneda was built between 1784 and 1805 by the Italian architect Joaquín Toesca for the purpose of housing the royal mint. La Moneda, the seat of the President of Chile nowadays, is quite possibly Santiago’s most recognizable landmark.

Santiago’s Central Market is a complex heritage that has the largest number of local diversity of the country, offering products such as seafood, grocery, herbs, fish, dairy and even jewelry. The products you must try here are the shellfish and the pisco sour, both of which are national favorites. If you don’t feel like cooking there is a series of bustling restaurants in the center of the market that will cook up delicious market-fresh meals for very reasonable prices. If you don’t want the touristy Central Market, cross the river to the hustle and bustle of La Vega where snoozing cats guard the tomatoes and locals sell gigantic avocados and corn-cobs for pennies. Moreover, amongst Santiago’s many street markets (ferias), some of the most notable are Los Domínicos and Santa Lucía, traditional arts and handicrafts markets.

The neighborhood Brasil is located in the western sector of the district Cívico of Santiago. In the nineteenth century, it was home to the more affluent families in Chile, which is why many of the buildings are palaces and residences with fashionable style of that time. In recent years, the district Brasil has reborn to new life by the creation of different spaces for art, culture and recreation, as well as different cultural movements taking place in the area. Locals often wonder why tourists are so enamored by neighboring barrios Brasil and Yungay. Yet, with much of Santiago eaten up by modernity, this sizable slice of colonial color offers a glimpse of the city’s past. At Huerfanos 1954, near the Plaza Brasil, they serve the best empanadas in the city. Source: homeurbano

Barrio Lastarria is Santiago’s hippest neighborhood. It is home to a fine collection of bars and restaurants frequented by people who wear designer glasses and black polo necks. There’s a decent art-house cinema, interesting restaurants, a museum, a theatre, a small park, several boutiques, various wine bars, and a book and antique market at the weekends. Source: matadornetwork. Source: matadornetwork

Forestal Park was created on reclaimed land by Jorge Dubois and is located in the historical downtown of Santiago by the Mapocho River. Forestal Park is one of the main green lungs of Santiago and a display of the 19th century aesthetic. Hundreds of trees and gardens, fresh air and tranquility give away to passersby who decide to take refuge in this place, escaping the stress of the capital.

The historic heart of Santiago, Plaza de Armas continues to pulse with excitement. Many Spanish colonial cities had a Plaza de Armas which was where people would gather for pretty much everything It has a freestyle fusion of fountains, sculptures, lined with palm trees and a theatrical spectacle of charlatans and bystanders that seem trapped in a warp zone of a non-stop chaos. The square is surrounded by many monuments, historic buildings such as the beautiful Metropolitan Cathedral, the Central Post Office and the Royal Court Palace.

Catedral Metropolitana is one of South America’s major tourist attractions. Despite its not being the oldest church of Santiago it is the most relevant. This cathedral rises in the center of the city in the Plaza de Armas. Its Baroque decoration rivals anything in Europe. There are ornate frescos on the ceiling, chandeliers, and gilded columns.

The Teatro Municipal is the most important stage theatre and opera house in Santiago. It is Chile’s oldest cultural center and the principal scenario for opera, ballet, theater, symphonic concerts and chamber music from around the world. The building was designed by the architect Claudio Francisco Brunet des Baines, inspired by the French neoclassic style. It was inaugurated on September 17, 1857 with the opera ‘Ernani’, by Verdi.