Top 12 Things To Do In Valparaiso 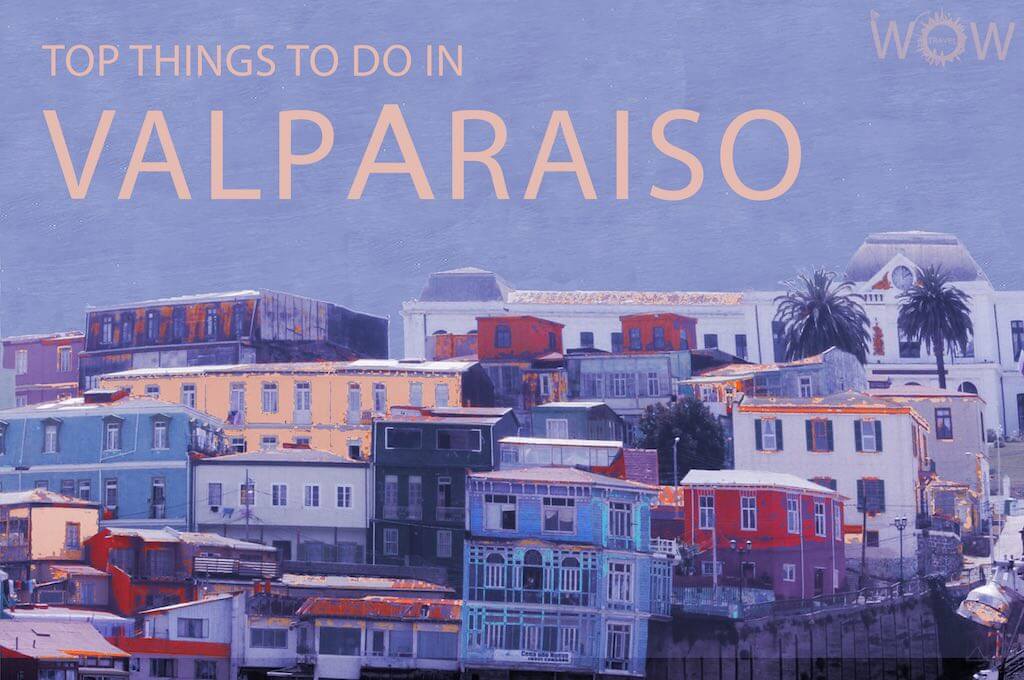 The city of Valparaiso in Chile is one of the South Pacific’s most important seaports. In the second half of the 19th century, it was a major port of call for ships that crossed the Straits of Magellan, traveling between the Atlantic and Pacific. The opening of the Panama Canal brought an end to its golden era as a reduction in ship traffic caused a staggering drop in the city’s port-based economy. However, the first two decades of the 21st century saw a revival of the city as more people, especially the artistic community were drawn to its rich cultural heritage. Valparaiso is synonymous with a maze of steep winding streets, cobbled alleys, colorful buildings and funiculars, called ‘ascensores.’ The historic quarter of the city, which was known as ‘The Jewel of the Pacific’ was declared a UNESCO World Heritage Site in 2003.
[booking_product_helper shortname=”valparaiso”]

When this grand ‘White House’ opened in 1893 it was the headquarters of the Arturo Prat School for naval cadets. It became the National Maritime Museum of Chile in 1998, to showcase the rich maritime history of Chile. Numerous exhibits showing the history of the Chilean navy are spread over 17 rooms with some rooms with permanent displays. The Sala Hermandad de la Costa room is one of the more popular rooms for kids. Even if history is not your cup of tea, the front lawns of the museum provide some great views of the city.

The five-storied Art Nouveau ‘Baburizza Palace’ was built in 1916 and was the former home of a prominent businessman from Croatia, Pascual Baburizza. It was built for the Zanelli family who later sold it to Baburizza when they moved back to Italy. The palace was converted into a museum in 1971. The Museum of Fine Arts has an important collection of works of various painters bequeathed by Baburizza to the city of Valparaiso. Besides the beautiful works of art, the impressive building is definitely worth exploring.

Due to its steep terrain Valparaiso has had a number of funiculars that were constructed in the late 19th century and early 20th century to transport people. The El Peral funicular located between Justice Square and Paseo Yugoslav was the first to use steam traction equipment and became an icon of sorts during its inauguration. Its symbolic chimney and technology made it the most advanced funicular at the time. One can get great views of the bay and the surrounding mountains from the top of the Paseo Yugoslav.

The Plaza Sotomayor, named after Rafael Sotomayor, is a UNESCO Heritage Site. Surrounded by some great architecture especially, the iconic blue colored Edificio Armada de Chile (the headquarters of the Chilean Navy), the square along with its surroundings is part of the historic district of the city. The monument in the center of the square was built in 1885, in the same place where the Stock Exchange once stood. Many of the buildings around the square date back to the late 19th century. Plaza Sotomayor was remodeled in 2000 and was extended to the Prat Wharf in 2004.

It’s often said that the ‘dead tell no tales’ but much of Valparaiso’s history is revealed by during a visit to its three cemeteries. While Cementerios 1& 2 are the final resting places of the city’s prominent and infamous citizens, laid to rest in opulent tombs resembling mini palaces, the Dissidents Cemetery is probably far more interesting. The majority of the departed souls laid to rest in this cemetery were European and North American Protestants, free thinkers and other non-Catholics. Until 1883, non-Catholics were forbidden from being buried in ‘holy ground’ if they died in Chile. So the burial place in Valparaiso which was established in 1823, was used for non-Catholics who died as far away as Santiago and La Serena. Many tombstones at the cemetery are in English but an equal number are ‘multilingual.’ If tombstones don’t interest you, come here to avail of some gorgeous views of the city.

One of the most visible landmarks of the city is the Iglesia de San Francisco on Cerro Baron. The church which was completed in 1846 also served as a lighthouse to sailors until the early 20th century. It was remodeled in 1890 and declared a National Monument of Chile in 1983. Unfortunately, a fire that same year damaged much of the church. The church was reconstructed, and in 2010 another fire which started in the attic almost reduced the church to ashes. Three years later, when the church was due to be inaugurated, a third fire which had its origins in the institute next door, engulfed the structure once more. Despite the horrors that the structure has been through, the tower still stands tall.

Monument to the Heroes

This iconic monument right in the center of Plaza Sotomayor is a tribute to the heroes of the Battle of Iquique, which was fought against Peru and Bolivia in 1879. The monument was erected in 1886 on the site where the Stock Exchange once stood. Right at the top is the statue of Arturo Prat Chaco, the commanding officer of the Esmeralda, which was sunk after four hours of combat.

One of the three houses that belonged to Chilean poet Pablo Neruda sits atop a hill in Bellavista, providing visitors with a spectacular view of the bay. The house was erected by the Spanish builder Sebastian Collado, who intended to spend the last years of his life here. Unfortunately, his wish was left unfulfilled as he died before the house was completed. The house was then sold to Neruda in 1959 who fell in love with the design and location. Today the four-storied house with an attic has been converted into a museum through which visitors can wander around at will. Interesting objects and paintings gifted to Neruda by his famous friends can be seen throughout the house. However, visitors will probably enjoy the view even more. It’s best to get to the house in the morning as there are only limited spots.

The Lutheran Church of the Holy Cross has the distinction of being South America‘s first Protestant church with a bell tower. Designed with classic German elements like the green color and tile roof, the church was built in 1897 when a sizeable German population lived in the city. The old organ in the church which was used between 1855 and 1901 in the Anglican Church of Saint Paul, is still functional. Located within the area declared as a World Heritage Site, the church is worth a visit.

Valparaiso has at least 16 ‘ascensores’ but Polanco Lift is the only true passenger elevator as the rest are all funiculars. It has three stations and connects Polanco Hill with Simpson street. The lift was inaugurated in 1916 after two years of construction and was later declared a National Monument of Chile in 1976.

This rather small church built in a style that represents three rectangular ships, has a big history behind it. Iglesia de la Matriz was reconstructed for the fourth time in 1842 after the previous church had been devastated by an earthquake in 1822. The first chapel which was just a little bigger than a hut was founded in 1559 by the Bishop of Santiago. It was later developed by wealthy families in the city. However, in 1578 it was looted by Sir Francis Drake who took away a silver chalice along with the church’s treasures. In the 17th and 18th centuries, the church was again the subject of more looters, this time in the form of pirates.

A 20-minute drive from Valparaiso will bring you to the town of Renaca at the northernmost extreme of Vina del Mar. The town is a popular summer vacation destination because of the lovely beach. Predictably, most of the touristy part of the town is located around the main beach which is locally known as ‘long beach.’ Visitors can also enjoy various aquatic activities like sailing, surfing, and windsurfing.