Top 12 Things To Do In Turin 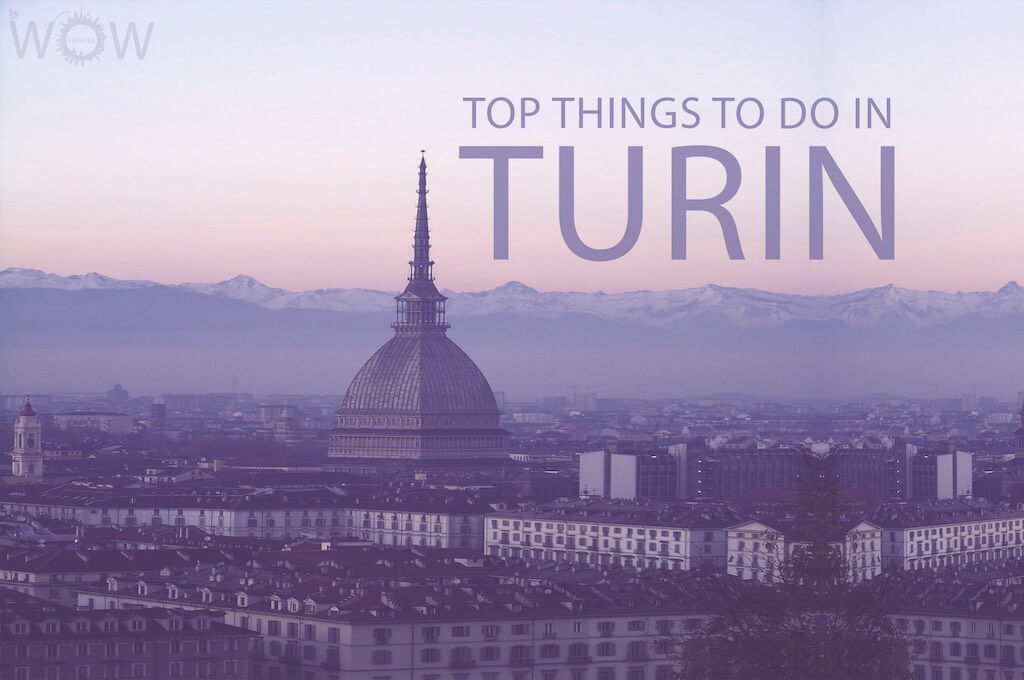 Located in northwest Italy, Turin is the only state in Italy that has a direct connection with true royalty. The first King of Italy, Vittorio Emanuele II of the Savoy dynasty was born here. Today the city is an important cultural and business center. However, when it comes to tourism, Turin is probably one of Italy’s most underrated cities, which in a way is good as it adds to the charm of exploring the beautiful city without the usual chaotic crowds. There is much to see in Turin with history leaving its mark all over the city.  From the many Savoy palaces to the sacred churches, Roman fortifications and lively squares, your time in Turin will be choc-a-bloc with things to see and do. Here is a list of 12 things to do in Turin that should definitely make it to your itinerary.
Booking.com

The huge pointed basilica of the Mole Antonelliana is an icon of the city. Towering above the surrounding skyline this is possibly the most distinctive building in the city. This particular monument which was originally a Jewish Synagogue was created in 1889. It currently houses the National Cinema Museum. Apart from all that you experience at the museum, the other highpoint of your visit here will be a ride in the panoramic glass elevator which takes you to a height of 85 meters to the Mole platform. You can feast your eyes on spectacular views of the city and the surrounding Alps.

A good place to unwind is the Parco Valentino, which was created in 1856. What is now the second largest public garden in Turin, spread over 42 hectares, the park is a popular place for locals and tourists as it serves as a great picnic spot and is also an ideal place to stroll along the River Po. The park is also home to Valentino Castle, which currently houses the University of Architecture and therefore not open to visitors. You can, however, marvel at its beautiful facade as you walk in the park. Besides the castle, the park is also home to a beautiful Botanical garden and a replica of a medieval village.

Located in the heart of Parco Valentino this mock-medieval settlement, which was built for the Italian General Exhibition in 1884 is a popular attraction throughout the year. The inspiration for this village was drawn from over 40 sites throughout Piedmont and Aosta valley, whose architectural and artistic features were retraced and recreated by eminent artisans of the time. The village has fountains, squares, streets, frescoes, real houses and workshops for artisans. The highpoint of the village tour is the Rocca or fortress.

The basilica sits at the top of a hill and is easily visible from a distance. The basilica which was built in 1731, features a baroque style and is remarkable for its huge circular facade with a dome. The beautiful orange and white design with its ornate decorations is an architectural delight. A crypt with the tombs of the royalty of the House of Savoy lies within the basilica. This vantage point provides another breathtaking view of the Alps and the city of Turin.

The Cathedral of San Giovanni Battista is a great example of the architecture of the Renaissance period. Built on the site of three previous churches, the church is dedicated to Giovanni Battista, (Saint John the Baptist) the patron saint of Turin. The cathedral is one of two churches in Turin which house the remains of the Savoy royal family. The cathedral is a revered site for pilgrims because of the hallowed Holy Shroud which is safely stored in one of its chapels. The relic cannot be admired by the general public as it is covered by a sheet and lies in a watertight seal, but a replica of the shroud is displayed.

The Royal Palace of Turin is a World Heritage Site that was built in the 16th century for the House of Savoy and served as the royal residence until 1865. Witness the true splendor of royalty at the palace as you browse through the various sections such as the gilded king’s apartments, the Royal Armory with its impressive collection of stuffed horses with armored riders, and the Royal Library with more than 200,000 books. The beautiful Royal Gardens, beyond the Palazzo, are also a feast for the eyes.

Porta Palatina is a great place to get an understanding of Turin’s history. As one of the best-preserved 1st-century Roman gateways in the world, the Porta Palatina is evidence of the Roman phase in Turin. It served as one of the entrances to Turin during the Roman era. The design of the gate is typically Roman, facing a quadrangular courtyard. A part of the guardhouse is still visible on the ground near the gate.

The Church of the Virgin of Consolation is one of the oldest churches in Turin and a masterpiece of Baroque art, although there are influences of other forms of architecture present throughout. Ancient portions of a Roman wall, a baroque set of domes, and a Romanesque bell tower form some of the diverse architecture visible here. Originally built in the style of a basilica, much of the church was rebuilt over a period of time. The church was transformed from a parish into a shrine because of the increasing popularity of the devotion to Our Lady of Consolation.

This is one of Turin’s main squares nicknamed the ‘living room of Turin, ‘and the favorite place for many people visiting the city. The pedestrian-only area has a bronze statue of the Duke of Savoy in the main center, and the twin churches of Santa Cristina and San Carlo Borromeo located close to the southern edge of the square. Beneath the arcades of the square, some of Turin’s historic cafes and stylish shops are located making it a great place for shopping and eating.

Piazza Castello is probably one of the best places in Turin to begin a walking tour because of the many iconic buildings that it houses. From the Royal Palaces and Royal Armory to the beautiful fountains and statues, you can begin your walk-through history right here. Located right at the center of the old city, the Piazza Castello there is lots to see and do in the area. Numerous cafes and restaurants line the streets where you can stop for a breather. We recommend staying at one of the 11 Best Hotels in Turin near this attraction.

The Palazzo Madama takes center stage at the Piazza Castello. Prior to becoming a palace in the 13th century, it was once a medieval castle built on the remains of the Roman east gate. Take a walk inside the palace to discover Turin’s history and legacy. Each level of the palace is representative of a different era, beginning with the Roman foundations and the Renaissance and Middle Ages on the ground floor, to the richly appointed state apartments of the 17th and 18th century, on the first floor. You can also revel in another stunning panorama of Turin from the top of the towers.

Villa della Regina also known as Vigna di Madama was originally built for Prince-Cardinal Maurice of Savoy as a private villa with its own vineyard. On his death at the villa, he willed it to his wife Louise Christine of Savoy, who also breathed her last in its environs. The villa was renamed Villa della Regina (Villa of the Queen) when it passed to Anne Marie the wife of the King of Sicily. Its garden, shaped like an amphitheater with small waterfalls, and a beautiful fountain add to lure of the place. There is a magnificent Chinese cabinet inside the house which has many paintings and frescoes. The great location of the villa, from where you can get a panoramic view of the city and the River Po, make this place worth the visit.