Top 11 Things To Do In Annecy 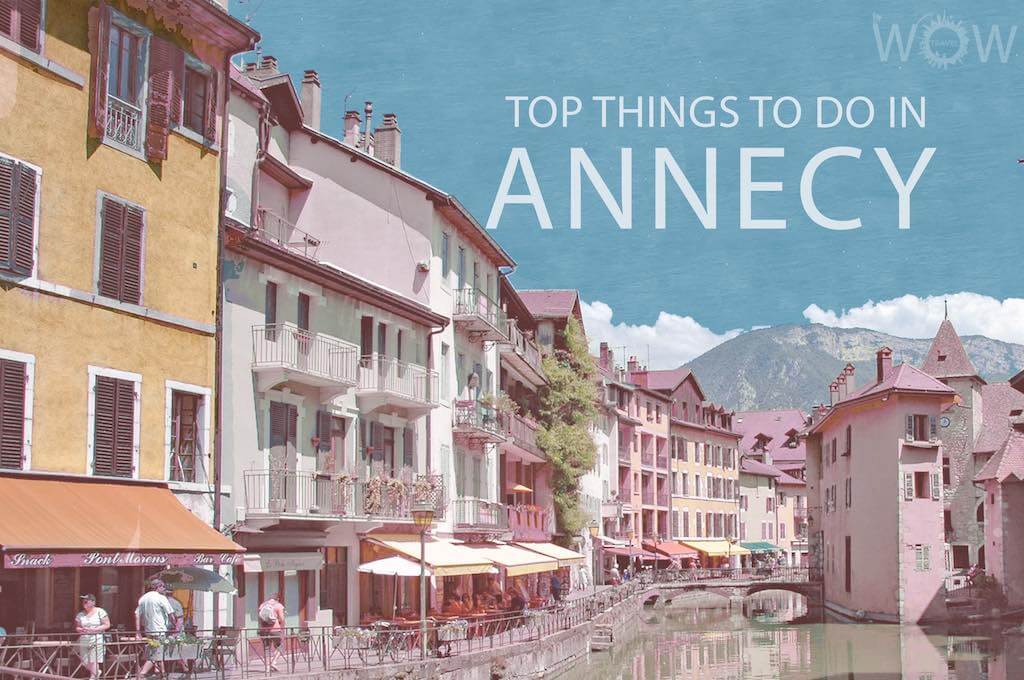 Once referred to by geographer Raoul Blanchard as the “Pearl of the French Alps,” the largest city of the Haute-Savoie department in southeastern France definitely lives up to its name. Deriving its name from the beautiful lake on which it lies, Annecy is a gorgeous blend of natural beauty and manmade charm. Its Old Town has an old-world feel which is accentuated by three canals and the River Thiou running through it, giving it the nickname ‘Venice of the Alps.’ The influence of the Counts of Geneva followed by the Dukes of Savoy is evident in some of the impressive structures around the city. Many medieval buildings have now been converted into business establishments but it only enhances the charm of this beautiful city.
[booking_product_helper shortname=”annecy”]

Winding cobblestone streets, pastel-colored medieval buildings with gorgeous flower boxes, and emerald green canals with storybook bridges give the old town of Annecy its special charm. Wandering through the pedestrian-only streets and by the wayside-canals will make you realize why this area has rightfully earned the title of an Alpine Venice. The Old Town of Annecy is a step back in time that visitors will definitely savor as they sit at any of the cafes along the canal front.

The beautiful iron footbridge connecting Jardins de l’Europe and Paquier Esplanade over the Lake Annecy is a popular spot for all ages, not only for the legend attached to it but also for the spectacular views it offers. Popular legend says that if two lovers kiss in the middle of the Pont des Amours, they are destined to be together forever. However, even if you don’t have that special someone, the bridge is worth a visit just for the scenery.

The crystal clear waters of the gorgeous Lake Annecy will leave you in no doubt as to why it is called Europe’s cleanest lake. Relaxing beside the serene surroundings of the lake, which is cradled between some stunning mountain scenery can be extremely cathartic for the wandering soul. Add to that a number of small but clean beaches and you have your slice of heaven. If its adventure you seek then the lake has plenty of opportunities with a number of water-based activities.

This historic monument surrounded by the waters of the Thiou canal evokes a sense of mystery and brooding. Having played the role of a courthouse, prison and administrative center, and even a home for the elderly, the Palais de I’lle is now a museum. Visitors can tour the dungeons and the grounds of this old monument which bears a strong resemblance to a boat. Built on a natural rocky isle that parts the Thiou River into two, the 12th-century building was also used for minting.

Towering over the Old Town is the restored Château d’Annecy, an imposing yet elegant piece of architecture. Once the residence of Counts and Dukes, the castle has now been converted into a museum that showcases regional art. The Animated Film Museum is also located within the castle complex. Built between the 12th and 16th centuries, the castle has often been a victim of fires and was eventually abandoned in the 17th century. It was later repaired and served as military barracks until 1947. The views from the castle are quite spectacular.

The original foundation of the Notre Dame de Liesse dates back to 1360 to the Genevan Count Amedee III who desired to use the new church as a necropolis for his lineage. However, during the French Revolution, the edifice was demolished. It was rebuilt in the 19th century in the Sardinian neo-classical style with only the 16th-century bell tower standing as a reminder of the original church.

The protected Semnoz mountain area extending from an altitude of 450m to 1,699m at its highest point is a popular destination during summer and winter. It is the only summit of the French Alps which can be reached by vehicle. The views from the top are fantastic with Mont Blanc and the other mountains of the Bauges Massif also visible on a clear day. In winter, the terrain is great for skiing, snowshoeing and snowkiting while in the summer it is a popular hiking destination. The trail goes through some gorgeous forests which are ideal for a summer trek.

From its elevated position on the top of a hill, the neo-Romanesque Basilique de la Visitation looks grandly over the town. The 72m high bell tower with 38 bells The chapel which was built between 1922 and 1930 is part of the Visitation monastery and houses the tombs of the co-founders of the religious order, Francois de Sales and Jeanne de Chantal.

Annecy’s oldest church is the Roman Catholic Eglise Saint-Maurice near the Canal du Thiou. The 15th-century church dedicated to the Patron Saint of Annecy was the former chapel of the Dominican convent. Saint Maurice Church is where St. Francois de Sales received his First Holy Communion and later began to preach here. The Savoyard Gothic architecture is evident in the large overhanging roof of the church. The bell tower dates back to 1450 but was partially dismantled during the French Revolution and later restored in 1827.

The highest of the mountains that surround Lake Annecy is the Tournette at 2,351 meters. There is a motorable road that goes a fair way to the top. From the parking area at the Chalet de l’Aulp, it is a three-hour trek to the summit of the mountain along a well-marked trail. From the summit, the breathtaking views of Lake Annecy and the snowy peaks of the Savoie are quite incredible. For those not game enough to hike their way to the top, the chalet at the parking area also offers some stunning views of the imposing Tournette.

About 12km south of Annecy in the commune of Menthon-Saint-Bernard is the imposing Chateau de Menthon castle, rising grandly from a 200meter high rock on which it stands. The initial structure which was a simple wooden guard post was built in the 10th century and later expanded between the 13th and 19th centuries to the present grand structure comprising 105 rooms on four different levels. The castle is quite popular with visitors as there is quite a lot to see, besides the spectacular views of the surroundings. St. Bernard the patron saint of skiers was born here in the 11th century.