Top 12 Things To Do In Casablanca 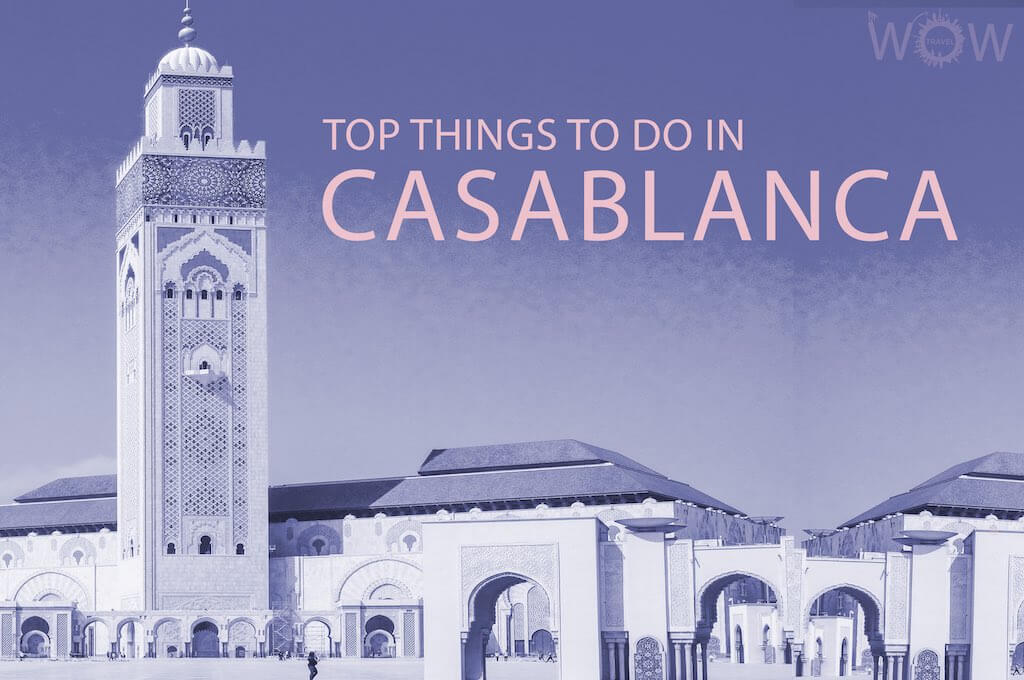 The city of Casablanca is the economic capital and the largest city situated at the central-western part of Morocco along the coast of the Atlantic Ocean. Invaded by Portuguese, Spanish, British and French colonialists, the city has been the prime attraction for its demography, especially to establish the naval base in the Europe-Asia sea trade route. An epitome for commerce in Africa, Casablanca is also famous as a feature of celebrated Hollywood movies. With rich colonial history, culture, architecture, religious monuments, and supreme urban stature, Casablanca will welcome its visitors with a parcel of amusements for a worthy vacation!.
[booking_product_helper shortname=”casablanca”]

Certainly, the prime attraction for tourists in Casablanca, the Hassan II mosque is the largest in Africa and the 5th largest in the world. Its iconic 60 storied minaret is the second highest in the world and is crowned by a laser light directed towards Mecca. Positioned partly on sea and party on land, the mosque is located on a promontory. With handcrafted marbles, retractable roofs, titanium-bronze finished exterior, the mosque stands out as an architectural splendor of modern times with an accommodation (worshippers) capacity of 105000 people!

Place Mohamed V, named after the famous king of Casablanca, is a famous square at the heart of the city Casablanca. It is a tourist halt because of its location in the vicinity of artistic buildings that provides some open space to take a few photographic memoirs of Casablanca. Ornamented with beautiful fountains (particularly beautiful at night with fantastic lighting), the square is a place to relax and look around the cityscape.

Cathedral du Sacre Coeur or the Church of the Sacred Heart is the celebrated Roman-catholic cathedral of Casablanca and the witness of Missionary reigns of the city. Although the religious functioning of the church was ceased after Moroccan independence, the church continues to be a tourist attraction as a cultural center and its supreme Neo-Gothic architecture. Many celebrity performances, as well as light and sound shows, are also hosted here.

Famous as the official residence of the king of Morocco, Dar al-Makhzen is also known as the El Mechouar Essaid Palace (the venue of happiness palace). This has been the royal seat and court of the kings since the early nineteenth century. It has witnessed the birth, rise, and fall of kings and celebrated Royal marriages. The palace is an attraction for tourist owing to its grandeur. Dar al-Makhzen also houses a mosque for the royal family and is encircled by a parade ground.

The Parc de la Ligue Arabe or Arab League Park is situated at the east of the Cathedrale Sacre Coeur and nearby to the Mohammed V square. The park has gravel walkways lined by palm trees, various fruit trees, fountains, mosaic-lined water channels, rose beds and lawns. The entry in the park is free. It is popular as the green lung of the city, which is an escape from the urban hustle of Casablanca. There are refreshment cottages as well.

A popular tourist destination, Villa des Arts is located at the serene boulevard Brahim Roudani of Casablanca. The building is a modern French architecture which houses famous contemporary paintings, artifacts, and sculptures. Though small, the gallery is significant being the only art gallery of International stature at Casablanca. The entry is free and there is a peaceful lawn for a lazy walk. There are nearby cafes to provide refreshment to the visitors.

Casablanca twin-center will remind you of New York’s famous twin towers! Designed by a celebrated Spanish architect, the iconic skyscrapers are located at the heart of the city between the crossroads of Zerktouni Boulevard and the Boulevard Al Massira Al Khadra. They are the gateway to Casablanca’s rich urban residential complexes. Both the towers are 28 storied. The tower A (west) houses shopping center along with multiple floors of office; whereas the tower B (east) has Casablanca’s famous five star Kenzi tower hotel and the Royal suites. This hotel is featured on our list of best hotels in Casablanca.

A majestic witness of Casablanca’s rich heritage and cultural confluences, Temple Beth-El is situated at Rue Jaber Ben Hayane, very close to the Hasan Mosque. A visitor can find the true essence of the vibrant Jewish culture while exploring the serene synagogue (temple dedicated to Judaism). The Temple is a tourist favorite also due to its splendid medieval middle-eastern artifacts and painted window panes.

Famous as the Museum of Moroccan Judaism or El Mellah Museum, the Moroccan Jewish Museum was established in the late nineties during the reign of King Hassan II of Casablanca. The museum was founded by the famous historian and colonial activist, Professor Simon Levy, who worked on the preservation of Jewish culture in Morocco. Inside the museum, tourists can find fine artifacts of Moroccan Jewry, like the bimah from the Beni-Issakhar Synagogue in Casablanca, mezuzahs, and Hanukiah menorah. There is also a significant collection of Berber history, which includes costumes, jewelry, and Fatima pendants. The unique reconstructed jewelry-making shop, created using the workbench and tools of Moroccan Jew, Saul Cohen is another prime attraction. But the most notable addition of the museum, however, is the preamble of Morocco’s updated 2011 constitution, which marks the ethnic and religious pluralism in Morocco.

The Central Market or the Marche central is located at the heart of the city of Casablanca near the Mohammed V Boulevard. This place can certainly be added to the bucket list during the city tour in order to have an exquisite experience of the Moroccan authentic market. Fresh vegetables, fruits, and other articles are available here. Visitors may choose to have a fine supper comprising authentic local cuisine. Although the market is cheap, it will be interesting (fun and difficult at the same time!) encounter with Arabic languages and local dialects!

The Old Medina of Casablanca is the city’s old plaza. The plaza along with the old market is connected by narrow streets, guarded by old and historical buildings. It will certainly take the visitors on a time trip along the older times of classical Arabian fables. The market is cheap and famous for its leather goods. Shops are selling beautifully handcrafted home decor as well as diverse articles of tourist interest. The plaza also has some cheap but good rated eateries to welcome tourists with fine local delicacies!

The esplanade of Casablanca or the Corniche is a long, urbanized and beautifully maintained promenade and a driveway along the coastline of the Atlantic Ocean. A visitor can have a relaxed walk along the Corniche, with a view of the vibrant beaches swept by the ocean waves and enjoy a fantastic sunset. Another interesting aspect is the pools along the Corniche. The street is studded with restaurants, eateries and recreation centers of all budget and preferences!