Top 12 Things To Do In Kairouan 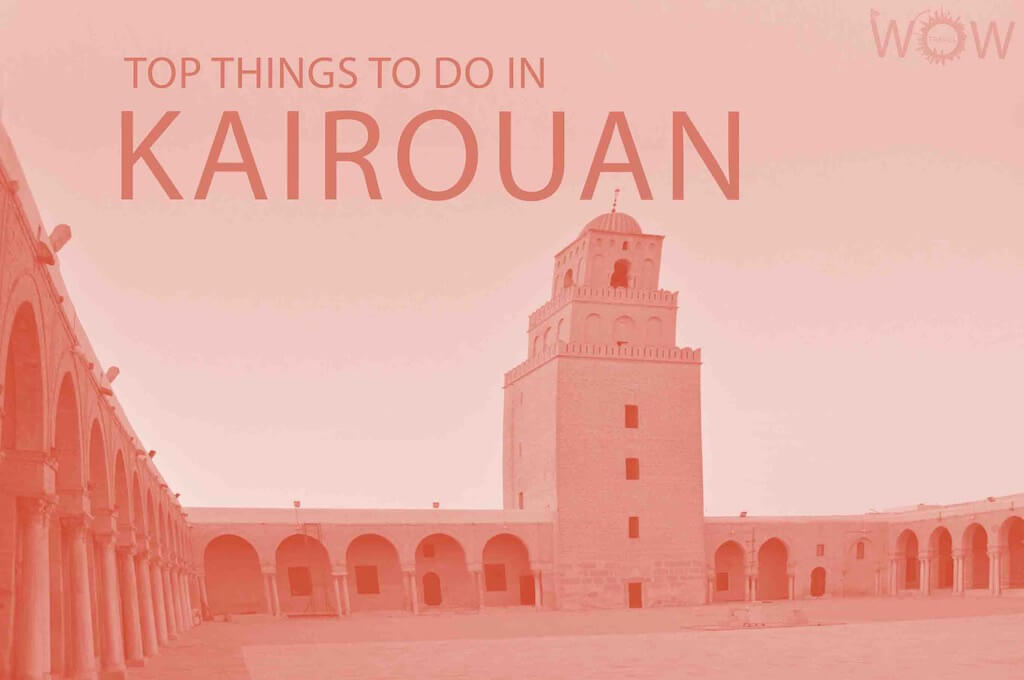 Amidst the dry inland deserts of North Africa, in the country of Tunisia, lies the fourth holiest spot for followers of the Islamic religion. Following Mecca, Medina, and Jerusalem in close quarters, Kairouan is also a UNESCO World Heritage Site owing to its extravagant Islamic architecture. Legend has it that a visit to Kairouan 7 times is equivalent to a singular Haj to Mecca. This place has existed for a long time and has undergone a period of destruction in the 11th century A.D. However, Kairouan still holds a special place in the hearts of devout followers of Islam and among art lovers too, due to exquisite artistic mastery. Amongst the many mosques such as Sidi Oqba Mosque, Mosquée des Trois Portes, etc. and the wonderful alleyways, Kairouan has emerged as a traveler’s paradise. So here are 12 such places in Kairouan that are so charming that it is definitely going to take your breath away!

A grand mosque that spans over an area 135m in length and 80m wide, the Sidi Oqba Mosque is also known as the Great Mosque. Masterfully created by Uqba Ibn Nafi, the founder of Kairouan in 672 AD, this mosque displays some exotic craftsmanship. This is the most significant monument of Islam in North Africa. The architecture of this mosque has gone on to inspire other mosques to be created such as the Great Mosque of Sousse. Though disbarred from entering the prayer hall, non-Muslim tourists can definitely get a glimpse as the prayer hall is mainly kept open!

Sidi Sahab was one of the Prophet Muhammad’s companions who died in 685 AD. This mosque, also known as the Barber’s Mosque is built upon the tomb of Sidi Sahab. The peculiar name of this mosque comes from the fact that Sidi Sahab always kept some hairs from the Prophet’s beard. This mosque is not very old and was constructed in just 1629 with most of its architectural development taking place in the 19th century.

Commonly known as the Mosque of Three Doors, a scholar from Andalus created it in 866 AD. The name has its origin from an outstanding façade comprising of three doorways. There are two impressive friezes depicting Kufic inscriptions. This mosque is not open to non-Muslims but the place is generally visited to look at the famous front façade.

Among the many attractions available in Kairouan, a walk through the alleyways of Medina (old town) is one that every traveler looks forward to. The walls are plastered with multi-colored doors with paint peeling off, whereas the cobbled streets give off an aura of the old Arab lifestyle. Towers constructed by the Husseinites are scattered throughout the 3.5 km circuit along with the city. Drop the map and wander around to get one of the best experiences of life.

On walking straight down Avenue de la République, north of the medina, one would be led to the Aghlabid Basins. This humongous reservoir with a capacity of 50,000m3 was watered by an aqueduct from the Djebel Cherichera, about 36km away. The Aghlabid Basins supplied water to the Aghlabid Palace and was a hub for relaxation for the royals. These basins had dried up but were restored back in 1969 and have since been a popular tourist attraction.

The Zaouia of Sidi Abed el Ghariani is a lovely example of Arabic artistry. Carved from wood, this tomb is in dedication to a holy man from the 14th century. The tomb is a kaleidoscope of colors being covered in vibrant ceramic tiles creating exquisite patterns. The wonderful artwork makes it a heaven for both photographers and students of art. A very important aspect of Zaouia Of Sidi Abed El Ghariani is well-preserved artwork that still takes away the breath of anybody perceiving it.

The Souks houses Arabic craftsmen displaying their extraordinary skills in their workshop. It was created between the 17th and `18th centuries and is still a place for the most glorious craftsmanship in Kairouan. To reach the Souks, one would find the El Bey Mosque to the right, and to the left, the El Maalek Mosque with the path leading right up to the Bab el Tounès or the Tunis Gate which marks the entryway to the Souks.

The Bir Barouta is known for its eerie strangeness and blatant uniqueness. The entry features a blue door that reveals a very old well from the 17th century on the first floor. The strangeness does not end here- this old well is still functioning by means of a camel. The camel is lodged to a pulley system and is forever destined to go round the well in the circle, continuously drawing water. Though an interesting sight to behold, this place indeed irks some animal-loving tourists and rightly does so.

To the eastern side of the Great Mosque lies a huge stretch of cemetery grounds that is scattered with a number of interesting and unique tombs. A gate crops out from the eastern walls of the Great Mosque, named after a holy woman, the Lalla Rihana Gate and opens directly into this cemetery. The cemetery ground dates back to 1294 and displays a Hispano-Mauresque style of architecture.

In central Kairouan lies the most astonishingly busy part of the town. Built in 1722, this central part features the New Town and is bustling with pedestrians, tourists, restaurateurs and what not! The Boulevard Habib Bourguiba is the main street along which the new town is scattered. The gate that opens into this part was originally called the Bab el Jaladdin or the Gate of Leather dealers. Nowadays, the new town is entered through the Bab each Chouhada which opens into the Place Muhammad el Bejaou or the Place des Martyrs.

The Mosque of the Sabres was built in honour of a man who is a blacksmith by profession but was regarded as holy. The zaouia, built in 1860, comprises five ribbed domes which are most definitely a center of attraction for tourists from all around the world. The mosque also meets regular visits from pilgrims from all around the world. Sabres, anchors, etc., along with wooden tables carved with prophecies from the holy man are on blatant display in this beautiful zaouia.

On moving somewhat 10km, towards the south-west corner of Kairouan, one would find themselves in an extravagant presidential palace which has been converted to a museum. Multiple exhibits from Kairouan and the Aghlabid residential complexes are displayed in this museum. Exhibits excavated from a site just 6 km away are also at display in this museum.