Top 10 Things To Do In Tunisia 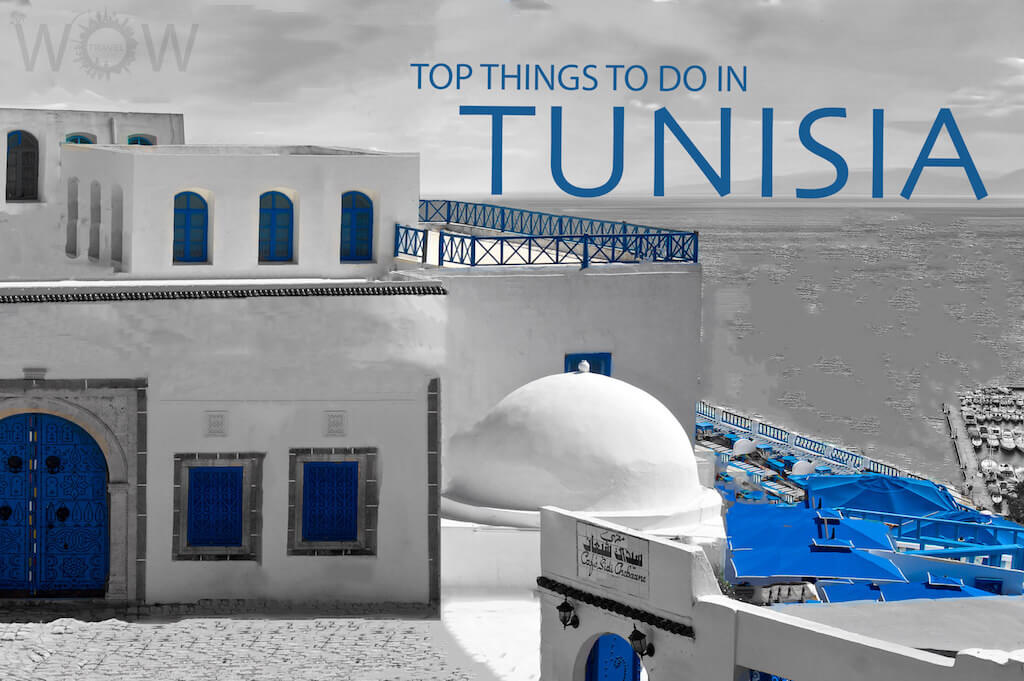 Located in the very center of Mediterranean Africa with a stunning seashore, spectacular desert landscapes, vibrant culture and rich history. Tunisia is a favored tourist attraction that welcomes holidaymakers and adventure-seekers from around the world. It is best known for its white sandy beaches and luxury hotels, but venturing away from the beach towards the desert, will reveal you to dramatic landscapes and some of the finest Roman-era sites in the world. Check out our list of the Top 10 Things To Do In Tunisia.

Port El Kantaoui is a tourist complex 10 km (6.2 miles) north of Sousse city. The place is all white buildings and cobbled streets with a swanky marina that takes center stage. The north side of Port El Kantaoui’s beach is lined with hotels. Much of it is privately owned so the white sands are kept in pristine condition. The pale soft sandy beaches in Port El Kantaoui are great for families and a quiet spot and soak up the sun. The warm clear waters provide an ideal environment for snorkeling, windsurfing, parasailing and diving.

Carthage, a UNESCO World Heritage Site, was founded in 814 BC and was a Roman metropolis in North Africa. Many of the sites now stand in ruins, but there is still a lot to see in this vast area, including the Roman Amphitheatre, Antonin Baths (once the largest baths built by the Romans) and Roman Village. You can get a great view from Byrsa Hill.  Source: wolfstad

210 km (130 miles) south of Tunis is El Djem, a modern Tunisian market town. It is home of the largest building in Roman Africa and one one of the largest Amphitheatres anywhere in the Roman world, which could hold up to 35,000 spectators. The amphitheatre is one of the most iconic architectural contributions of ancient Rome. The most famous example of such a structure is the Colosseum in Rome, where brutal gladiatorial battles took place.

There’s really no better way to get under the skin of a city than to walk through it and soak up the sights, sounds and smells. First port of call in Tunis? The Medina. Featuring an impressive collection of mosques, palaces and other buildings, the Medina of Tunis is the bustling and atmospheric old quarter of the city. Top prize in this area goes to the Al-Zaytuna Mosque or “Mosque of Olives”, which is thought to date back to the seventh or eighth century. A close runner up is the Sidi Mehrez Mosque in the Souk Ejjadid, due to its distinctive white domes. Access to the Medina is through the Bab el Bahr, a gateway also known as the Porte de France, a reminder of Tunis’ time under French rule (1881-1956). Source: historvius

Bulla Regia is a former Roman city and significant archaeological site in the northwestern part of Tunisia near modern Jendouba. The region became part of the Roman Empire in the first century A.D., under Julius Caesar. Previously a Berber site, Bulla Regia flourished under the Romans, who built a series of monuments and public buildings in the area, such as its amphitheatre. Bulla Regia is unique because its domestic architecture was constructed below ground in order to alleviate the intense heat. Most of the ornate mosaics adorning the houses have remained in site, and visitors can view the elaborate polychrome mosaics in their original context.

Monastir is a city on the central coast of Tunisia. Traditionally a fishing port, Monastir is now a major tourist resort. Located in Monastir is the mausoleum of Habib Bourguiba, the founder and first president of the Republic of Tunisia between 1957 to 1987. Another famous landmark is Ribat of Monastir, a fortress flanked by circular and polygonal towers. Monastir played host to the first Islamic Arab city in Africa which ruled at that time parts of present-day Tunis and Algeria. By the year 665, Monastir served as an outpost to defend the city of Kairouan, once a capital of Muslim Africa. The Ribat of Monastir, a bastion of acclaimed architecture, was built in 796 A.C. by Herthouma Ben el-Aien, governor of the Abbasid Caliph Haroun al-Rachid.

Just 5 km (3.1 miles) off Tunisia’s southern coast, Djerba is a small Mediterranean island with white sandy beaches and whitewashed domed houses, craft markets and palm trees, making it an ideal summer or winter break. The “island of the 100 mosques” has many of them scattered throughout its geography, their dimensions are adapted to the surroundings, reflecting the delicate simplicity of Mediterranean Islam. Djerba is full of sightseeing attractions with timeless villages. Its largest city is Houmt-Souk, the hospitality of its inhabitants and its rich souks will beckon you to discover the alleyways of the towns. It is one of the few remaining places in Tunisia where a Berber language is still spoken.

Dougga is a UNESCO World Heritage Site and is also one of best preserved ancient ruins of North Africa. The history of this site date back to the 6th century BC but most of the current monuments here are from the Roman period. Dougga is also one of the most photogenic sites in Tunisia due to its hilltop position and plenty epic temples and buildings. Source: travelwkly

Located on top of a steep cliff overlooking the Mediterranean just north of the capital Tunis, is the blue-and-white village of Sidi Bou Said. Wander the cobblestone streets with flowers draped from almost every wall and doorway, and beautiful flowing vines hanging throughout the entire area. The streets are lined with art shops, souvenir stalls and cliff-side cafe’s with phenomenal views. The Sidi Bou Said became a bohemian sanctuary; and its beauty now attracts wealthy Tunisians and inquisitive tourists alike.

With so many mosques, madrassas, and tombs, Kairouan is a Muslim holy city which ranks fourth after Mecca, Medina and Jerusalem as a place of pilgrimage. Despite the transfer of the political capital to Tunis in the 12th century, Kairouan remained the Maghreb’s principal holy city. Its rich architectural heritage includes the Great Mosque, with its marble and porphyry columns, and the 9th-century Mosque of the Three Gates. The Great Mosque of Kairouan was the first Muslim place of prayer in North Africa and remains an important pilgrimage destination today. The minaret of the Kairouan mosque, built in the late 700s AD, is the oldest one in the world that is still standing.