Top 12 Things To Do In Uzbekistan 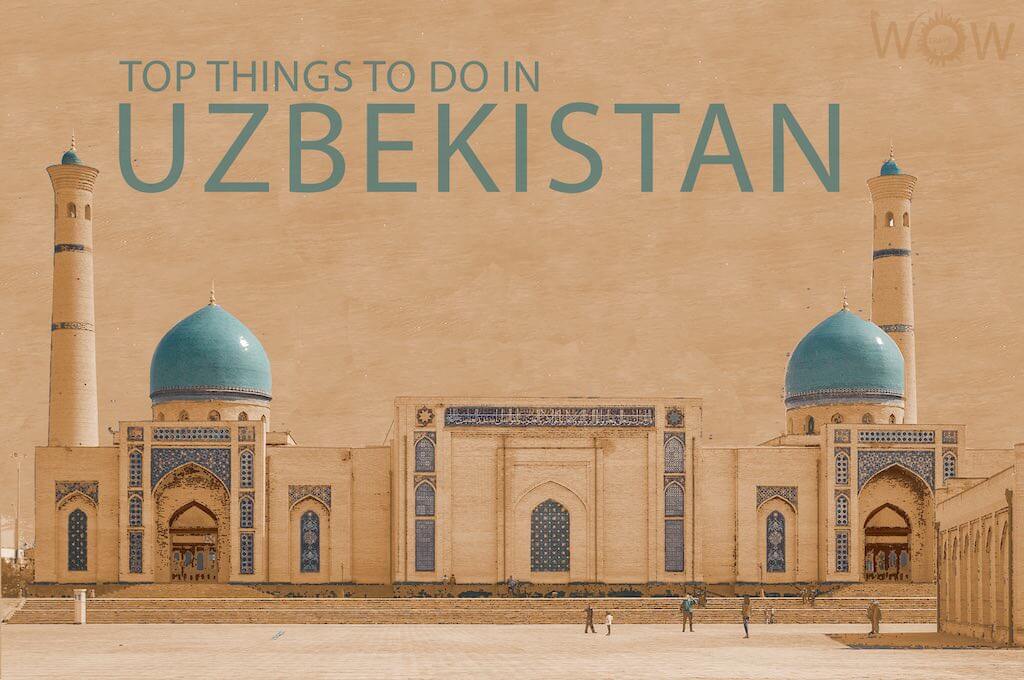 When you think about vacation destinations, Uzbekistan isn’t the first place that comes to mind. With beautiful mosques, elaborate mausoleums, and minarets, as well as great fortresses, Uzbekistan is a fantastic place to go to if you want to experience the cities along the Silk Roads. Here is a list of things that you should do when visiting this beautiful country.

The Tomb of Daniel, as the name suggests, is one of a few places claiming to be the final resting place of Daniel, the biblical prophet. The remains date back to 5th century BC and they were thought to be brought to Samarkand, sometime after his death. Local lore tells that the sarcophagus grows half an inch every year, one of the reasons why it is now 18 meters long. It was also said that on the day of his entombment, a natural spring of water appeared at the spot.

The name Elliq-Qala translates to “Fifty Forts,” and at the time of its discovery, only 20 were found. As time goes on, more of them are being discovered. Located in the desert oasis of Khwarezem, these ruins once served as the protection for a thriving empire and a popular location for travelers. Visiting this site can take up to a day and for those who want to spend more time exploring the vast lot, it is possible to stay overnight.

The Ark of Bukhara is an enormous fortress with 20 meter high walls and sits on a 9-acre lot in the city of Bukhara in Uzbekistan. Rumored to be created by Siyavusha, a legendary Iranian prince, the ark was built sometime during the 5th century AD and at the time, it was both a military fortress and a town, until it was taken over by Russia in the 1920s.  Within the last few years, the site has become a major tourist attraction complete with a museum about its history.

Protected by 10-meter-high brick walls, Itchan Kala is a town within the city of Khiva, Uzbekistan. The area which contains more than 50 historic monuments as well as 250 older houses, was listed as a World Heritage Site in 1990. It’s most popularly visited building include the mausoleum of Pahlavon Mahmoud, the Djuma Mosque, the multiple madrasas, and the two palaces built by Alla-Kulli-Khan.

Mo’ynoq sometimes spelled Muynak, is a city which is located in western Uzbekistan. Once a flourishing seaport and fishing community, the city was home to tens of thousands of residents. During the 1960s, the Soviet government diverted two rivers elsewhere which decreased the Aral Sea’s inflow. As the years passed, the sea eventually dried up and what is left is an armada of rusting ships, some of which were fleets during the Soviet era.

If you are looking for a traditional bazaar, then the Chorsu Bazaar in the town of Tashkent, is one of many that you can head down to. The word “chorsu” means “crossroads and that is probably because it is located across from the Chorsu Station. The building has a characteristic blue-colored dome, and underneath it, one can find everything from spices and produce to souvenirs and daily household necessities.

The Bug Pit at Zindon Prison

Located at the Zindon Prison in Bukhara is the Bug Pit, a 4-meter-deep hole that is only accessible by rope. The pit was used to keep prisoners while the guards poured bugs, rodents, and even scorpions onto their heads. Two British soldiers (Connoly and Stoddart)  were kept and tortured in the pit and in 1842, they were executed in front of the Ark Fortress. What remains are mannequins portraying the imprisonment.

The Kalyan Minaret and Mosque which are found in the Po-i-Kalyan compound are some of the most popular landmarks in the city of Bukhara. The minaret which is also known as the “tower of death” is 46-meters-tall and was built by then ruler Mohammad Arslan Khan in 1127. Centuries later, the Kalyan Mosque which consists of 208 pillars and more than 280 domes was completed.

Constructed in the 1870s, the Khan’s Palace, also called the “pearl of Kokand” once served as the home of Khudoyar Khan, the last ruler of Kokand Khanate. The palace was built in 1871 on a 4-acre wide complex with 7 courtyards and over 100 rooms. Today the beautifully decorated palace has less than half of the room and courtyards which were initially bult, and it is now a museum that shows off the city’s local history.

Mustaqillik Maydoni, also known as Independence Square, is the central square in Tashkent. After the country declared its Independence in 1991, the preexisting square’s name was changed from “Lenin Square” to what it is now. The monument of Lenin found in the square was later dismantled and it was replaced by the Monument of Independence of Uzbekistan. On public holidays and during special events, celebrations and military parades are held here.

Literally translated to mean “Tomb of the Living King,” the Shah-i-Zinda is a necropolis located in the north-eastern region of Samarkand. The compound which was built over a period of 8 centuries and on it, there is an ensemble of buildings including beautifully decorated mausoleums of noteworthy people, domed arch passageways known as chartaks, temples, and a mosque. Dressing conservatively is a requirement.

Initially called the Constantine Square, the Amir Temur Square’s name was changed in 1993 as a dedication to Amir Timur, the commander and founder of an empire which lasted longer than 200 years. Located in the center of the square is a monument of Temur which was created by Ilkhom Jabbarov. It shows the commander on top of a horse with his famous motto engraved in four languages “power is in justice.”