Top 12 Things To Do In Zadar 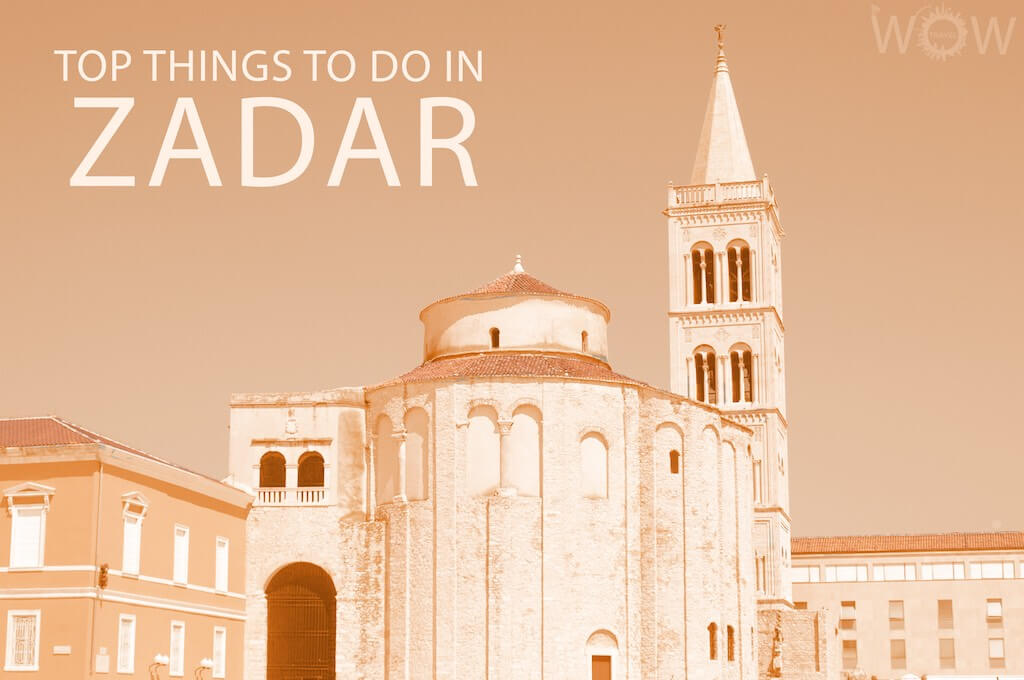 Rather surprisingly, hordes of tourists have not yet descended on Zadar, the oldest continuously inhabited city in Croatia and the second-largest metropolis in Dalmatia. Zadar has a rich and varied history right from the Late Stone Age, to its Roman era and invasion by the Huns. In the early 15th century Zadar was sold by Ladislaus of Naples to Venice. The threat from the Ottomans in the 16th and 17th centuries resulted in the building of a new system of castles and walls, which lasted 40 years. By the end of it, Zadar was transformed into the biggest fortified city in Dalmatia.  The later years saw the city being controlled by Austria and Italy. Evidence of Zadar’s history is seen in the old part of the city as well as some of the beautiful monuments that still stand tall. Today, the city is a fine blend of art and culture with ancient relics and modern installations entwined to give it a unique character.
[booking_product_helper shortname=”zadar”]

The largest Pre-Romanesque building in Croatia dates back to the 9th century and is a wonderful example of the centralized style of the Carolingian period. Initially called the Church of the Holy Trinity, the church was rededicated in the 15th century to the man who is said to have built it, Saint Donatus. The church which was built on the Roman Forum used stones and two complete Roman columns from the Forum during its construction. The simplistic Church of St. Donatus has been used for various purposes since its construction. When Zadar was ruled by the Republic of Venice it was converted into a warehouse, then served as an archaeological museum when the city was a part of Yugoslavia and finally as a concert venue due to the good acoustics of the building.

Greeting to the Sun

One of Zadar’s most iconic modern monuments is the beautiful installation, Greeting to the Sun, created by Croatian architect Nikola Bašić. The 22-meter wide circle which is embedded into the pavement consists of three hundred multi-layered glass plates which are strategically placed on the same level as the paved waterfront. These plates which have photovoltaic solar modules under them absorb the energy from the sun during the day to create a spectacular light show from sunset to sunrise. Along the western side are smaller installations of the big circle which represent the other planets of the solar system.

Another quirky and unique installation by Croatian architect Nikola Bašić is the Sea Organ situated on the western end of the Riva. While the monument to the sun focuses on light, the Sea Organ is all about sound. A system of 35 underwater pipes and whistles (labium) have been cleverly set beneath the perforated stairs that extend for 70meters. The whistles play seven chords and five tones and produce a haunting melody when the movement of the waves forces air through them. It adds to the magic of a Zadar sunset.

The largest church in all of Dalmatia is the Zadar Cathedral also known as the Cathedral of St. Anastasia. The Romanesque three-nave church was constructed during the 12th and 13th centuries but its origins date back to the 4th and 5th centuries. Its beautifully decorated facade, two impressive rose windows, and a lavishly carved choir are things to look out for. To avail of some fantastic views of the city and the sea climb up to the bell tower.

One of the most striking images of the ancient city of Zadar is the undisturbed layout of the Roman Forum near St. Donatus Church. The forum, the largest in Croatia, was commissioned by the first Roman Emperor Augustus between the 1st and 3rd century AD and became the center of civic life. A violent earthquake in the 6th century caused massive destruction to the buildings surrounding the forum. Only the original pavement and stairs are intact today. Other remains include altars and one intact Roman column which was used as a pillar of shame during the Middle Ages.

Lying to the west of the city is the Monastery and Church of St. Francis of Assisi, the oldest Gothic church in Dalmatia. Dating back to the 13th century, the monastery served as a focal point of religious life in Zadar. The church is historically important as the sacristy, located after the choir, is where the Republic of Venice officially handed over Dalmatia to the Hungarian-Croatian king in 1358. Highlights to the church include a 16th-century painting of Christ by Jacopo Bassano and a 12th century painted wooden crucifix.

This multifunctional space located on 5-Wells Square is very popular with Zadar’s residents and visitors, akin to a closed city square. The building which houses various events and activities served as an important Venetian warehouse in the 17th and 18th centuries. Concerts, exhibitions, fashion shows, parties, and dinners are held here. It also has a lounge bar, restaurant, and tourist information center.

The Benedictine monastery and church dedicated to Saint Mary was founded by the noblewoman Čika (who later became a nun) in the 11th century. Her daughter also entered the monastery as the successor of Čika and was responsible for the building of the monumental tower in the 12th century. The bell tower was named after its benefactor the king Coloman of Hungary. Remains of frescoes dating back to the 12th century can be found inside the chapel as well as decorative motives from 1744. The Allied bombing during the Second World War severely damaged the church which was rebuilt after the war. The monastery beside the church houses the Museum of Church Art and has a fascinating collection of ecclesiastical artifacts.

The Museum of Ancient Glass is definitely worth a visit, solely to marvel at some of the glassware that has survived through the centuries despite the earthquakes in the region. There are thousands of objects displayed at the museum which is housed in the 19th century restored Cosmacendi Palace. Glassware from the Roman era such as goblets, jars, and vials, have been retrieved from archaeological sites across Dalmatia and even from Roman cemeteries. It is the largest collection of its kind outside Italy. Visitors can also watch glassblowers at work every day between 10 am and 2 pm.

One of the best places in the city to ‘people watch’ is the aptly named Narodni Trg (People’s Square) near the late-Renaissance City Guard building. Right from the Renaissance period, the square has been the center of public life. Evidence of this is visible in the many important buildings that flank the square like the City Loggia and City Hall Building. There’s a constant buzz of activity from the bars and cafes that are a part of the square.

The baroque 17th-century church holds one of Zadar’s most revered treasures, the mummified body of Saint Simeon. The beautiful cedarwood sarcophagus in which the saint’s remains are kept is located over the main altar. Considered a masterpiece of medieval art because of the expert craftsmanship, it is now protected by UNESCO. Legend has it that the stunning sarcophagus was commissioned by queen consort, Elizabeth of Bosnia, between 1377 and 1380 in atonement for the crime of trying to steal a piece of the saint’s finger. A reclining St. Simeon is carved onto the lid while the rest of the chest is covered inside and outside with a thin lamina of 240kg of pure silver and some gold.

This square that was built in 1574 derives its name from the five wells that are lined up in a row. The square was built over an existing moat during the Venetian rule with a large water cistern and ornamental wellheads that supplied the city with water until 1838. Also visible near the square is the Captain’s tower against the city walls, the only surviving tower out of ten similar ones. One can enjoy beautiful views of the city from the belvedere of the tower. The oldest park in Zadar, built on top of the Grimaldi bastion is also accessible from the square. Today the square is a popular venue for various events and concerts.