Top 12 Things To Do In Zakopane 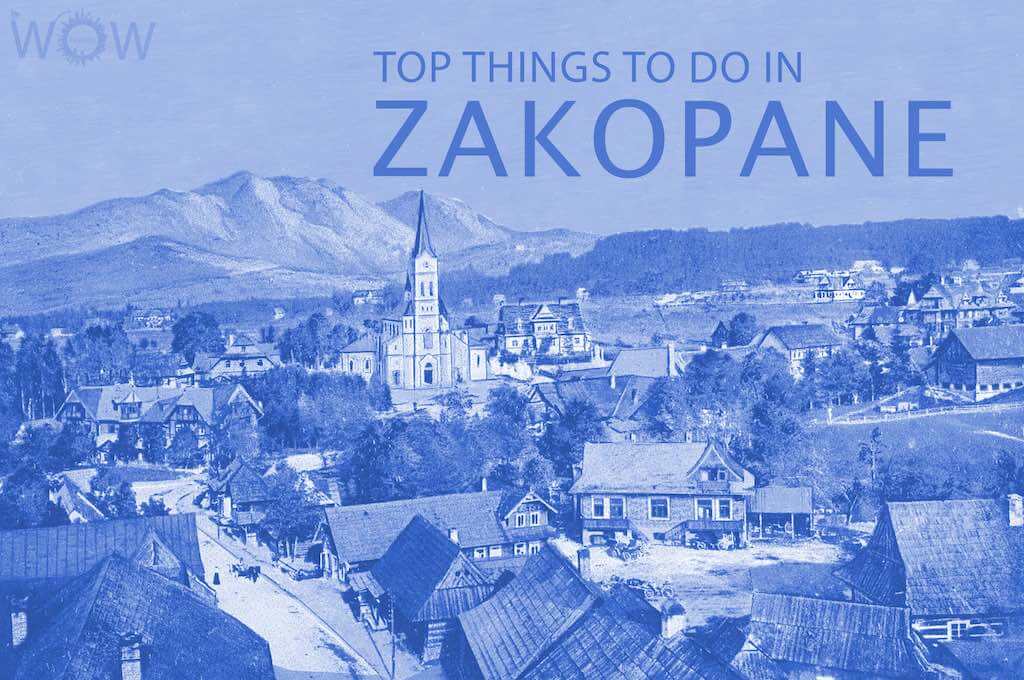 Zakopane often referred to as the ‘winter capital of Poland‘ is a town located in the extreme south of the country at the foot of the beautiful Tatra Mountains. Its location makes it a preferred destination for hiking, skiing, and tourism. Zakopane was only a small village in the mid 17th century with only 43 inhabitants. The growing mining and metallurgy industry saw a substantial expansion of the region. During the First World War many poets, artists, and writers found refuge in the beautiful environs of Zakopane. They extolled the beauty of the Tatras in their paintings and writings which attracted more and more visitors to the region. Today, Zakopane is a bustling tourist center with visitors converging on the beautiful town in summer and winter. The beautiful walking and riding trails in summer, coupled with some excellent skiing facilities in winter ensure that the time spent in Zakopane is extremely rewarding.

The main street of Krupowki is the pulse of Zakopane as most of the activities are centered around here. The street is over a kilometer long and is lined with a wide selection of wooden Zakopane-style shops, restaurants, and hotels. The lower end of the street is a great place to pick up a souvenir. This vibrant street is always teeming with life as visitors, shoppers and street performers converge on it through the day. Krupowki hosts the annual Highland Folklore International Festival and the street is transformed by colorfully dressed artists from all over the world.

The starting point for the Gubalowka Hill Funicular is just north of Krupowki. The line to the popular mountain was opened in 1938 but was rebuilt in 2001 with new carriages and stations. It takes about 3 1/2 minutes for the train to reach the top of Mount Gubalowka but the short ride will provide you with some spectacular scenery of the town below.

The Gubałówka Range is a popular destination for visitors because of the spectacular views from the top. The mountain is also easily accessible from Zakopane by the funicular or on foot and can get quite crowded at the top. There are numerous food stalls and other activities at the top, like pony rides and mini bobsleigh skis.  One can also enjoy a historical walk around the tiny settlement located at the top of the hill at an altitude of 1120 meters.

Church of Our Lady of Czestochowa

This is the oldest church in Zakopane. Built in 1847 it’s not surprisingly referred to as ‘The Old Church’ by locals. The church was originally called the church of Saint Clemens in honor of the founder of the church, landowner, Klementyna Homolacsowa, but after the First World War, the name was changed. Although there is nothing dramatically spectacular about the church, the old world charm of the simplistic wooden structure and carvings is very appealing. The main altar of the church was created by renowned folk sculptor Wojciech Kulach-Wawryncock. There are also popular legends about the first rector of the church Jozef Stolarczyk who allowed the reluctant highlanders to smoke their pipes during mass.

The Old Graveyard in Zakopane has some of the most famous Polish personalities interred in its grounds and is one of the country’s most beautiful burial places. Some of the graves in the cemetery feature amazing wood-carved headstones and metal work that is typical of the Podhale region. Its name is partly derived from the benefactor Jan Peksa who donated the land for the cemetery in 1848,  and also for the brook that runs beside the cemetery. The cemetery was initially a regular cemetery where people from all backgrounds were buried here but in the 1920s only notable Zakopane citizens and those who have family graves can be buried here.

The emerald green Morskie Oko is the largest lake in the Tatras, situated nearly 1400m above sea level, deep within the Tatra National Park.  The lake was once called Rybie Jezioro (Fish Lake) because of the amount of fish found in the lake, quite uncommon to the other lakes in the region. Even today one can see trout swimming around in the clear waters of the lake. It is now referred to as the Eye of the Sea because of a local legend that says that the lake was once connected to the sea by an underground passage. The lake can be accessed by foot or a horse-drawn cart. On foot, it is a 2-hour walk to the lake from the nearest road.

Wielka Krokiew is one of the biggest ski jumps in Zakopane built on the slope of the 1378m high Krokiew mountain. The jump was inaugurated on March 22, 1925, for the jumping competition in which Stanislaw Gasienica-Sieckza became the first winner and record holder. The runway was altered slightly for the 1929 World Ski Championships. A number of ski jumping World Cups have been held here since its inauguration. The hill, however, lost its FIS homologation in 2000 but regained it in 2017 after a big renovation project.

Translated as ‘The Nose’ this mountain in the Tatras is another popular destination during the summer and winter. The beautiful scenery and fairly easy trails make this a good hiking destination in the summer. In the winter, the slopes attract skiers from all categories. The best amount and quality of artificial snow is said to be found at Nosal. There are a number of ski schools in the area which are highly recommended for beginners of all age groups.

The Villa Koliba was built between 1892 and 1893 and is the first building ever erected in Zakopane style. It was designed for Zygmunt Gnatowski by the renowned Polish painter Stanislaw Witkiewicz who invented the architectural style. The villa is currently the Museum of Zakopane Style and the five rooms in the original part of the villa have been arranged like Gnatowski would have had them when he lived there.

The Hala Gasienicowa is a beautiful meadow located in the northern part of the Gasienicowa Valley which was once a popular grazing ground. The breathtaking surroundings with the mountains juxtaposed by the verdant valley have probably been captured on camera innumerable times. The valley was originally called the Valley of Seven Ponds and later the Valley of Five Ponds. The present name comes from the large Gasienica family who owned the land in the 17th century. A large popular hostel ‘Murowaniec’ is located on the meadow with several other houses including the Observation Station of the Institute of Geography.

Giewont which is located on the Western Tatras is another summit of the range which is extremely popular with tourists and the local Highlanders. The profile of the mountain is said to resemble a sleeping knight. A local legend says that the mountain is actually a Sleeping Knight who will rise to protect the nation when it is in extreme danger. A 15-meter high cross made of jointed steel was erected at the top of the mountain by the Highlanders in 1901. The mountain is not too difficult to climb but the last stretch along a chained pathway can be challenging even for the best. Once at the top the breathtaking view makes up for the effort of getting there.

The Tatra National Park located in the Tatra Mountains is considered to be among the world’s 30 recommended national parks. It is renowned for its unique flora and fauna and also for the amazing landscape. There are several mountain lakes, streams and about 650 caves in the park. The national park is a joint effort by Poland and Slovakia to preserve the fauna and flora of the region. The Tatra Mountains extend to 750km, but only a fifth of them lies in Poland (150sqkm). The national parks in both countries were jointly given the status as a transboundary biosphere reserve by UNESCO in 1992. There are more than 270km of hiking trails within the Polish side of the park which cater to all kinds of hikers from the novice to the expert. Some parts of the Tatras are accessible by funicular, chairlifts and cable cars.