Top 5 Things To Do In Guyana 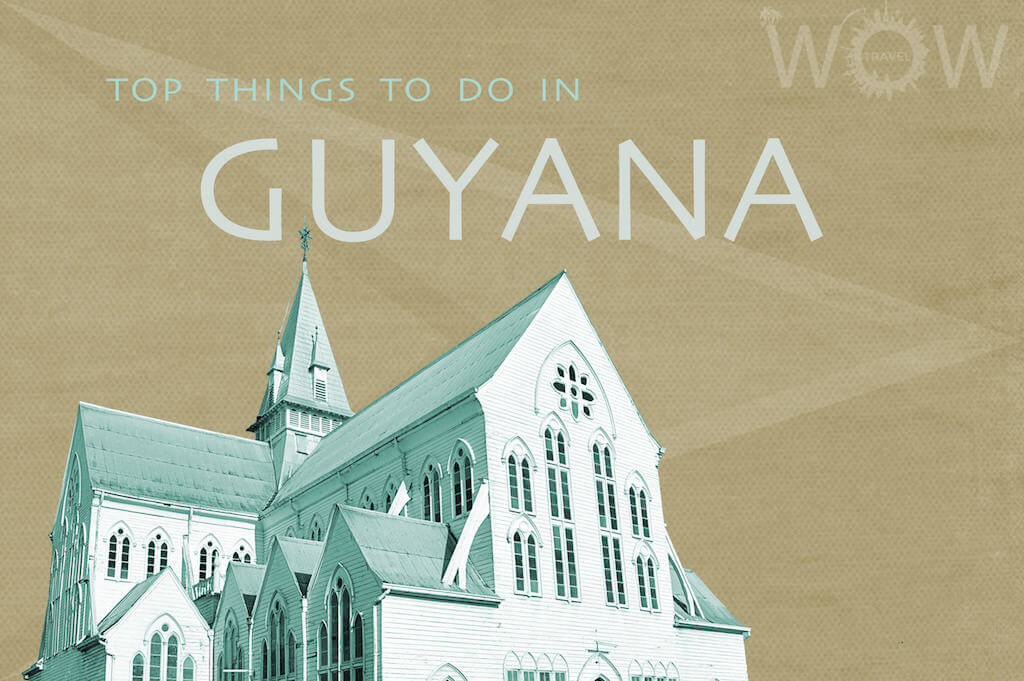 Guyana is a sovereign state, located on the northern coast of South America. Culturally, it is considered part of the Anglophone Caribbean. It sits alone on the continent of South America as an former British colony, sharing a Caribbean flavor where English is the first language and cricket the national sport. It is an untravelled country with scenic landscapes, sandy beaches and magnificent jungle with rich biodiversity (Jaguars, giant otters, tapirs and over 800 bird species). Guyana is a perfect spot for adventurers, explorers and people who wants to visit a less tourist country. Check out our Top 5 Things To Do In Guyana.

Georgetown is the capital city of Guyana, it is known for its British colonial architecture, including 19th century stilted wooden houses line the streets, old Dutch canals line the roads and tall, painted-timber St. George’s Anglican Cathedral, the world’s tallest wooden church. Georgetown is famous for many things such as trendy and fashionable shops, distinguished restaurants, museums and lively nightlife. The charm of the city lies in historic and old-fashioned monuments. Other popular places to visit are the Parliament Building, the City Hall, the Light House, Demerara harbor Bridge (the longest floating bridge in the world) and the famous Stabroek Market.

Kaieteur Falls is one of the tallest and most powerful waterfalls in the world and the largest single-drop waterfall by volume in the world. Located in Kaieteur National Park, Guyana, the falls’ impressive combination of height and force make it a fearsome sight. Travellers generally visit the falls in small groups, and therefore the area is never crowded, allowing tourists to marvel at the rugged landscape and sense of deep isolation. Roughly four times taller than Niagara Falls, this single drop waterfall is a dramatic facet of the Potaro River – a wide, coffee colored flow that runs for  225 km (140 miles). Source: beautifulworld

If you want to understand a country’s lifestyle and traditions, you should visit the Macushi tribe at Surama Village. It’ll give you an indelible insight into Amerindian culture.

Shell Beach offers a great opportunity to view one of earths largest reptiles: the leatherback turtle. These giants can weigh up to 750 kg and are a sight to behold. Shell beach is one the last wild beaches of this word with only a few small Amerindian settlements surrounded by mangrove and rainforests, where jaguars still prowl the beaches at night.

The Iwokrama Forest is a vast wilderness of nearly one million acres, one of the four last pristine tropical forests in the world. It is a protected area and homeland of the Makushi people who have used the forest for generations. Come and retrace the footsteps of the Makushi people, wander around extensive trail system and discover the unforgettable flora, faun. The Iwokrama Forest is an extraordinary destination for naturalists, birders and anyone seeking an authentic retreat to the jungle. Source: iwokrama.org