Top 10 Things To Do In Mostar 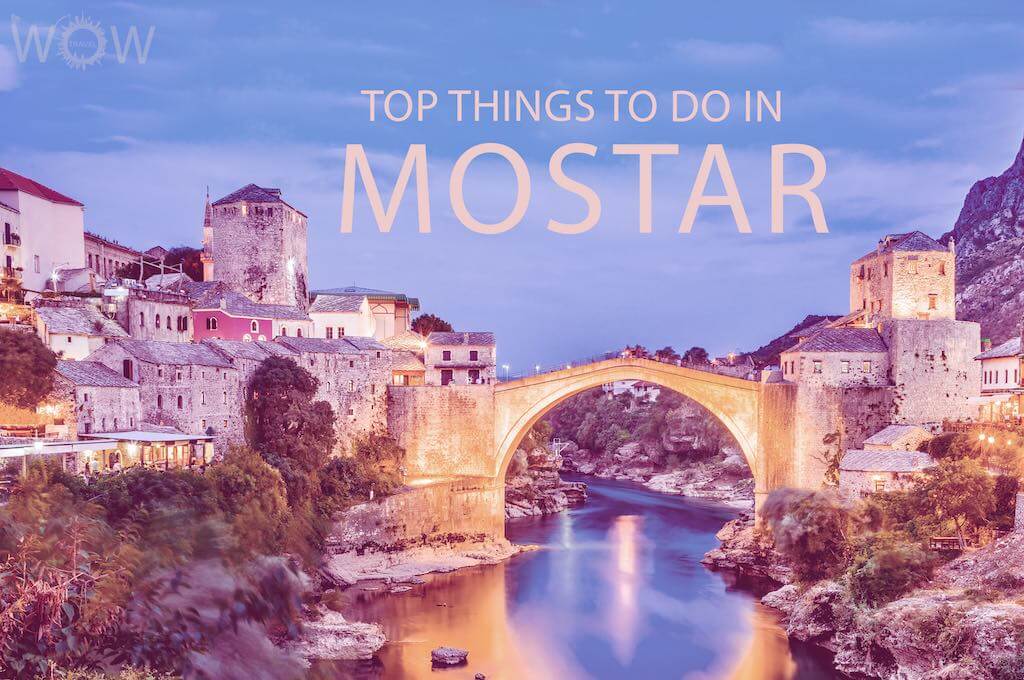 Mostar, also known as the “City of Sunshine,” enjoys a nice climate. It’s a blend of the old and the new. Tucked into a valley on the banks of the Neretva River, the beautiful city put behind its war-torn past. Unsurprisingly, it welcomes tourists with historical landmarks. Certainly, you’ll find plenty of things to do in Mostar. Small, compared to quite a few other countries in Europe, Mostar offers a range of places to stay. Notably, these include villa hotels, luxury apartments, hostels, and guesthouses. Enjoy a range of choices on day trip to Mostar from your accommodation.

Above all, the choices suit all tastes and budgets. On a tight schedule, with not enough time to stay overnight in Mostar? Luckily,  great day trips abound. Plus, look out for spiritual centers, natural beauty, and Bosnia-Herzegovina culture.

Mostar Bridge bears several names. You may hear it called Old Bridge or Stari Most, as well. The old stone bridge dates back to the Ottoman rule. Actually built in the 16th-century, it’s a fine example of Islamic architecture. Restored to its former glory, the  Croatian forces destroyed it during the Bosnian War. That took place in the 1990s. Here, the bridge makes for a great photo opportunity. Impressively, the rugged mountains sit as a backdrop. Above all, Stari Most has an annual bridge-jumping competition, as well. In fact, discover the wonders of this UNESCO-listed site and others in with the Mostar and Kravice Waterfalls tour.

Now restored, The 17th century Koshkin Mehmed Pasha Mosque is the  2nd-biggest mosque in the region. Actually, it’s easily identifiable by a blue dome. Find it quite close to Stari Most. Invigorating, the climb up to the top of the narrow minaret delivers stunning views. Certainly, it figures in the list of best things to do in Mostar. With views of the surroundings like that of the bridge and the mountain, the mosque makes for an interesting visit.

Well-preserved, this Turkish residence dates back to the 17th century. Biscevic House reveals life during the Ottoman rule. Enchanting, cobbled pathways lead to the sprawling house. Nowadays, it showcases a collection of artifacts and traditional costumes. Definitely, the ancient items and furnishing captivate interest. Plus the furnishings, nice ceramics, and beautiful gardens make for a memorable experience. Certanly, it’s ideal for a quick day trip to Mostar.

If not time-pressed, go to the charming Old Bazaar area. There, find original cobbled streets lined with 16th-century buildings. Notably, handmade items, apparel, souvenirs, and food on display give it the look and feel of a Middle Eastern bazaar! There, quaint workshops sit next to charming restaurants.  And, they offer a tasty choice of local food. Thus, the Old Bazaar deserves a place on your list of things to do. Browse, and soak in the local ambiance.

PoKriva, also known as the Crooked Bridge is very old. In fact, it outdates the Stari Most. Actually built in 1558, its sits on the Radobolja River. Extremely scenic, it makes for pretty backdrop for beautiful photos. Given its similarity to the much larger Stari Most, comparisons between the bridges become inevitable. In addition, both make for different scenic images. Definitely, make it a must-see when in the city!

On your list of what to do in Mostar in one day, save a spot for the bell tower. Soaring over the city, it provides stunning views of the landscape. Making it easier, hop into the elevator. Handily, it takes you up halfway to the top. Unfortunately, the Franciscan church next to the bell tower, remains unfinished. Actually, It was intended as a replacement for the original basilica ruined in the war.

One of the top things to do in Mostar, a rafting trip on the Neretva River won’t disappoint. Exciting, you won’t lack for adrenalin rushes. In fact, the tours offer varying levels of difficulty and length. Often, these include lunch and swimming in the rapids. Opting for a Mostar city rafting tour gives you a unique perspective of the city. Usefully, the tour company provides all you need. And, rafting takes place under the care of expert instructors.

Splendidly, this 16th-century mosque was restored after the Bosnian War. Karagoz Bey is the answer for what to do in Mostar. Actually, considered the largest in the region, expect to lose track of time exploring. Notably a fine example of Ottoman architecture, this mosque sits in the heart of the city. In fact, it’s believed to have been designed by renowned architect Sinan.

Lying on the Trebizat River, this waterfall should be on your list of things to do. Less than an hour’s drive from the city, enjoy a half day trip. Usually, it’s in full spate during spring. Definitely, the falls should be included in a day trip to Mostar. Picnic areas, swings, and a campsite close by, makes for adventure. Great fun, swimming in the lake at the base of the waterfall is popuar. However, the spot gets a wee bit crowded during peak summer season.

Set on a steep hill, the ruins of Blagaj fort make for a spectacular sight. Located 20 minutes from Mostar, evidence suggests the fort existed in two parts. That was back the medieval age. Now, it’s listed as a national monument. Worthwhile, the viewpoints on the walls offer stunning views of the landscape. Of note, a guided tour lets you take in the cultural highlights of the region. These include the Enchanting Herzegovina Adventure.