11 Annual World Festivals Worth The Trip 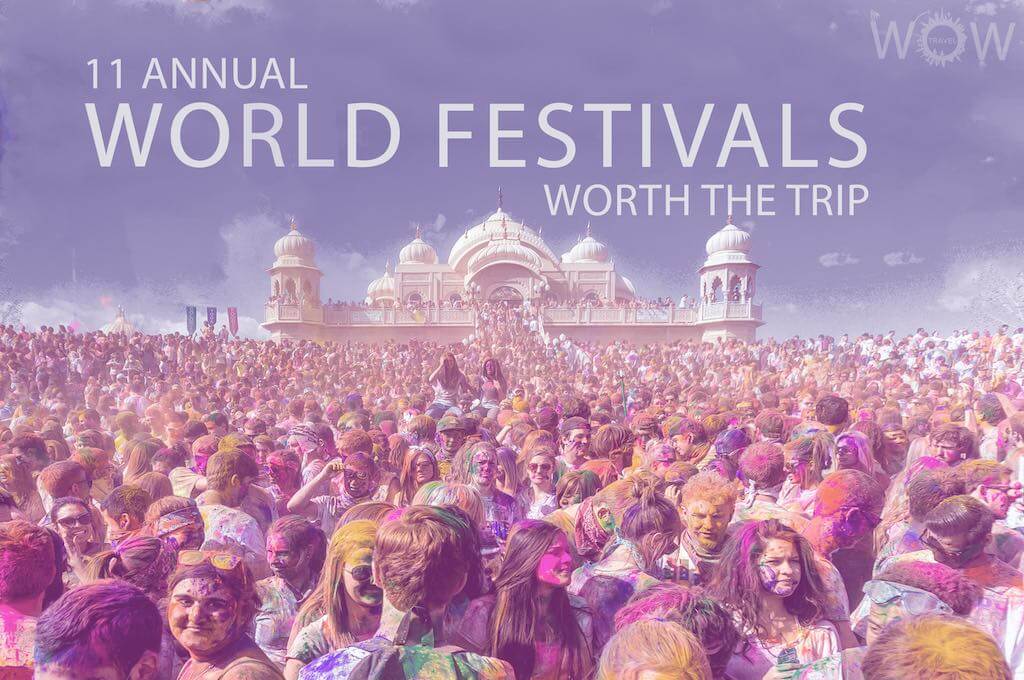 Who doesn’t love a great party, especially when it’s celebrated outdoors on a huge scale! Festivals around the world have grown from small community gatherings to some of the most happening events in the world.  Most festivals have a religious angle to them but there are many that have their origins in folklore and agriculture, celebrating the harvest. While some celebrations are carried out on a small scale there are festivals around the world that are renowned for their massive celebrations, festivals which lure travelers to that part of the world, to experience the celebrations first hand. We’ve picked out some of the most outstanding of these festivals which will definitely make a trip to the region during that time of year even more memorable.

Visitors to the village of Pingxi in Taiwan on the last day of the Chinese New Year, witness a spectacle so beautiful, it’s sure to leave a lasting impression. Thousands of lanterns light up the night sky as paper lanterns with wishes written on them are released into the sky. The traditions of releasing lighted lanterns into the night sky began in the mid-19th century when the villages were overrun by bandits. The lanterns in the night sky was a message that people in the village were safe. Today Pingxi is the only place in Taiwan where sky lanterns are permitted as the mountains and water that surround the village prevent the lanterns from straying too far.

Touted as the biggest outdoor party in the world, the carnival of Rio de Janeiro held just before Lent begins is something that needs to be seen to be felt. The carnival of all carnivals which had its origins in 1723, attracts more than two million visitors every day. Samba music which is the mainstay of the carnival was introduced in 1917. The carnival is characterized by floats, revelers and performances by the various samba schools.

The Festival of Colors is celebrated by Hindus all over the world but on the grandest scale in India, where it originated. The streets become a riot of color as people with water guns and water balloons begin spraying and pelting each other with color or smearing powdered color on friends and relatives. Like most of the Hindu festivals, Holi marks the triumph of good over evil. It also signals the end of winter and the fertility of the land. A day before the celebration of color, people gather around a bonfire to burn their sins along with the demon Holika who symbolizes the fire.

While Holi is a festival of color with colored water being sprayed on everyone, Songkran in Thailand is a festival of water. Water is symbolic of purging out the bad and starting a new beginning.  If you’re in Thailand during the New Year which falls in the month of April, be prepared for a huge water fight that lasts three days. People take to the streets armed with hoses, water guns or water bags and have the time of their lives on what is one of the hottest days of the year.

Mardi Gras, which means Fat Tuesday is one of the biggest events in New Orleans, attracting visitors from far and wide to witness and be a part of a series of festivities beginning two weeks before Ash Wednesday. Several parades take place every day but the most spectacular ones happen during the last five days of the festival, with the biggest parties happening on Bourbon Street. The festivities are brought to a close on Shrove Tuesday where feasting is at its maximum just before the season of fasting begins. Mardi Gras is said to have been celebrated in Louisiana as far back as 1699 as part of a Catholic observance with balls and carnivals being added over the years.

On June 24th the ancient Inca ruins of Sacsayhuaman come to life with the celebration of the sun. People from the city come out in their traditional dresses to feel one with their rich past. The festival of Inti Raymi has been celebrated in Peru’s Cusco since the time of the Incas. During the Spanish conquest, the locals were banned from carrying out these celebrations but they were revived in 1944. The celebration begins early in the morning from the Coricancha which was one of the most important Inca buildings. The Inti Raymi flag is raised and after a mass in the cathedral, the festivities gradually move to the main plaza and then culminate at the historic Sacsayhuaman.

Mongolia’s Naadam Festival is so steeped in history and tradition that it has been designated as part of UNESCO’s ‘Intangible Cultural Heritage of Humanity.’ This annual celebration of athletic prowess held in July, dates back to the time of Genghis Khan. Although on the outside Naadam may seem like a whole lot of fun and games, it is deeply rooted in the spiritualism of the region. From being a religious festival to one of royalty, the festival was forced underground when the communists seized power in 1921. Today the Naadam festival has been revived with a new meaning, the celebration of Mongolia’s independence from China. The festival focuses on three main sports, archery, horse-racing and wrestling in the true Mongolian style. Other highlights include traditional dances and music.

La Tomatina is your chance to make tomato puree on a massive scale. Celebrated in the town of Bunol in Valencia, the festival involves a massive tomato fight, where tons of overripe tomatoes are squashed and thrown at participants. The festival which began quite by accident in 1945 when a few friends got into a fruit battle over a small mishap at the parade, has since grown into one of the most popular ‘food fights’ in the world. Held on the last Wednesday of August, people from all over the world travel to Bunol to be a part of this unique festival which involves dancing, tomato streaked slides and a tomato shower.

One of Scotland’s most unique festivals is the Up Helly Aa held in the last Tuesday of January prominently in Lerwick and other parts of the Shetland Islands. The festival celebrates Shetland’s Viking past, an improvised version of the ancient Norse festival of Yule, to the rebirth of the sun. Held over 24 hours, the festival touted as Europe’s largest fire festival is characterized by marches, performing arts and a torch-lit march which culminates in the burning of a replica of a Viking ship using the torches from the march. Once the galley has been burned down, the ‘guizers’ sing the traditional Norseman song and then embark on a night of drinking and dancing.

Innumerable pints and pitchers of Oktoberfest Beer served by beautiful Bavarian waitresses is what the Oktoberfest is all about. Begun in 1810, to celebrate the marriage of Crown Prince Ludwig of Bavaria to Princess Therese, the extended five-day-long festival was such a hit that people decided to have a celebration every year. Today the festival has been extended to 16 days in Munich where it all began. A 12 gun salute at noon followed by the tapping of the first keg by Munich’s mayor marks the beginning of the festival which is characterized by parades, music, and beer. Seven million liters of beer are consumed over the course of the festival that begins in the last two weeks of September and goes on till October. Make your visit even more festive by staying at one of the Top 11 Gay Friendly Hotels in Munich.

Although Dia de los Muertos may seem like another version of Halloween, it has nothing to do with the festival at all. Despite people being dressed up in spooky costumes, the festival has a more somber tone to it with family and friends coming together to remember those who have passed on. The two-day event coinciding with the Catholic holidays of All Saints Day and All Souls Day (1st and 2nd November), is a blend of remembrance and festivities. The festival which traces its roots to the time of the Aztecs 3,000 years ago is a blend of Christian traditions and Hispanic rites. People visit family graves and build altars with the former possessions and favorite dishes of the deceased. The cemetery is transformed by singing and dancing to mariachi bands.