20 Small Towns In Europe You Must Visit 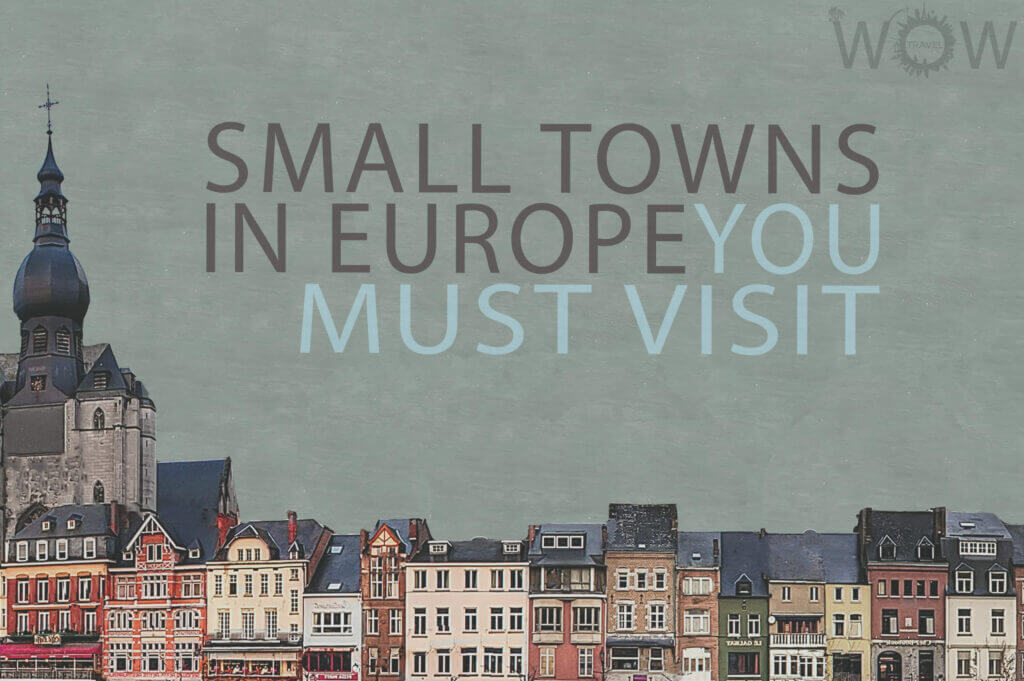 Traveling to a somewhat more obscure town can be as great of an experience as hitting the capitals and bustling metropolises of Europe. Besides the regular popular destinations there are plenty of awe-inspiring little towns all over the continent that are worth exploring. If you are dreaming of visiting one of those picturesque little European towns filled with old-world charm and incredible scenic beauty, this article is for you. We have selected very carefully a list of the 20 Small Towns In Europe You Must Visit.

Pučišća is a beautiful town arose from stone in a deep cove on the northern coast of the island of Brač. Nicely built stone houses with paved white roofs give the place its charm. Pučišća has always been known for its culture of stone masonry. The harmony and homogeneousness of the plebeian houses, the Renaissance palaces and Baroque buildings made from the white stone of Brač leave every visitor breathless.

Eze is a medieval village overlooking the Mediterranean Sea. The ancient fortified village is still crowned with the ruins of its 12th-century fortified castle (torn down in 1706), sitting on a narrow rocky peak. The castle grounds host the well-known Jardin Exotique, and from the top (429 meter / 1407 ft) you will have a spectacular view of the coast. Source: beyond.fr

With glorious beaches, a warm atmosphere and fine Victorian houses painted in sugared almond colors, Tenby is probably the most iconic seaside town in Wales. Tenby’s hilltop position led to its early settlement as a Welsh stronghold, which was replaced in medieval times by a Norman Castle and walled town. Part of the town walls survive to this day.

If you are looking for a “get-away-from-it-all” kind of place, where very few have been, then you should come to Reine. A fishing village in Nordland county, Norway. It is located on the island of Moskenesøya in the Lofoten Archipelago. With red and white fishermen’s huts dotting the shoreline and surrounding peaks of granite shooting out of the Reinefjorden, the village has earned a reputation as one of the most beautiful villages in the world.

Located on the center of the Portuguese coast, just a short drive from Lisbon, Sintra is a picturesque town, steeped in history and offers some of the most exquisite natural and architectural sites in the country. This slightly cooler climate attracted the nobility and elite of Portugal, who constructed exquisite palaces, extravagant residences and decorative gardens.

Albarracín is a glorious hill-top town in Southern Aragon, Spain. It is the former capital of a Moorish kingdom (Taifa) and has preserved all its Islamic and mediaeval flavor. Its old quarter has the Property of Cultural Interest designation with its medieval streets and tall, balconied houses. Albarracín is one of the most isolated places in Spain, it is a half-hour drive into the mountains from Teruel, the only provincial capital in peninsular Spain without direct train service from Madrid.

Manarola is a small fishing town in northern Italy. It is one of five tiny towns that are all connected by a walking path, in a section of the Italian Riviera known as Cinque Terre. The village of Manarola is surrounded by vines and is situated along a stream.

Located in the middle of a internationally popular region that is best known for its natural rock formations. Goreme is a special town in Turkey that was first built by the Romans and was carved into the hard rock. A UNESCO World Heritage site, Göreme valley and its surroundings contain rock-hewn sanctuaries that provide unique evidence of Byzantine art in the post-Iconoclastic period.

Located at the south-western shore of the Hallstätter Lake in upper Austria, Lovable Hallstatt is a small town built between colossal mountain and a swan-ruled lake, with a waterfall ripping furiously through its middle. The houses of the narrow village are located directly at the lake, and till the end of the 19th Century Hallstatt could only be reached by ship or narrow paths.

Giethoorn is the Venice of the Netherlands. This village of 2,500 inhabitants located in the province of Overijssel is best accessed by foot, bicycle or canoe because  Giethoorn does not have roads and cars are prohibited. All the houses are lined up along the canals surrounded by beautiful nature.

Colmar is a commune in north-eastern France. The town is situated along the Alsatian Wine Route and considers itself to be the “capital of Alsatian wine”. Essentially traffic-free city center, Colmar is a fantasy of steep pitched roofs, pastel stucco, and aged timbers. This charming town was an important marketplace as well as a center of art and learning in the 13th century. Make the most out of your vacation by choosing to stay at one of the 11 Best Hotels in Colmar.

The Swiss town of Binn lies in a small, secluded Alpine valley at the base of zigzagging peaks sporting countless shades of green. Even today, the 16th-century stone bridge leading into the village of Binn bears the load of goats and hikers, not cars and buses

Cochem is a traditional German town with half-timbered houses and an exceptionally scenic location on the Mosel river in Rhineland-Palatinate, Germany.

Annecy is one of the most popular towns in the Alps, and is an attractive setting with woods, mountains and the Lake d’Annecy close to hand. The town is found in the Haute-Savoie region of eastern France, on the shores of Lake Annecy, 35 km (22 miles) south of Geneva. Annecy is situated at the northern end of the lake of Annecy. It occupies a strategic location on routes between Italy, Switzerland and France. Make your visit unforgettable by staying at one of the 11 Best Hotels in Annecy, France.

Dürnstein is a small town on the Danube river in Lower Austria. Durnstein is well-known for its wineries and is one of the most popular tourist destinations in the Wachau region.

The fortress town of Palmanova is located in northeastern Italy, close to the border with Slovenia. It is among the more important and better preserved examples of late Renaissance military architecture.

Český Krumlov is ne of the oldest villages in Czech Republic.  It is a pearl of Renaissance architecture and a place where the sumptuousness of the local castle, maze-like alleyways, richly decorated coats of arms of burghers houses, and wonderful floral gardens are harmoniously interwoven. at the same time, it boasts medieval pubs, ale-houses, galleries and graphite mines. Thanks to its unique preserved medieval core, Český Krumlov is included on the UNESCO list. Source: czechtourism

The best preserved medieval town in Germany, Rothenburg ob der Tauber fits the word romantic perfectly. Artists have long taken inspiration from the unique location of this medieval town whose skyline with its 42 gates and towers is quite unmistakable. Nestling amidst beautiful, unspoiled countryside and still with a largely intact walkable town wall with medieval fortifications surrounding the historic center, Rothenburg with its winding alleyways and artistic treasures is the ideal place to relax.

Bibury is a charming, typically Cotswold village and civil parish in Gloucestershire, England. Bibury was once described by William Morris (1834-96) as “the most beautiful village in England”, and in fact it is one of the world’s most picturesque villages.

Squeezed between the River Meuse and the high rocks that overlook it, Dinant is a little town along the Meuse River in the province of Namur. It is about 65 km (40 miles) south of Brussels. Its main features are the river, the imposing citadel high above the town and the Collegiate Church of Our Lady with its characteristic pear shaped bell tower. Stay at11 Best Hotels in Brussels then have a day or two trips to Dinant.