11 Incredible Abandoned Islands Around The World 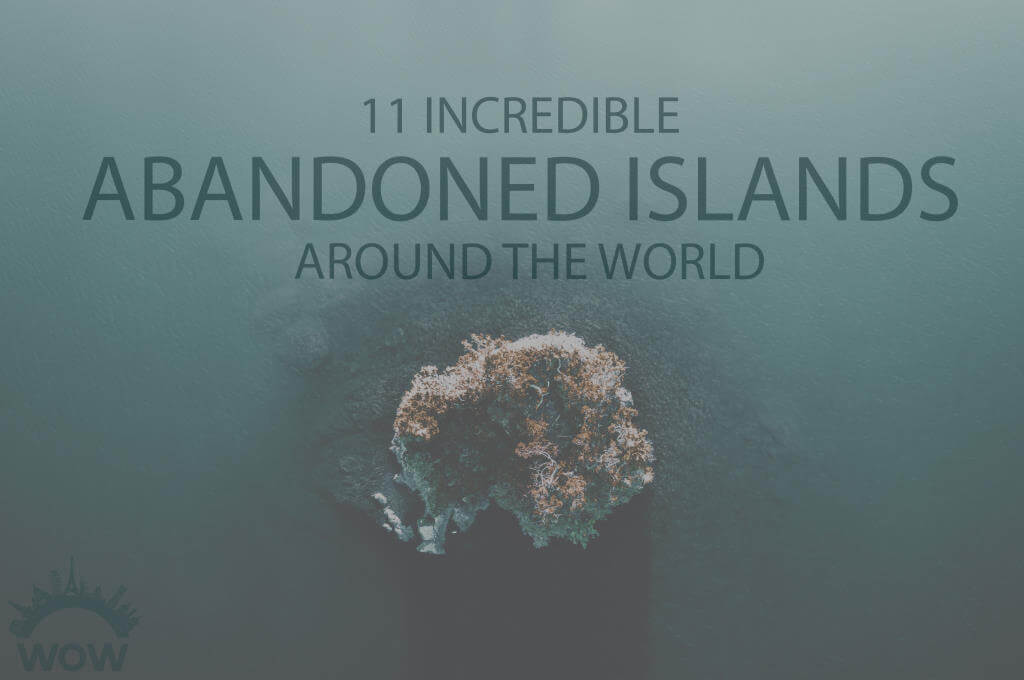 The theme of being stranded on abandoned islands has inspired many novels and films. These include the famous TV series Lost and the riveting and heart-wrenching Tom Hanks movie Cast Away. When it comes to writing, the quintessential deserted island story is the famed 1719 novel Robinson Crusoe by Daniel Dafoe. Frozen in time and with nothing but fascinating stories to tell, many of these abandoned or ghost islands have taken on an enticing and eerie second life in their disrepair and desertion. The best abandoned islands in the world, including the US, have intriguing stories behind their decline. Some of these islands have never been occupied, while others were deserted a very long time ago. Unlike the atypical tropical island paradise, nature has been thriving on these islands in its wild and natural state. To that end, here are the 11 best abandoned islands in the world.

Clipperton Island is one of the best abandoned islands in the world. The island is actually a coral atoll located west of Guatemala and south of Mexico in the Pacific. The French first claimed it, after which the Americans took over and mined it for guano. Mexico took possession in 1897 and then allowed a British company to mine guano. In 1914, the Mexican civil war cut off the supplies and transportation for the island’s 100 or so residents. Finally, in 1917, the last surviving islanders, which were three women, were rescued and subsequently evacuated. Then, the ownership went back to France, which was manning a lighthouse on Clipperton Island. After World War II, everyone abandoned the island, with only a few scientific expeditions to the atoll taking place thereafter.

This barren coral atoll has small groves of palm trees and scattered clumps of grass, and most of the land is just a few feet above sea level. The shipwreck survivors who were marooned on the island in the past survived on water from Clipperton’s freshwater lagoons and coconuts.

Jaco Island in East Timor is one of the Top Things To Do In Timor Leste. The uninhabited and abandoned island has no permanent inhabitants as the locals consider it sacred land. That’s because two different seas, that is, the Timor and Banda seas, meet here. However, that doesn’t mean that it’s completely abandoned. Tourists still come to these islands on both day trips and even camping trips. What’s more, the local fishermen double as vendors to the tourists. Part of Nino Konis Santana National Park, Jaco’s coral reefs, turquoise waters, and white sand beaches are perfect for exploring this untouched paradise of the southern corner of Asia.

One of the most famous abandoned islands in the world is Gunkanjima, a.k.a. Hashima Island. Also known as Battleship Island, it’s one of the most Incredible Ghost Towns Worth Visiting in the world. This tiny island off the coast of Nagasaki in Japan was once the most densely populated place in the world. Today, it’s a ghost town that has been abandoned and completely uninhabited for more than 40 years. In the early 1900s, the Mitsubishi Corporation developed Hashima Island, which everyone believed to be (correctly) sitting on rich submarine coal deposits. From 1941 until the end of World War II, the tiny island was swarming with conscripted Chinese and Korean civilians and prisoners of war. The Japanese forced them to work and produce coal under very harsh and tough conditions.

What’s more, they were at the receiving end of brutal treatment as forced laborers under Japan’s wartime mobilization policies. Despite powering Japan’s industrial expansion, the city got the nickname “island without green” and is a major spot in today’s dark tourism map.

Palmyra Atoll lies some 1,000 miles south of Hawaii. It’s one of the most gorgeous abandoned islands in the US. It’s not only isolated but also an unorganized and uninhabited island officially. Palmyra Atoll is the ‘haunted island of the Pacific’ for more reasons than one, despite unspoiled waters and white sand beaches. During World War II, the United States military built an airstrip here, which has fallen into ruin. Today, the United States Fish and Wildlife agency administers the atoll. The Nature Conservancy owns Cooper Island, though. Palmyra Atoll has been used in popular culture as well. For instance, it was the setting for a 1974 double murder, which was the basis for the novel and a subsequent miniseries “And the Sea Will Tell.”

Not all deserted islands lie in the tropics. In fact, Devon Island, one of the largest abandoned islands in the world, lies in the Arctic. Belonging to Canada, Devon Island sits in Baffin Bay. But, that doesn’t mean that the island has always been uninhabited. In fact, people lived on Devon in the past. However, the last permanent residents left the island way back in the 1950s. That’s because the island’s topography is such that even astronauts have used it to train for future missions to Mars and test equipment.

If that wasn’t enough, the island is also home to a huge crater, the Haughton Impact Crater that measures more than 12 miles in diameter. The crater is, in fact, more than 23 million years! The austerely beautiful landscapes of Devon Island house bird and musk oxen species. Plantlife usually thrives in the lowland areas that have a microclimate with more hospitable conditions.

The westernmost of the Channel Islands off the coast of Southern California is San Miguel, which is 9,500 acres of windswept and wild beauty. With no water or services, the National Park Service quotes that a visit to this uninhabited island is “an exercise in self-reliance and preparation, and there aren’t any remedies for poor planning once you’ve arrived.” A four-hour skiff boat trip leads you to a beach with some of the most gorgeous scenery you’ll ever see in your life. For instance, the island and the surrounding waters have one of the world’s largest concentrations of wildlife. So, it’s home to more than 30,000 animals, including blue whales, dolphins, seals, peregrine falcons, and island foxes. It’s what makes San Miguel one of the most beautiful abandoned islands in the US.

Located in a far-flung corner of Seychelles, the Aldabra islands are some of the most beautiful abandoned islands in the world. Comprising four coral islands and surrounded by a coral reef, the Aldabra atolls (islands) encircle a lagoon. What’s more, it’s the world’s second-largest coral atoll too! In fact, the islands are home to the largest population of giant tortoises in the world, with numbers being around a whopping 152,000! Since there are no permanent human residents on it, Aldabra has long benefited from impressive conservation efforts. Furthermore, they have also successfully prevented attempts to build permanent settlements and military bases on the islands. It’s what makes the Aldabra islands one of the Top Things To Do In Seychelles.

The abandoned and uninhabited Elliott Key lies just a few miles off the coast of Florida. The narrow island strip sits right in the heart of Biscayne National Park, just south of Miami, and is the epitome of tropical-island seclusion. The key has a lush interior with hundreds of butterflies and birds species, meandering creeks, mangrove shorelines, and hidden lagoons. Go kayaking or snorkeling and discover more than 500 species of marine life, including manta rays, manatees, corals, and fish. During spring and winter, the island even offers guided trips and camping. So, if you’re looking for some good ol’ fashioned abandoned island action, then Elliott Key is perfect.

Henderson Island is one of the most fascinating abandoned islands in the world. Located in the South Pacific between New Zealand and Chile, the teeny-tiny island is one of the Pitcairn Islands and is an overseas territory of the United Kingdom. So, it’s also one of the Most Remote Islands In The World! Moreover, it’s virtually uninhabitable by humans, as it has no freshwater sources and steep sea cliffs. However, it has a wide variety of unique and wonderful animal species that you won’t see anywhere else on earth! For instance, unusual snails and butterflies, unique plant species, and as many as four endemic bird species call Henderson home. What’s more, the island also has huge, untouched phosphate reserves too.

Okunoshima Island, a.k.a. Japan’s Rabbit Island, Is The Cutest Place On Earth – and one of the most beautiful abandoned islands. Located off the coast of Japan, the island is overrun with rabbits, which, interestingly, aren’t a native species! At the same time, there are no human residents on the Island. Between 1929 and 1945, the island was the site of a chemical weapons plant that turned out poison gas for the Japanese Imperial Army. After the war ended, the Allies dismantled the plant and freed the laboratory animals, much like pulling many, many rabbits out of the hat! In fact, Japan did not speak of Okunoshima for years before the Ōkunoshima Poison Gas Museum opened here in 1988. A ferry departs for the island, which sees tourists interacting with the furry rabbits more than visiting the museum!

It’s hard to imagine that one of the Top Tourist Attractions In The USA would have an abandoned island, but it’s true. Disney’s Discovery Island is, without a doubt, one of the most intriguing abandoned islands in the world and in the US. The abandoned animal island was almost the park’s coolest attraction and opened as a lush zoological park housing many exotic animals. When the attraction shut down in 1999, the remaining fauna was moved to the new Animal Kingdom Resort in Disney World. Discovery Island, on the other hand, was simply left to nature, with its buildings deteriorating. Even today, the island remains abandoned and off-limits, with Disney having threatened to ban adventurers from all Disney properties for just setting foot here! However, some intrepid and brave urban explorers have infiltrated the island from time to time to snap pictures of what remains.