The 12 Most Remote Islands In The World 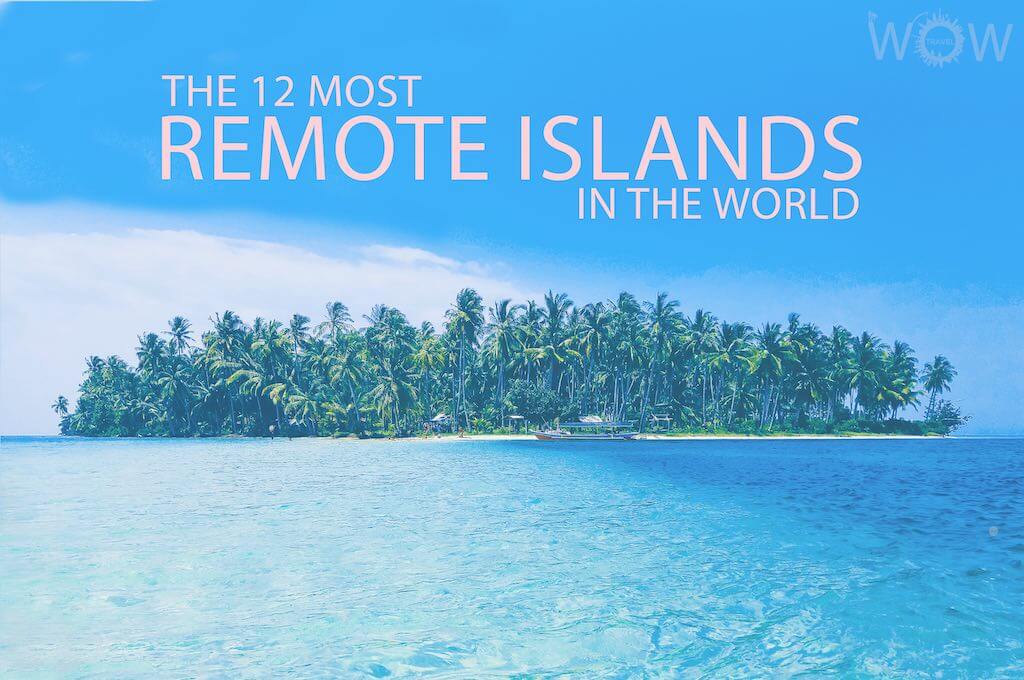 One of the more popular getaway destinations for travelers is a tropical island, characterized by lush green lands, surrounded by the sparkling blue sea, fringed with white or golden beaches. Other islands that lure travelers are those with a bit of mystery, islands with luxuriant jungles, verdant valleys and stunning peaks. However, in recent times with travel being so accessible, beautiful islands have often been overrun by visitors vying for that enviable shot of an undiscovered piece of paradise. For someone wanting to score those ‘brownie points’ on Instagram, the islands on our list are sure to garner those ‘likes.’ These islands are so remote that being able to snap a picture anywhere near them would be a feat in itself.

Fernandina Island, Ecuador – Named after King Ferdinand of Spain, the youngest of the Galapagos Islands is also the furthest from the other islands in the region. Fernandina is situated about 804kms from the mainland of Ecuador. This active shield volcano, named because of its resemblance to a warriors shield, has been erupting since 2009. There is not much life on the island but a narrow stretch of land is occupied by hundreds of marine iguanas. The Narborough Island tortoise which was thought to be extinct was also spotted on the island in February 2019, after 113 years.

Another shield volcano of the Galapagos Islands is the remote island of Floreana, named after the first president of Ecuador, Juan Jose Flores. The southernmost island of the Galapagos is about 1000kms from the mainland of Ecuador and has a population of about 100 people. An act of arson in 1820 by the helmsman of a whaling ship destroyed much of the flora and fauna of the island, resulting in the extinction of some species. Although situated so far from the mainland, the island has had its fair share of controversy. In 1932 strange disappearances and deaths of a few of the inhabitants who had made the island their home, piqued the interest of the outside.

Halfway between Antarctica and New Zealand is this UNESCO World Heritage Site which was accidentally discovered by Australian Briton, Frederick Hasselbourough in 1810. The reason why Macquarie Island was listed by UNESCO is because of the rocks from the earth’s mantle that are exposed above sea level, the only place on the earth with this phenomenon. The island is about 1,130kms from Invercargill in New Zealand but is a part of the Tasmanian State Reserve.

The largest of the Kermadec Islands lies about 1,447kms from the mainland of New Zealand. Although Raoul island is large enough to support settlement, the lack of a safe harbor has kept people away. Once thought to be uninhabited, recent discoveries of Polynesian artifacts indicate that a community once briefly thrived on the island. The last known occupants of the island Tom Bell and his wife Frederica were forcibly evacuated by the New Zealand government in 1914 after they had lived on the island for 36 years. Since 1937, Raoul Island Station has permanently been manned by the government of New Zealand.

Uninhabited, deserted and almost completely covered by a glacier, is the subantarctic island of Bouvet. Located approximately 1,700 kilometers from Antarctica, the island is possibly one of the most remote islands on earth. The island which was claimed by Norway in 1927, was first spotted by a Frenchman Jean Baptiste Charles Bouvet de Lozier in 1739. It was declared a dependency of Norway in 1930 after a dispute with the United Kingdom.

One of the largest coral islands in the world is the remote island of Niue in the South Pacific Ocean, 2,400kms northeast of New Zealand. Commonly referred to as ‘The Rock,’ the island is an autonomous state in free association with New Zealand, although Niueans are citizens of New Zealand. The island has been occupied by Polynesians from Samoa since 900 AD and settlers from Tonga since the 16th century.

Tristan da Cunha is the only inhabited island of a remote group of islands in the south Atlantic Ocean. Lying approximately 2,432km off the coast of Cape Town, the only way to reach the island is by a six-day boat journey from South Africa. The islands were first sighted by Tristao da Cunha, a Portuguese explorer in 1506, but a confirmed landing was only made in 1643 by the Dutch. In 1810, the first permanent settler Johnathan Lambert from Massachusetts, United States moved to the island and in 1867, the main settlement was named Edinburgh of the Seven Seas by Prince Alfred, son of Queen Victoria.

Just over 600 people inhabit the Australian Keeling Islands located about 2,750kms from Perth in Australia. The territory is made up of two atolls comprising 27 coral islands. Only two of these islands, Home Island and West Island are inhabited by Cocos Malays, descendants of the Malay workers who had been brought to work on the island by a Scottish merchant. Although the islanders have a degree of self-governance, Western Australian law applies.  Settlements on the island only occurred in the early 19th century though the islands had been discovered by William Keeling in 1609.

The only settlement on this remote French island located in the southern Indian Ocean is the research station Martin-de-Vivies, the seasonal home of about 30 researchers and staff. The island was first seen in 1522 by a Spanish explorer but it was named more than a century later by a Dutch mariner. In 1633, the island was named after the mariner’s ship, Nieuw Amsterdam. However, in 1924 the islands became a part of the French colony of Madagascar and remained so till 1955. The island is located about 3,200kms from Madagascar and Australia.

The group of islands that make up the Kerguelen Islands is also located in the southern Indian Ocean. Lying more than 3,300kms away from Madagascar, the Kerguelen Islands are so remote that they are often referred to as the ‘Desolation Islands.’ Like the Ile Amsterdam island, these islands are also a part of the French Southern and Antarctic Lands. Though there are no indigenous inhabitants on the islands, a permanent presence of 45 to 100 French soldiers, researchers, engineers, and scientists is maintained on Kerguelen. The islands are not an easy place to live in with a raw and chilly climate the year-round.

Another of the world’s unsolved mysteries is the gigantic stone moai located on one of the most remote islands of the world, the Easter Island. Although many theories about their exact significance have been put forward, there is no written or oral history about them. This UNESCO World Heritage Site in the southeastern Pacific Ocean is 3,512kms away from central Chile. Around 1200 AD, Polynesians are thought to have arrived on the island and thrived here for a few centuries. However, rampant deforestation resulted in a reduction of the island’s population. The arrival of the Europeans and the slave trade brought the population down to a mere 111 native inhabitants in 1877. The island was annexed by Chile in 1888, and in 1966, the indigenous Rapa Nui were granted Chilean citizenship.

With the mainland of New Zealand being 5,455kms away, Pitcairn Island wins hands down for being the most remote island in the world. No wonder it was chosen as the hideout for the mutineers of the Bounty. Anyone familiar with the story of the ‘Mutiny on the Bounty’ knows about the Pitcairn Islands. In 1790, the island became home to the nine mutineers of the British ship the Bounty along with the Tahitians who accompanied them. They set fire to the Bounty and remained on the remote island without any outside contact until 1808 when the American sealing ship Topaz visited the island. Today, most of the 50 residents of the island are direct descendants of the mutineers and share the same surname.