11 Largest Chains of Hotels in the World 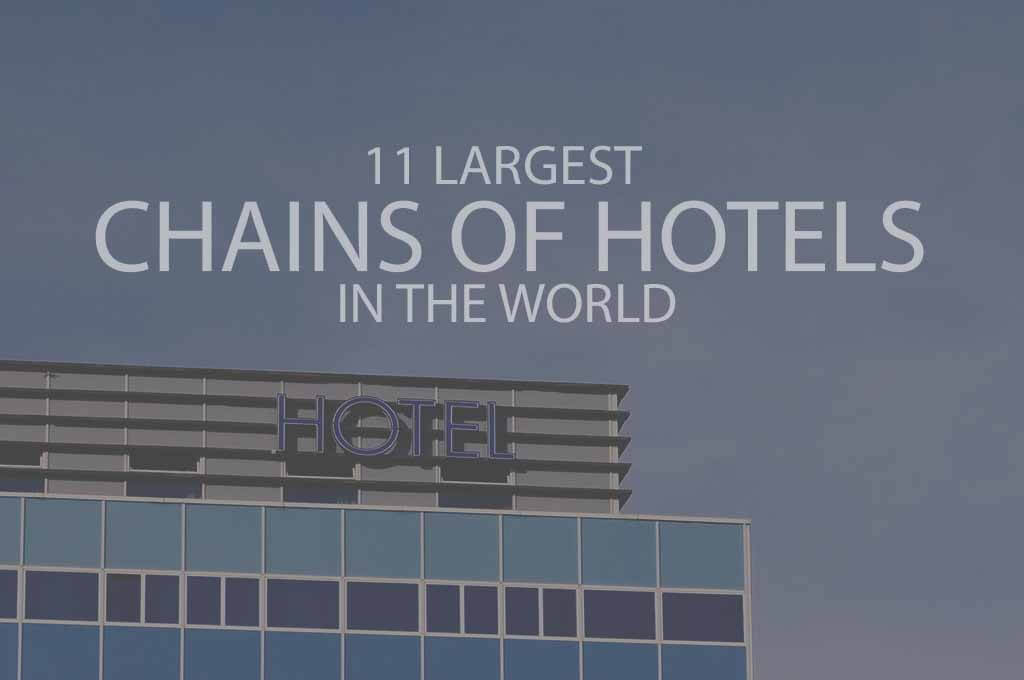 Earlier, hotels were simply places that weren’t your home and where you could spend the night at. But as time has passed, the concept of hotels has evolved drastically. Today, it’s a part of the lifestyle, whether you’re a business or leisure traveler. The hotel industry has transformed into one of the world’s finest businesses with ever-escalating demands. Most hotels are localized to where they’re located with a single outpost. However, there are hotel chains with franchised locations globally. The options for the biggest and largest chain of hotels in the world have outposts in major cities across the globe. What’s more, they’re known for a standardized degree of comfort, service, and amenities. They range across multiple pricing classes, from luxury to economy, with midscale and boutique hotels somewhere along the spectrum. That’s why these hotel chains have a staunch following.

Chain hotels usually guarantee you the familiarity of staying. If you liked staying at one outpost, the chances are that you’ll enjoy your stay at another location as well. That’s true even if it lies on the other side of the world. So, if you’re planning to become a patron of one of the world’s most well-known hotel chains, you should know which ones to choose from. To that end, here is a list of the options for the biggest and largest chain of hotels in the world.

Wyndham Hotels & Resorts is the largest chain of hotels in the world. Their origins go back to 1981 in Dallas, when the Wyndham Hotel Corporation established the company. Later on, the brand transformed into the Wyndham Worldwide Corporation, with headquarters in New Jersey. Today, the brand owns hotels across the spectrum, right from upscale and boutique to midscale and economy ones. What’s more, it has one of the largest numbers of properties on this list, with more than 9,000 hotels. However, their global footprint is much smaller, with properties found in 75 countries. Moreover, their annual revenue is 5.5 billion USD. The brand is a generous hotel chain, focusing heavily on customer loyalty using rewards. Furthermore, it’s known for gifting frequent guests with free nights, gift cards, and even free airline tickets!

One of the brand’s most famous economy offerings is Super 8 by Wyndham. For instance, the Dallas outpost is one of the best jacuzzi-in-room hotels in Dallas.

Marriott International is one of the world’s biggest chain of hotels. The brand’s origins were a humble “motor hotel” with a motel and a root beer stand. Alice S. Marriott and J. Willard were the pioneers of this motor hotel in Washington, D.C., way back in 1927. Today, it boasts a whopping annual revenue of 21 billion USD, with its hotels spread across 131 countries. If that wasn’t enough, their rooms are more than 1.4 million! The brand crossed the million mark when it merged with Starwood Hotels and Resorts in 2016. Plus, this number doesn’t include their rental home side of the business. Some of Marriott’s most well-known brands include Autograph Collection, Fairfield by Marriott, Aloft, Gaylord, Renaissances, Ritz Carlton, and Sheraton.

Marriott prides itself on luxury and hospitality with values that speak to a specific demographic as a hotel chain. Furthermore, it also cares about social issues, ranging from sustainability and eradication of poverty to community development and diversity.

Hilton, which is named for its founder Conrad Hilton, is the largest chain of hotels in the world. It trails Marriott by a hair, featuring more than 5,000 hotels in some 100-odd countries. What’s more, it has some famous hotel brand names under its belt, such as DoubleTree, Astoria, and Hilton itself. Conrad Hilton found his start in the hospitality industry way back in 1919. Today, many Hilton properties focus on lifestyle and luxury, with amenities that appeal to the jet-set. What’s more, the brand is especially popular with business travelers, who’ll find Hiltons located in convention centers, near airports, and in all major cities. Currently, the hotel chain is focusing on expanding in Asia and the Baltic States, with new properties planned in Estonia, Serbia, Bangladesh, and Burma.

It’s no surprise that the company has annual revenues of over 11 billion USD and is ranked 36 in Forbes Magazine’s list of the largest privately-held U.S. companies. And, of course, their properties rank amongst the best in the world’s major cities. For instance, one of its hotels is among Las Vegas’ tallest hotels, while yet another property is one of Reno’s top gay-friendly hotels.

The Paris-based French hotel chain Accor‘s origins go as far back as the 1960s. Today, it has an annual revenue of more than 6 billion USD with ownership of properties such as Motel 6, Pullman, Novotel, and Sofitel. Currently, they have more than 4,800 hotels in 100 countries and span the gamut from 5-star properties to economy lodges. It even has Raffles under its umbrella, with its hotels ranging from Singapore’s best hotels to the most expensive hotels in Dubai. This contrasts with other French hotel brands that skew toward luxury properties. It’s no wonder that it’s Europe‘s single largest hospitality company and the sixth-largest in the world. If that wasn’t enough, the brand also has a network of co-working standalone offices and its hotels under the Wojo brand.

Choice Hotels International is one of the largest chain of hotels in the world. The brand began in 1939 as a marketing cooperative known as Quality Courts United and was the United States’ first hotel chain. What’s more, it was also a pioneer in guaranteeing reservations, having 24-hour front desks, offering in-room telephones, and developing a global hotel iPhone app. So, it comes as no surprise that the brand has more than 7,000 properties across 41 counties on multiple continents. Plus, it owns some of the most famous hotel brands in the world, including Ascend Hotel Collection, Quality Inn, Rodeway Inn, and even EconoLodge. With more than 600,000 rooms on offer, the company rakes close to 1.1 billion USD in revenues.

Best Western Hotels & Resorts, whose headquarters are in Phoenix, Arizona, boasts half of their 400,000 units in North America alone! What’s more, it has close to 4,200 hotels across 90 countries that command annual revenues of close to 6 billion USD. But that’s not all. The hotel chain, which began way back in 1946, is currently focusing on expanding its presence in Asia and the Middle East. It owns hotels that range from luxury to economy brands, including the WorldHotels Collection, the BW Premier Collection, and Best Western. Since the hospitality giant’s hotels all bear the “Best Western” moniker, the Western, Western Plus, and Western Premier levels determine the kind of amenities at each property. It’s no wonder that Best Western’s hotels range from the best Santa Barbara boutique hotels to the best cheap NYC hotels.

The InterContinental Hotels Group is the largest chain of hotels in the world. The brand traces its roots back to 1777, when William Bass originally opened a brewery in Burton-on-Trent in England. When his business grew, he entered the hotel sector by acquiring the Holiday Inn International company in 1988. He followed that by acquiring the North American branch of Holiday Inn in 1990. Today, with close to 900,000 units, IHG draws an annual revenue of more than 2.1 billion USD. What’s more, it has 5,700 resorts and hotels spread over 100 countries. If that wasn’t enough, IHG has 14 brands ranging from luxury to midscale hotels. These include everything from the Six Senses resorts (amongst the world’s most expensive hotels) to the Crowne Plaza Hotels, Candlewood Suites, and Holiday Inn.

Even though G6 Hospitality‘s hotels and resorts are currently only in the United States and Canada, the company has plans to expand to Mexico, Central America, and even Colombia. A product of The Blackstone Group Inc., the brand began its journey in 1962 and has 1500 hotels. That’s a fantastic number, considering they have their hotels in just two countries! With more than 110,000 units, they generate annual revenues of almost 495 million USD.

The company, which started its journey in Santa Barbara, originally began as a cost-effective motel that charged its visitors just 6 USD per room per night. That’s what influenced the name of one of its brands, Motel 6. Along with Studio 6, that made the brand the forerunner in the economy lodging segment.

Red Lion Hotels is the largest chain of hotels in the world when it comes to brands in only the United States and Canada. This hotel operates 1,400 hotels in British Columbia and 18 states in the U.S. Red Lion, which began in 1959 in Oregon, now has headquarters in Denver, Colorado. What’s more, they have more than 90,000 units and generate a revenue of 114 million USD. Plus, Red Lion’s hotel brands range from upscale to economy and include big and popular names such as Red Lion Inn Suites, Knights Inn, and America’s Best Value Inn. Finally, it also has the Signature Inn, an affordable boutique hotel range under its umbrella.

The Radisson Hotel Group started its journey in 1962 in Denmark and is owned by Jin Jiang International Holdings Company Ltd. It expanded to the Americas in the same year, and now they boast close to 200,000 units across 1100 hotels in 115 countries! It’s no wonder that their annual revenues are close to 1.2 billion USD. The hotel’s brands include luxury, upscale, midscale, and even boutique hotels; a case in point the art’otel. What’s more, they also include Radisson Blu, Park Plaza, and even the Country Inn & Suites. Their loyalty program, which is named Radisson Rewards, and the brand has been quietly finalizing huge expansion plans. For instance, Radisson wants to reach more than 50 hotels in Turkey by 2023 (as opposed to their earlier plan of 2025). It even debuted its first hotel in Ghana this year.

Headquartered in Chicago, the Hyatt Hotel Corporation is the largest chain of hotels in the world. With just 1,100 hotels and resorts across merely 69 countries, the group rakes in annual revenues of more than 4.33 billion USD! What’s more, its hotels are spread on every continent except Antarctica – now, that’s something. Like other brands, Hyatt also has humble origins. It began as a motel next to Los Angeles International Airport in 1957. Consequently, it became an international company in 1969 with Hyatt Regency in Hong Kong. Hyatt’s brands range from luxury to upscale and have all-inclusive options too. These brands include Joie de Vivre, Hyatt Place, Hyatt Regency, Grand Hyatt, and even the Andaz hotels.