The 11 Most Beautiful Places In Jordan 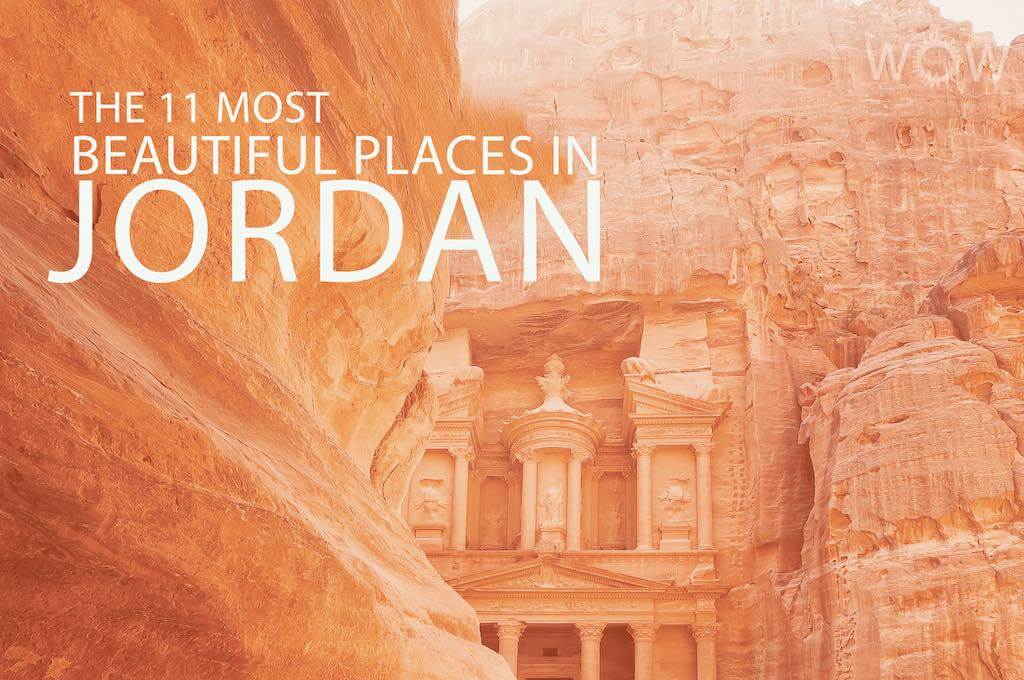 Barring a small 26km stretch of coastline to the south, the Hashemite Kingdom of Jordan is a landlocked country with some of the most contentious nations at its borders. Despite the turbulence that surrounds it, Jordan has remained an oasis of calm and is one of the safest countries in the Middle East, Asia. Renowned for its hospitality, Jordan has had many different nationalities pass through its lands, leaving behind a substantial mark of their culture on the land. The country is home to over 100,000 archaeological and tourist sites including Biblical and Islamic sites and those left behind by the Romans. It is also home to one of the amazing Seven Wondersam of the World, the pink-hued necropolis of Petra as well as other fascinating natural sites like the Wadi Rum. There is much about the beauty of Jordan that will leave a visitor awestruck.

One of the most spectacular sites in the world and Jordan’s most impressive landmark is the ancient city of Petra, hidden from the world for several centuries till it was rediscovered in 1812. The earliest historical mention of the ancient city recorded by various Greek historians was in 312 BC, although Petra is believed to have been settled as early as 9,000 BC. The Nabataean kingdom eventually fell to the Romans and its importance gradually declined. This Wonder of the World is also one of the most important cultural heritage sites of UNESCO. There is much that will leave visitors to the site enthralled. From the royal tombs that are carved into the rock face to the easily accessed High Place of Sacrifice, the theater, the monastery, and the treasury, the sheer scale of excavation and skill involved in creating this magnificent ‘rose city’ will leave one spellbound. No wonder, it’s one of the 11 Places That Look Like They Are From Another World.

Al Siq is a canyon and the most ancient entrance to the world heritage site of Petra. It is a narrow 1.2km long and narrow canyon with stunning walls as high as 200 meters that end at the Treasury of Petra. It’s fascinating to observe how the canyon was pulled apart by tectonic forces as the two matching parts of rock on either side are clearly visible in many places. One can also see the original channels that were used to bring water into Petra. In fact, the 2000-year-old terracotta pipes are still visible in some places.

One of Jordan’s significant tourist destinations is the Wadi Rum, a valley that has been eroded into sandstone and granite rock. The area is everything you’d expect a desert to be with its extreme climatic conditions and stretches of sands, but what sets Wadi Rum apart is the chiseled canyons, natural caverns, and beautiful sandstone arches. Many visitors choose to stay overnight to experience the novelty of sleeping under the stars in this beautiful barren landscape.

An intense blue color gradually fading into an emerald green at the shore is what greets visitors to the lowest point on earth, the Dead Sea. This salt lake bordered by Jordan, Israel, and the West Bank is devoid of any form of marine life due to the extremely high salt content. Besides itself being quite a spectacle, the Dead is a great place to catch a stunning sunset.

This elevated ridge of the Abarim mountain range is believed to be the place where Moses saw the Promised Land that he was forbidden to enter. A church was built on Mount Nebo in the 4th century to honor Moses who is also thought to have been buried here. The original church was later converted into a Byzantine monastery in the 6th century AD. Although the original building did not stand the test of time, the beautiful mosaics from this period are still visible inside the Moses Memorial Church on the summit. Besides the Biblical history associated with the site, the views from the top of the Dead Sea, West Bank and the River Jordan are quite spectacular.

Jordan’s capital may seem like any other urban city with its flashy buildings, traffic, and people but interspersed with modern architecture are quite a few of the most spectacular historical sites. East Amman is where most of the historical sites are located. Some of the most stunning sites to visit are the 6,000 seats Roman theater built in 100 AD, the Temple of Hercules at the Citadel, and the Umayyad Palace. Modern-day Amman too has its attractions like the famous Rainbow Street and Souk Jara. Make your visit unforgettable by staying at the best hotels in Amman.

The largest and most alluring Roman site in Jordan is the ruined city of Jerash about 50km from the capital city Aman. What makes Jerash even more special than most other ancient Roman sites in the Middle East is how remarkably well it has been preserved. The site can be quite overwhelming as it is spread out over a huge area but it should definitely make it to your itinerary. Some of the main attractions here are Hadrian’s Arch at the extreme south of the site, the hippodrome, and the Temple of Zeus built around 162 AD. Also noteworthy is the huge forum with fifty-six columns around the paved limestone, the Temple of Artemis and the two amphitheaters.

The town of Umm Qais located in the northwest of the country near the border of Syria and Israel was once known as the ancient city of Gadara. Perched on a hill at a height of 378m above sea level, the town has magnificent views of the Golan Heights, the Yarmouk River, and Lake Tiberias. It is one of the most spectacular of the ancient Greco-Roman cities of the Decapolis and also supposed to be the place where Jesus performed the miracle of the Gadarene swine. The West Theater constructed from black basalt is one of the more striking structures of the ruins. Rather interestingly, the ancient Roman ruins are juxtaposed with an abandoned Ottoman-era village.

With only 27km of coastline, Jordan’s seaside is obviously a big draw for visitors. The 13th century Red Sea resort of Aqaba is worth visiting to discover some of the most spectacular coral reefs in the world without the crowds that descend on Eilat. The town is a popular stopover for people on their way to Petra or Wadi Rum but it is also renowned for its water sports and great scuba diving. The sixth tallest flagpole in the world standing at 137m is also clearly visible on its shores.

This breathtakingly beautiful canyon which extends for 70 kilometers is often referred to as the ‘Grand Canyon of Jordan.’ The Wadi Mujib towers over the Mujib River, which flows into the Dead Sea. It is believed to be the path that Moses walked through when it was known as the Arnon Valley. The canyon forms part of the Mujib Biosphere Reserve which is characterized by hidden pathways, rugged gorges, and sculpted valleys. Visitors can also walk along the Mujib River straight to the Dead Sea.

The largest nature reserve of Jordan is a hidden gem with its diverse terrain and spectacular landscapes. The diverse terrain of the region ranges from an elevation of 1700m sandstone cliffs to protected valleys and a low lying desert area of Wadi Araba. Sandstone, granite, and limestone that make up the geology of the region add to its beauty. One of the best times to visit the reserve is in spring when the hillsides are blooming with flowers.