The 12 Tallest Flagpoles In The World 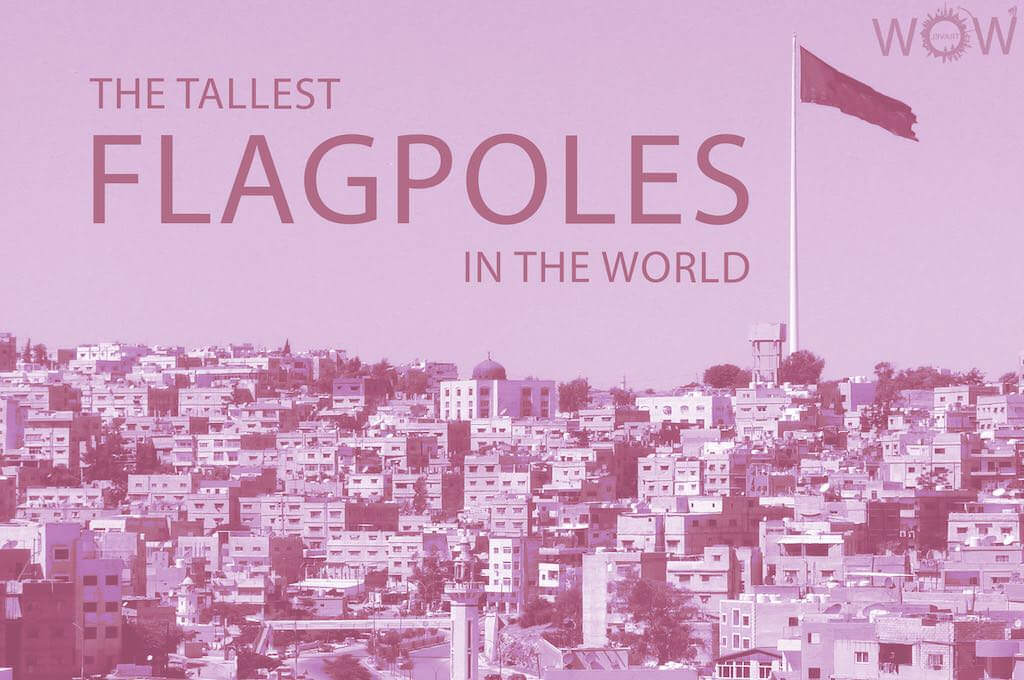 Tall, taller, tallest! The race to have the tallest or biggest structure in the world is nothing new. Taller towers, higher buildings, and bigger bridges never cease to amaze us as countries showcase their building prowess year after year. The latest entrant into this race for supremacy seems to be the humble pole. From a 100-meter tall pole that left us in awe to a taller one at 160 meters in 1980, the tallest flagpoles in the world now stand even higher.

In a bid to showcase their patriotism, certain countries around the world have made sure that their flags are visible from every corner of the city, fluttering as high as a skyscraper. But, where is the world’s tallest flagpole? Rather interestingly, almost all these towering poles are in Asia. Keep reading to see the world’s tallest record!

Kuala Lumpur has the distinction of being the first country to have one of the tallest flagpoles in the world. The construction of this 95-m (312-ft) tall flag pole in Merdeka Square took place at the same spot where the Malaysian flag was hoisted for the first time after the Union Jack was lowered. Subsequently, that marked the independence of Malaysia. And this is in line with the name of the square where the pole stands, Merdeka, which in Malay means “Independent.”

This flagpole held the world records title as the tallest until the one in North Korea superseded it in 1980.

Standing at Fort Lake in Belgaum or Belagavi, India, the tallest flagpole in the country is 110 m (360 ft) tall. Its inauguration was in March 2018. Consequently, it surpassed the Indian flag at the Attari-Wagah border near Amritsar by just one foot.

In March 2017, the Indian government proudly unfurled the tallest flag at Attari. Unfortunately, strong winds resulted in severely damaging the flag. As a result, they had to replace it four times.

Acuity flagpole is located on the headquarters of the Acuity Company’s campus between Milwaukee and Green Bay in the United States. And it’s said to be 100 feet taller than the Statue of Liberty. At 120 meters, the pole is touted as the tallest in the world that flies an American flag.

Each stripe of the iconic flag is over 1.5 meters high, and each star is about a meter wide. Unfortunately, during bad weather, the flag is taken down. It also flies at half-mast during official observances.

Sharing the 8th spot with Abu Dhabi is Pakistan’s flagpole at the Wagah border. Similar to the ‘flag war’ between North and South Korea, Pakistan went one up on India when it hoisted a 122-m (400-ft) high flag on August 14, 2017. Indeed, it was during the 70th independence day celebrations. And in March of that same year, India inaugurated another tall flagpole at Attari, about two miles from Wagah.

Wagah sits on the historic Grand Trunk Road between Lahore and Amritsar in India. Besides being the home to the flagpole, this village is known for the border crossing ceremony of Wagah and Attari. The ceremony is held every day, two hours before sunset. It’s conducted by the Indian Border Security Force (BSF) and Pakistan Rangers.

This giant pole stands at 122 m (400 ft) on the Corniche breakwaters in Abu Dhabi. In fact, it was once the tallest free-standing flagpole in the world. Even though it’s no longer THE flagpole, it’s hailed as the inspiration for spearheading the quest for the tallest flagpoles in the world. It was erected in December 2001 to commemorate the country’s 30th national day and claimed the top spot until 2003.

The Raghadan Flagpole in Amman, Jordan, is made of steel. It stands on the Raghadan Palace grounds. The official inauguration of this 126.8 m (416 ft) pole was by King Abdullah II of Jordan on June 10, 2003.

The flag is visible from more than ten miles away. Moreover, it’s more visible when it’s illuminated at night. Unfortunately, the noise created by strong winds is so great during bad weather. As a result, the authority has to lower the flag from time to time.

Here’s another one from Jordan. Standing close to the seashore at a height of 130 m (430 ft), the Aqaba flag is visible from three countries – Israel, Egypt, and Saudi Arabia. Indeed, that alone puts it on our top things to do in Aqaba. Constructed in 2004, the flagpole flies the flag of the Arab Revolt. It commemorates the 1917 Battle of Aqaba in Jordan.

Aqaba plays an important part in trading with its neighboring countries. Moreover, it’s the gateway into the wonderful dry world of Wadi Rum.

The 5th tallest free-standing flagpole in the world stands at 133 m (436 ft) in Ashgabat, Turkmenistan. The flag went up for the first time on June 29, 2008. And like many countries that were once a part of the USSR, Turkmenistan erected the tall flagpole to commemorate the historic milestone of their separation from it.

Located in a huge square by the Arcabil and Candybill Frontage Roads, the pole is on everyone’s things-to-do list in Ashgabat.

In the 1980s, the “flagpole standoff” between the Koreas saw North Korea go one up on the South by building this towering pole in the ‘propaganda village’ of Kijongdong. Prior to this, South Korea had built a 98.4-m tall flagpole that flew a 130-kilogram flag in the opposite village of Daeseong-dong. North Korea’s response was a 160-m (520-ft) tall flagpole waving a huge 270-kg flag. Consequently, this one became the tallest in the world and held onto the spot for about two decades.

However, many lists don’t record or even mention Panmunjom in their content due to the fact that it’s not a free-standing pole. As you can see in the image below, it’s a supported type of pole.

Among the rest of the world’s tallest flagpoles, this one looks more striking as it’s surrounded by nothing but fields and small buildings. And people can see it clearly from the North Korean side of the DMZ. Visit the South Korean side via this Day Trip from Seoul tour.

The 162-m (531-ft) high flagpole in National Flag Square Baku, Azerbaijan, holds a flag measuring 70 x 35 meters. It was the tallest flagpole in the world before the other taller poles existed. As a matter of fact, the same American-affiliated company that built the one at Dushanbe also built this one.

As of June 2019, the National Flag Square has been closed to the public. According to people in the region, the flag has been taken down, and a taller structure will take its place. With that said, let’s not make the absence of the flag a reason not to visit Baku. In fact, we have eight reasons here on our list of things to do in Baku.

The Dushanbe flagpole was the world’s tallest flagpole in 2011, standing tall at 165 m (541 ft). It continued to remain at the top until it the one in Jeddah upstaged it in 2014. Fabrication of the sections of the pole was completed in Dubai by a San Diego company, Trident Support. In fact, this company is also behind the construction of the National Flag Square Flagpole we previously mentioned.

After the construction, the pole was shipped to Dushanbe, where construction began on Tajikistan’s National Flag Day, November 24, 2010. Perhaps you should mark that date on your list of things to do in Tajikistan?

The construction ended on May 24, 2011. And the flag that proudly flutters from this pole weighs a massive 700 kilograms (over 1500 lbs).

The tallest flagpole in the world is located at King Abdullah Square, where you’ll find most of the top things to do in Jeddah Saudi Arabia. Standing at a towering 171 m (561 ft), the flagpole knocked every other country out of the competition for the title of the tallest in the world.

This free-standing flag was built in three stages, beginning with the base and the creation of a twenty-eight-meter picket. Furthermore, in the second stage, the base was further strengthened. And then, the fifteen-ton vertical column was finally fitted and it’s all complete on September 23, 2014. The Saudi Arabian flag which is flown from this pole, weighs five hundred and seventy kilograms.

Facts about the tallest flagpoles in the world: